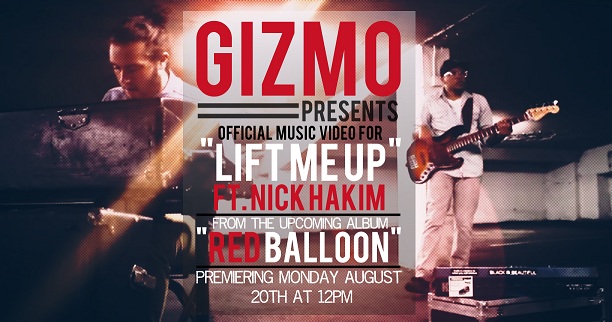 Most musicians wait a lifetime to share stages with their musical heroes. Hoping to accomplish such a feat while still racking up college credits would be considered nothing more than a pipe dream. But having performed with such esteemed artists as Meshell Ndegeocello and Talib Kweli as well as serving as music director for shows with Bilal and Lalah Hathaway, it’s safe to say that 21-year-old Kenneth “Gizmo” Rodgers has been living that dream for quite some time now. With a wealth of experience that belies his years touting a vast array of musical influences spanning the realms of jazz, pop, funk, rock, Latin, Gizmo is set to unveil his debut sonic masterpiece Red Balloon. Produced by Derrick Hodge, musical director for Maxwell and bassist (Robert Glasper Experiment, Kanye West, Maxwell, Common) with glints of hip-hop and soul, Red Balloon is a wondrous 13-track odyssey through the multi-faceted human experience.

The album’s expansive and mesmerizing second single “Lift Me Up” produced by Gizmo and featuring Washington D.C rising vocalist Nick Hakim is a tune reminiscing on past experiences, pondering the future and centered on the universal question of what happens after we leave the earth. The music video depicts images of people from various cultures and socio-economic backgrounds, showing that regardless of the things that separate us, we all strive for happiness.

In addition to his own bass prowess, Red Balloon finds Gizmo contributing percussion, keyboards, and stepping behind the microphone for the first time as a singer. Following the advice of good friend Meshell Ndegeocello, Gizmo is featured singing lead vocals on cuts such as “Dancing,” “Insane,” and his enthralling rendition of the 2008 Kings Of Leon hit song “Use Somebody” (produced by Gabo Lugo). Red Balloon will be released in association with progressive jazz boutique brand Revive Music. Red Balloon also includes a little help from Berklee friends such as Nick Hakim, Darien Jovan, and BET’s 106 & Park Wild Out Wednesdays featured artist Gwen Bunn. Hip-hop artist/ Berklee professor Brian “Raydar” Ellis drops rapid-fire verses on the funky head nod excursion &ldq uo;Invalid.”

Of the project’s captivating central theme, “When you see a little kid let a balloon go at a carnival, everybody kind of looks up at it as it floats away, the balloon seems to float around, trying to find its way. I feel like that’s how most people are. We’re all trying to figure out who we are, what we want to do, and what we stand for. All striving to be special, loved, or valued in some kind of way. And everybody’s kind of watching you as you float around this life. But if the pressure gets too high, it pops at some point.”

The rising star who regularly performs to sold-out shows on the East Coast has managed to already secure endorsements from an impressive list of bass equipment and accessories companies such as Aguilar Amplifications, Mono Case, Dean Markely Strings, and Levy Leathers.

Buttressed by the contributions of a vibrant collective of mentors, colleagues, and classmates, Red Balloon stands firmly as a dynamic undertaking by a promising young artist. Coalesced by Gizmo’s own unique talent, it is a brazen statement from a new cadre of artists seeking to meld their formal jazz training with new sounds and modalities. It’s clear that Gizmo and Red Balloon are representative of this group of artists in a chapter of change with an allegiance to the groove.