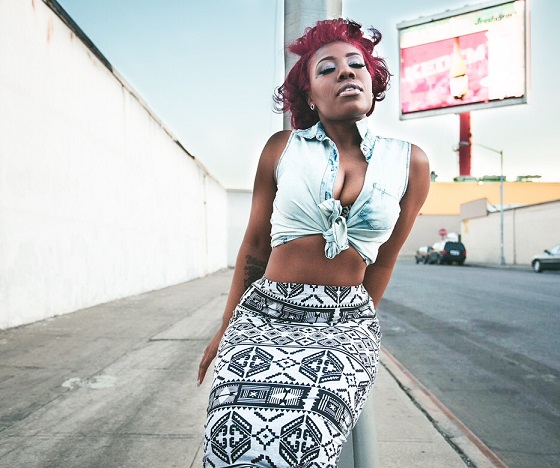 Stagnation… Stifling… Oppressive… An industry trapped in an endless loop of predictable artist, and predictable music, a visionary steps out of the box and brings her own brand of music. Daring to challenge the preconception’s of not only an industry, but an entire planet comes the voice of one who is unwilling to settle. Straight from the belly of the beast, comes an artist an era in the making. The voice, a generation of women have been waiting for. Independent, gorgeous, edgy… The Music World’s new phenomena… Etta Mae.

Born Shauna Renee Young in Los Angeles, California; Etta Mae recalls the harsh road it took to get to where she is now. “Growing up all I could remember was eviction notices, being cramped in a one bedroom apartment with my radio. I would study my favorite songs by playing them over and over.” Etta Mae, the product of a broken home, her father left her and her mother when she was only two; this would be the beginning of Etta Mae’s hard and tumultuous journey. “My mother stopped enrolling me in school after 7th grade.” Etta Mae recalls. At 17, Etta got her G.E.D. Then applied and got accepted to Columbia College in Chicago. “I studied in Chicago for a year and had to drop out because I couldn’t afford to pay for the tuition and housing.” But this would not deter her in the slightest, no! Instead a fire started to slowly burn inside Ms. Shauna Young.

Before leaving school, Etta Mae was able to land an unpaid internship at Jive Records through her then professor, Gospel recording artist Donald Lawrence. She moved to Connecticut and lived with her grandmother. She would commute from Hartford to New York. A daunting task, but one well worth it for a lover of music she felt. “I use to beg the bus drivers to let me on the bus because I didn’t have any money.” And all of this was well worth it, because without even knowing it Shauna Renee Young was moving into the back seat; and Etta Mae would become the new driver.

Being at Jive inspired Etta’s musical intrigue. But she decided to keep her passion for singing a secret, pacing herself and perfecting her craft. With a wait on no one attitude, Etta Mae set out on penning her own songs. And this would ultimately lead to Etta Mae’s first hit single… “Faithful.” The song “Faithful” was inspired by a real situation going on in Etta’s life. “I was inspired to write faithful when my friend called me upset because she thought her man was cheating on her.” From this Etta Mae would become a student of people, their situation‘s, and their relationship‘s. In turn giving birth to her project currently under construction “Chuck”. For “Chuck” Etta Mae has enlisted the help of two up and coming producers; Justin Rose and Jordan Battiste. These two producers along with Etta Mae will be responsible for bringing “Chuck’s” one of a kind sound to life. With such songs as “Monster”, “Alive”, and “Mean” to accompany the already popular “Faithful”; the album promises to be a tour de force. Now with the goal set, and her purpose cemented, our heroine continues her amazing journey.

The sun shines brightly on the budding career of Shauna Renee Young. She has come a long way from those humble beginnings in Los Angeles, California. Still looking to perfect her craft, she takes it one day at a time; meticulously plotting out every step in her soaring musical career. Shauna has walked a journey that few can, a journey that few will. The girl that adopted her grandmother’s name Etta Mae, has now given new meaning to it, and new life to a genre stuck on repeat. The toughest journey’s yield the best artist. What better artist than a young woman surviving in a man’s world, chasing then living out her dreams. The American dream come true… Etta Mae