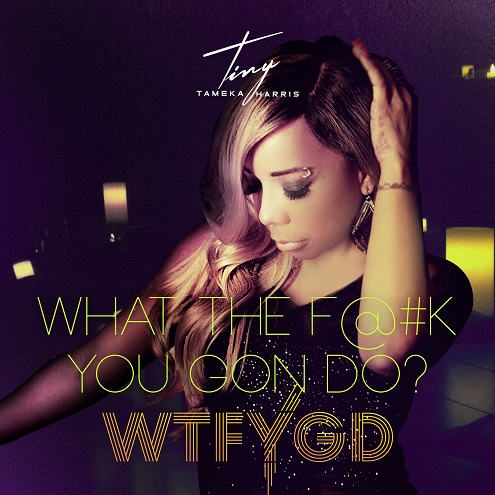 Tameka “Tiny” Harris, Grammy Winning Music and reality star and wife of hit making Hip Hop star TI, is making her return to music with the release of a new song and video, “What You Gon Do?” The release of the single and video on her Pretty Hustle label will strike a cord with the millions of fans who have followed her controversies in the media in recent months. What You Gon Do? is a women’s anthem which draws distinct emotions of women today. The song describes a woman who is struggling in a relationship. In the end she begs the question, WTFYGD? Harris wanted to release a song that is completely relatable to fans who have come to know her through her music and reality shows.

Harris arrived on the music scene at 15, as a member of Jermaine Dupri’s R&B group Xscape Their 1993 So So Def debut album Hummin Cumin at Cha sold over a million copies spawning two number one Billboard Hot R&B/Hip Hop Singles, Just Kickin It and Understanding. The group went on to release two more albums, Off the Hook (1995) and Traces of My Lipstick (1998). Over ten million copies of the albums were sold worldwide. Harris and Kandi Burrus co-wrote the 1999 run-away hit No Scrubs for R&B group TLC. The song scored a Grammy Award in 2000 for “Best Song of the Year” and topped the Billboard charts at #1 for 10 weeks. While on a hiatus from music in 2001, Tiny met T.I. while shopping at Lenox Mall in Atlanta. They have been together ever since and were married in 2010. Together they have built an entertainment empire which includes TI’s successful music career, her hit BET reality show, Tiny and Toya and VH-1’s TI and Tiny: The Family Hustle, a reality show based on her life with TI and their blended family which includes six kids. Tiny launched Pretty Hustle in 2009 and signed the OMG Girlz, a teen pop group featuring her daughter Zonnique and best friends Bajha Rodriguez and Breanna Womack. Meanwhile, Tiny continues to build her empire as an executive producer working on the launch of several shows including, The Real Hairstylists of Atlanta and a spinoff with her best friend and hairstylist, Shekinah Jo. She also has other ventures in the works, including a new flavored tequila, and an iPhone app.