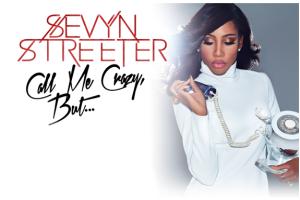 CBE/Atlantic recording artist Sevyn Streeter’s new EP “Call Me Crazy, But…” will be available via all DSP’s and retailers on December 3rd. “CALL ME CRAZY, BUT…” is highlighted by the new single, “It Won’t Stop” featuring Chris Brown, which has climbed to #1 on the iTunes R&B songs chart, marking Sevyn’s first time at number one on the chart as a solo artist! In addition to ascending the top 40 on Billboard’s “Hot R&B/Hip-Hop Songs” chart, the single has entered the Top 3 at Mediabase and on the BDS Charts and is receiving heavy rotation from urban radio outlets nationwide. The companion video for “It Won’t Stop”– directed by and starring the GRAMMY®-winning Brown, with a special guest appearance by Portland Trail Blazers forward Dorell Wright – has already received nearly 2 million views since its release earlier this month.

Sevyn is currently on tour with label mate K. Michelle on “BET Music Matters Presents The Rebellious Soul Tour with K. Michelle and Special Guest Sevyn Streeter.” Throughout the tour, Sevyn has visited Boys & Girls clubs in select cities, spreading music and a positive message to today’s youth. At a recent stop in Santa Monica, Sevyn engaged the kids in a sing-along to “The Way,” which she co-wrote for Ariana Grande.

Sevyn will co-host the BET & Centric red carpet pre-show for the 2013 Soul Train Awards. The Soul Train Awards airs Sunday, December 1st at 8p/7c in simulcast on BET and Centric with the red carpet pre-show kicking off at 7p/6c. While in town to film the show, which took place in Las Vegas this past weekend, Sevyn spoke during a GRAMMY Foundation Event Panel at the Andre Agassi College Preparatory Academy.