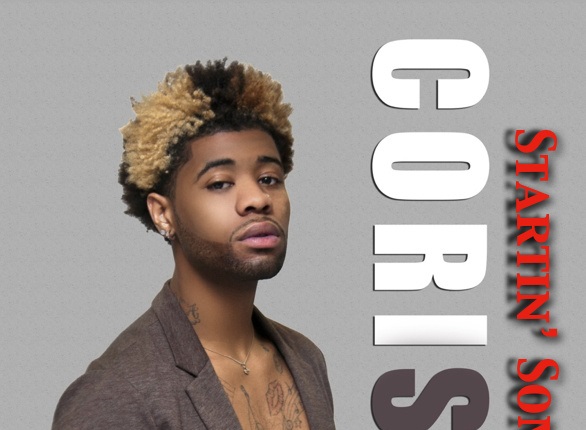 Cori Sims, born on January 16, 1991 in Omaha, Nebraska, but was raised in Atlanta, GA from an early age. Cori is an exceptionally talented young R&B and Pop vocalist with many aspirations, but recording and performing music is his first true passion. Cori was raised by his mother in a primarily single parent household, as his father was away the majority of the time serving in the United States Military. At the young age of 6, Cori’s vocal ability and affection for performing was recognized by his family, teachers, and peers, as he was consistently eager to take center stage in plays at school. In the years following, his energetic drive and outgoing personality enabled him to showcase his abilities at many different venues and performing arts centers across Georgia. In 2006, Cori began to take his craft more seriously, and started recording tracks with rap group D4L, whose hit single “Laffy Taffy” reached the top of the Billboard Hot 100 Chart that same year. In collaboration with D4L members Shawty Lo and Stuntman, Cori recorded “Valentine” which received ample airplay on local radio stations. It was this exhibition that instantly captured the interest of listeners, generating a local fan base and demand for more of the young singer’s recordings. Around the time of his 17th birthday, Cori’s ability to break ceilings and make things happen landed him the opportunity of performing in front of hundreds of fans at the Georgia World Congress Center, sharing a stage with Fantasia Barrino, Day 26, and many other talented artists. It was after this performance that Cori recorded the song entitled “Skye” with Grammy nominated producer Kenny Flav, who has help crank out hits for an impressive list of artists including Janet Jackson, Busta Rhymes, and Mary J. Blige. Cori continues to develop his artistic maturation by showcasing his gift at concerts and special events at various venues. Cori dedicates his time to pursuing his music career, which is quickly gaining momentum thanks to his diligent work ethic, his drive to succeed, but most of all his passion for music and performing. He released his first official single to the world called “Free” on August 24, 2012.

In the beginning of 2013, his management team and independent label of Sky’s The Limit Entertainment joined forces under a new distribution deal with Ingrooves/Fontana. His voice is a different kind of Pop/R&B that the world will love as he brings more of it through his debut album coming in 2013. On March 19, 2013 he will be dropping his highly anticipated single “She Bad” which features Platinum R&B artist AnthonyQ.
He recently was chosen to represent his label and management in the Film Industry Mixer at Metro Fuxon in Atlanta. He will be in TV productions such as TLC biopic movie that will be released on October 21, 2013, BET Let’s Stay Together, TVone’s R&B Divas Atlanta, and Love&Hiphop Atlanta this year and the new movie “Let’s Be Cops” coming to big screen 2014.

On August 10, 2013, Cori Sims released his debut music video for his brand new single “Startin Something” on Youtube and Vimeo. The video is directed by MarvL West, edited by Dontay Doma, starring leading lady Ms. Yasmine Renee. Choreography for the video was done by Alexander Gomez; dancers featured in the video are Brandon Forrest and Kyle Walker. The song itself was produced by The A-TEEM (Chin Chilla, DP, and Ike Boogie), vocal arranged and engineered by celebrity Songwriter TC, written by Songwriter/Artist Cori Sims and Kevin “Justice DaGrate” Frederick.

With his new found distribution deal, leadership, and work ethic of both parties, Cori is sure to take his music to another level.