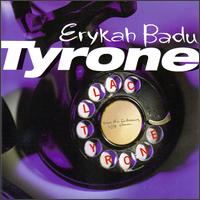 As we celebrate the release of her new album today, here is a Classic Vibe from Erykah Badu. While “Tyrone” might not be her biggest single, it is certainly one of the most recognizable ones from her due to its audacity. This was released as a single from her “Live” album which eventually would go double platinum on the strength of this radio hit. She was actually pregnant at the time of the recording of this “Live” album with Andre 3000’s baby, and although there relationship would end sometime in the late 90’s, we cannot confirm if this song was written about him!