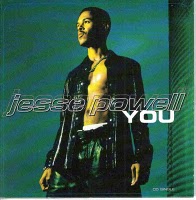 I was talking to someone recently about r&b artists that basically disappeared and one name that came up was Jesse Powell. As a result, I thought I’d do some investigating by starting out with his biggest hit “You.” He has released four albums to date, with the last coming in 2003, and his bio doesn’t give any further clues about what he’s been up to since then. I do know that after releasing “You” in 1998, none of his singles after that even managed to reach the BillBoard r&b Top 50. Unfortunately, looking at his release history, this is someone who the mainstream might consider to be a one hit wonder.