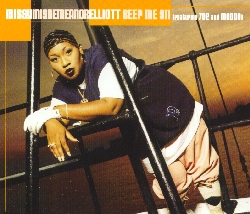 I’ve always had a great deal of respect and admiration for Missy Elliot; she’s never been afraid to try something new or been hesitant to come off looking straight up weird. In the process, many including myself would consider her a pioneer. Additionally, if you haven’t followed her career closely, you might not have known she’s also a very talented singer in addition to rapper; as evidenced in this song. This was the third single released from her debut album “Supa Dupa Fly” and although it wasn’t one her biggest hits, it is a personal favorite of mine.