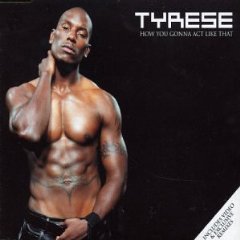 When we read that “How You Gonna Act Like That” was Tyrese’s biggest hit to date according to the Billboard Charts, we were a little surprised. That’s not a knock to this song at all but more of a testament to how much we like “Sweet Lady” and “Lately” off of his debut album. It should come as no surprise that as the years have gone by, he’s focused more on his acting career than his singing career. After all, he took the opposite path of most artists today, he made the move to music after being an actor first.