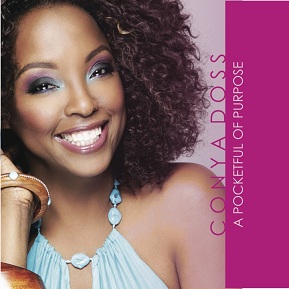 (Los Angeles, California – April 24, 2012) There’s a reason Conya Doss looks so comfortable onstage, gently swinging her hips like a day lily caught in a summer’s breeze, singing in a voice that’s equal parts honey and hellfire. It’s because she’s used to it. As a teacher of children with special needs within the Cleveland public school system, this thirty something soul songstress faces an audience tougher than most, nearly every day. Of late, this audience has also come to include throngs of R&B and neo-soul aficionados enticed by the Cleveland native’s sweet, supple delivery and heartfelt lyrics.

Nestled between Indiana and Pennsylvania, lies a state that has yet to be fully tapped of it’s musical capacity. In a region whose lineage reflects that of Babyface, Bone Thugs-N-Harmony, Tracy Chapman, Marilyn Manson, Gerald Levert, The O’Jays, Macy Gray, James Ingram, Roger Troutman and Zapp, The Gapp Band and Avant among others – Conya Doss has emerged over the past decade as Ohio’s top female vocalist – garnering praise from USA Today, VIBE, Billboard and Complex Magazine. Much like what her predecessors Erykah Badu, India.Arie and Jill Scott did for Dallas, Atlanta and Philly, Doss is putting Cleveland back on the soul music map. Having graced the covers of numerous local publications, regularly performing to sold out venues and garnering 500k Myspace views she has amassed a list of accolades including Soultrack’s Best Female Vocalist, Heineken Redstar Soul Artist of the Year, a nomination for Best Underground Artist at the BET J Awards – and was listed on iTunes as Best R&B Underground/Indie Artist and Best R&B Indie Track for the single “It’s Over” off her 2008 album Still. Popmatters has referenced Conya’s “pleading and yearning” vocal style to Lauryn Hill, while Soulbounce hails her in line for the queendom of indie soul.

Now for 2012 the poised songstress offers up her gritty yet melodic sound on the debut single “Don’t Change” off of her forthcoming LP, A Pocketful of Purpose. She reveals a modern spin on vintage sound, seamlessly infusing her music with an eclectic blend of soul, blues, rock, jazz, and R&B. Doss has built a solid reputation over the years as the modern benchmark for indie female soul, and her forthcoming LP is a testament to that. Commenting on being labeled a Neo-Soul artist, Doss quips back, “If they want to label me in the Neo-Soul movement they can, but to me this soul music is nothing new.”

With beauty, grace, and confidence, Conya Doss has composed an 11-song compilation with A Pocketful of Purpose. The skillful arrangement of horns, strings, and piano riffs suit her finely crafted lyrics about love, life and pursuing your dreams. “Don’t Change” is a smooth, mid-tempo flow that syndicated radio host Michael Baisden has already deemed an “instant classic.” The simple yet highly effective “Just Me” finds the songbird’s breezy voice twisting through candid sentiments of a young woman who is comfortable in her own skin, while “Where Do We Go From Here” provides imaginative songwriting with an engagingly conversational feel over a Conga-influence d beat. Renowned producers Frank McComb, Myron Davis, and Rodney Jones serve as the main conductors on the album along with newcomer Dre King.

With a refreshingly crisp and remarkable vocal range, as well as sparse yet beautiful instrumentation, Conya Doss has found success in simplicity. A Pocketful of Purpose continues in Doss’ brilliant delivery of sweet, supple and heartfelt lyrics but she plunges deep into a bluesy-jazz vibe with spiritual undertones reminiscent of a 70’s sound in both harmony and mood. The music carries a laid-back, earthy quality that features various moments; from truly moving and haunting to a rootsy reflection of where the singer has come from with messages steeped in love, risk-taking, rejection and heartbreak. Her music is not lost among the pantheon of new crooners, but instead invokes the spirits of legendary composers-singers such as Chaka Khan, Betty Wright, Natalie Cole, Me’shell N’Degeocello and Alanis Morisette.

Inspired by Bonnie Raitt, Ani DiFranco, Mint Condition, Rude Boys, Jane Child, Donnie Hathaway, Angela Winbush and Nina Simone, Doss attended Cleveland’s famed School of the Arts at the same time as R&B crooner Avant. She possesses an indistinguishable reverence to the soul divas of yesteryears by encompassing invigorating vocals with thought-induced messages that silhouette charismatic, rhythmically charged production that simultaneously blazes a trail for her brand of melodic soul. She is just as comfortable with lascivious R&B wails as she is with gospel-themed fare. In a time when many pop stars have become further and further removed from the folks that they speak to with their custom made looks and unattainable lifestyles, Conya remains a lot like us: a tender, tough, self-possessed young lady who puts her community before commercial concerns.