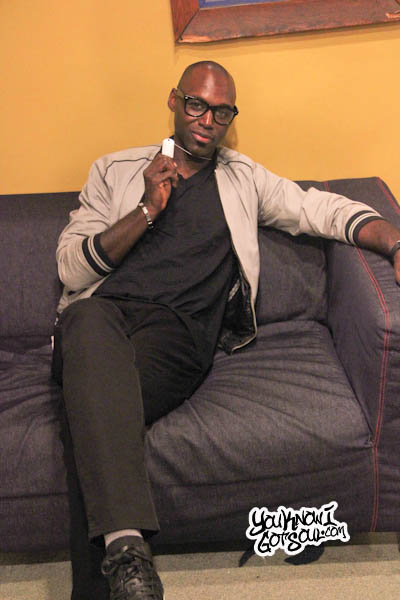 Brian Owens is an artist we first introduced you to a few months ago; a new age soul singer originating in a military band. Now that his debut album “Moods and Messages” has released, we wanted to catch up with him again and did so this time prior to his performance at Sol Village at SOB’s. We discussed with him how the album has been received, the audience he’s been reaching, the biggest challenge of being independent, healing people with his music, and much more.

YouKnowIGotSoul: You’re here at Sol Village at SOBs here in NYC. What’s it feel like to be able to perform here in New York City?

Brian Owens: I’m excited. It’s my first time performing at a venue like this in New York City. The band sounds amazing, they took my tunes and really made them come to life. I’m looking forward to having a really fun musical experience tonight.

YouKnowIGotSoul: Your debut album “Moods and Messages” came out last month. How’s it been received so far?

Brian Owens: “Moods and Messages” is actually doing really well. Digital sales are really well, physical sales are doing well. People are responding very positively to the record. I think that it’s good to see that people are still hungry for and still looking for good, pure music. Specifically when it comes to traditional soul, it’s such a blessing to see people leave positive comments and really show support. I’m excited about that.

YouKnowIGotSoul: The thing that strikes me about you is you’re a younger guy but have an old soul. What types of audiences have you been reaching?

Brian Owens: Anybody who likes good music. Anybody who likes old school music. Anybody who’s looking for good music or music that’s based in an actual experience and not in glitz and glamor. Anybody who loves music that has substance and albums that have real instruments on it. The audience doesn’t have a specific gender or race or age or demographic. I think it just comes down to music is real music and it speaks to real people. If you’re one of those people, I think it’s just good to have it available for folks.

YouKnowIGotSoul: Your second single “I Just Wanna Feel Alright” is out now. Talk about the creation of the song.

Brian Owens: It actually came from a really low point in my life. I think I wrote the song, like much of this album, out of necessity of the moment. I wasn’t looking to write a song, I was looking for an answer to what I was going through at the time. It brought out that song and good lord, every time I perform it, there’s an epic quality to it because of the intensity of the emotions in the tune and the fact that there is a resolution in it. It’s one of those kind of inwardly realized things. I love the song, I love performing the song, my prayer is that when people hear it, it can help them in the same way that it helped me.

YouKnowIGotSoul: As an independent artist, what’s the biggest challenge in getting heard and getting your music out there?

Brian Owens: I think the biggest challenge as an independent artist can sometimes be getting the resources necessary to compete in a wider market. I also think that if you have good music and you get it out to people, I think it will take care of itself. I think there are enough people out there and with the internet and with social media, there’s so many different ways for artists to share their music with people. The truth is, not everybody has to be a millionaire and sell platinum. If you have good music and you just want to share it with people, then you should share it with people even if you only sell five copies and you play at a coffee shop on the corner. If you’re really care about the music and music helping people, then that’s what it’s about at the end of the day. So if you make one song that helps one person, for me that’s the gist of this album. If the album helps one person deal with something, then I can’t in any way say it was a failure because it may not achieve commercial success. You always hope for commercial success, but for me as an independent artist, that was never my drive and motivation behind any record. It was to express and share with people. I think all of those positives trumps any negative to being an independent artist. I think being an independent artist is the best thing in the world because of that word right before artist, independent. You have the control to share your creative vision and share what you want to share with people. I think that’s really important.

YouKnowIGotSoul: I love that outlook and that enthusiasm for being independent. That means the music is pure, and that’s the best kind of music.

YouKnowIGotSoul: Coming from the armed forces and being in a military band, do you feel like people are drawn to your story and it makes you more appealing?

Brian Owens: I think so. I think that any time you have somebody that has a military background, because so few people really serve in the military, but everybody knows somebody or has a family member. So few people do it, but everybody knows somebody that has served. It’s such an honor to be able to wear a uniform and I got to wear the uniform and do music. I think that those two things along with other parts of the story just kinda makes it a compelling story which is good. Anything that can shine a light on my brothers and sisters who wear a uniform is a blessing.

YouKnowIGotSoul: I’ve read quotes from you saying your music is a mix of Sam Cooke, Marvin Gaye, Curtis Mayfield. As r&b music has gotten younger, do you feel like people are missing this kind of music and there’s a void for it?

Brian Owens: Absolutely! I think that the blueprint artists, the foundational cornerstone artists can be easily forgotten as the generations go on and on if the value of what they gave to us isn’t passed down. I think it has to be passed down because it’s the root of just about every form of American music stems from these roots of the black church and these roots of jazz and these roots of grooves. Those artists like Sam Cooke and Otis Redding and Marvin Gaye understood that somewhat. I think for me, because I have similar upbringing and pedigree, that’s what I gravitate to. That’s my thing. I’ve always been like an old school kind of guy. I do think it’s important for younger artists if they want to, because I think there’s a place for all kinds of music. I think it’s very valuable for them to study artists like Sam Cooke and Otis Redding and Marvin Gaye and Curtis Mayfield. Just like I think it’s important for young jazz artists to study Louis Armstrong or Miles Davis or John Coltrane. I think it’s valid as a point to stress that.

Brian Owens: I just want to thank you guys for all of the support you’ve showed me and showing “Moods and Messages” the album support. Definitely follow this journey. We’re on Twitter at @BrianOwensTV and the website is BrianOwens.TV. We just want to keep you up to date on what’s going on with this whole journey. We’re really excited and glad you’re on board with us.