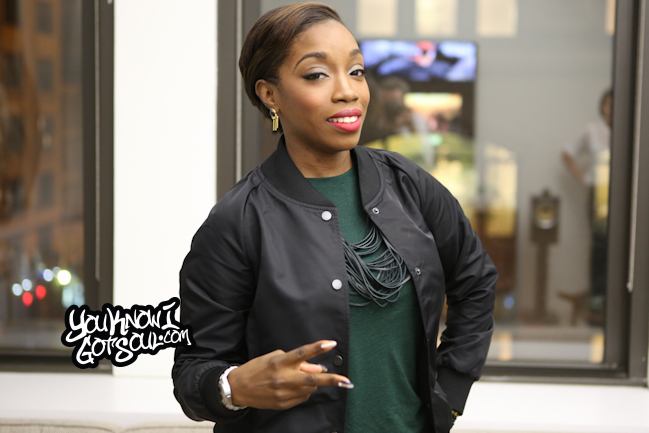 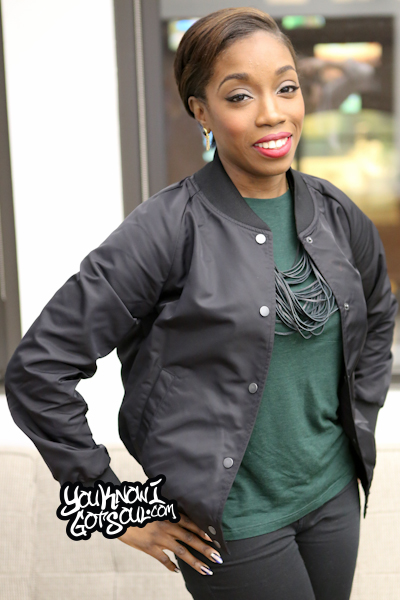 When Estelle released her new album “True Romance”, it marked a milestone in her career since it was the first she put out under her own label. After having much success at major labels over the years, she’ll look to match that now given the creative freedom to truly express herself. “True Romance” is a great first step, an album that really embodies the diversity of sound that defines Estelle as an artist. The album’s current single “Conqueror” is a great inspirational song, and was taken to a new level when she performed it on the hit show “Empire”. YouKnowIGotSoul sat down with Estelle while she was doing promo in NYC and discussed the creation of “True Romance”, how her experience was on “Empire”, plans for building her own label, and much more.

YouKnowIGotSoul: You have these 4 themes that make up the “True Romance” album. Talk about how you developed each of them and how they lead up to the album as a whole?

Estelle: I’m a very eclectic artist. I’m not really good at staying at one genre, so as I started writing the album, the themes popped out more than the music. It was like “What are talking about right here?” and we started forming it. It’s about courage, passion and the BS. And of course the whole album being about true romance. It’s just about finding terms on your level and not bending over. It’s about not being a person that’s living under a bunch of bullshit and then calling it life because you have a bunch of people co-signing it. It’s about being truthful, being yourself and being okay with yourself. All the songs represent that.

YouKnowIGotSoul: What was the inspiration behind these songs? Was it from your personal life?

Estelle: This was the most acute record I’ve ever written. I literally would go through stuff and when I would feel some way, I would just write it down. For the first time, I never let it go for a few months and said said “Man I’m going to think about this”. It was more like “This is how I feel. I’m writing it right now and I’ll put it into a melody and song later”. Most of the records, I was lucky because I was recording while I was going through this stuff. To be able to just go in the studio and write it, that’s how the songs came about.

YouKnowIGotSoul: There was quite a transition from your earlier albums to “All of Me” where you had more up-tempo records. Your first two albums had more samples and Hip Hop influences and it seems like you’re getting back to that with this album.

Estelle: I didn’t even do it on purpose. I think I did a lot of it on “Shine” and I missed it for a period because I just wasn’t there. The production wasn’t there and people weren’t producing songs that sounded like “Silly Girls” or “Time After Time”. They weren’t doing anything bass heavy. Every time somebody sent me a beat, it sounded like “American Boy”. It got boring after awhile, but the feeling and vibe weren’t there. As I started recording this one, our whole motto was just “Nothing wishy washy and nothing maybe”. We wanted records that make you feel something and have an emotion. I realized as we were recording it, there weren’t too many records that I could call on like immediately as being influential. Everything was like “I expected that” and there was nothing that made me lose my mind in my room when no one was watching like how I used to when I was younger. This was my own attempt or version of making people feel this and have people say “Turn that up!”.

YouKnowIGotSoul: What producers did you work with on this album?

Estelle: J.U.S.T.I.C.E. League was one of the producers. We had like 12 hours to knock out 2 tracks. We got started late in the session and Sam Dew wrote “Silly Girls”. He is an amazing songwriter and his voice is brilliant. He just has a unique perspective with words. We sat down and went into recording the song. I hadn’t really told him too much and then we connected because we’re both Capricorns. He hit it out of the park with “Silly Girls”. We did a few takes and harmonies. That session was easy.

YouKnowIGotSoul: You aren’t rapping as much on this project. Was that done by design?

Estelle: No, I never thought about it. There were a couple of rap records but I didn’t like them. At this point in my career, if I’m going to do anything, I have to love it. When I rapped in London, it was because I love it and it was because I did it great. Now I won’t come back and do it again until it’s great. If I don’t think it’s awesome then you’re pretty much going to see it. That was it. It wasn’t on purpose or anything. It was just that I wasn’t there and I didn’t like what I had written.

YouKnowIGotSoul: Talk about your experience being on the TV show “Empire” and how it all came together.

Estelle: When we released “Conqueror” off my album a couple months ago, producers heard it and they were like “We would like you to sing it on the show and we want you to sing it as a character”. I was like “Hell yeah!”. I hadn’t seen the show and I didn’t know it before it aired. I just knew it looked exciting. One of my good friends Jussie Smollett who plays Jamal is on the show. I know Taraji’s level of work and I know Terrence Howard’s. It was sold on the level of talent and also just the idea of it being about the music industry. Some of the story lines I was like “Yeah I’ve seen that happen before!”. Some of them are so real and they use a lot of practical theories and stories. As a musician, I’m going “I’ve been there before” like the label saying things like “Go live your life!”. A lot of people take it as entertainment, but it’s very real. It’s pretty heightened and it’s extremely exaggerated, but it’s real.

YouKnowIGotSoul: You released “True Romance” was on your own label. What has that allowed you to do?

Estelle: I think it was just a growth thing for me even moving to being on my own label. Me and my business partner, we always had this thing that if we weren’t able to help each other, he wouldn’t hold me back. He wouldn’t ever hold me or help me just for the sake of it. He knew that I was already myself and working as an artist with an album out in the UK before we even started working together. He was like “If you want to be here, then you can be here”. My thing was like “If I get 10 years and you still have to help me then I think we failed in our mission”. It kind of hit that 10 year point and I was like “I think I’m alright!”. He was all support and he’s one of the biggest supporters. He always hits me. As soon as he heard “Make Her Say”, he was like “You killed it!”. People always want to hear the hate, but it’s the strangest thing. I’ve been blessed to have good people on my team. It’s family. At this point in my life, as a business person, you should be able to do what you have to do without the help of anyone else if you’ve got a strong enough friend.

YouKnowIGotSoul: Do you have any other artists under you on your new label?

Estelle: I have a couple of producers and songwriters I want to work with and we’re in the middle of talking. I’m crazy as an artist myself and I have my extremes. I have to be a business woman too. I definitely have my moments, so I know how difficult it is to deal with artists. I will at some point, but I’m not ready. *Laughs* I will at some point. Definitely producers and writers that I have and I work with. We’re looking to develop some writers and producers. There will be some.

YouKnowIGotSoul: Your sound is so diverse and you’re able to touch on different genres. Has it ever been a challenge for you to find your lane or what the lane people want you in?

Estelle: Not a challenge. The challenge has been people asking me why I didn’t stay in one genre. I was just finding clever ways to answer that. I simply don’t know how to. When I was born and the way I was raised is that good music is good music. It could be any genre. I don’t know how to do anything else other than good music. I literally get bored. I change my hair every couple of months because I get bored and I feel the same way about music. I can’t just be one type. It’s the creator in me. I feel what’s consistent is my voice and I think my tone is unique. You know the sound of my voice when I sing and I’ll let that be the consistent. That’s all I care about. As long as you know what I’m talking about and you love what I’m singing about, then that’s all that matters.