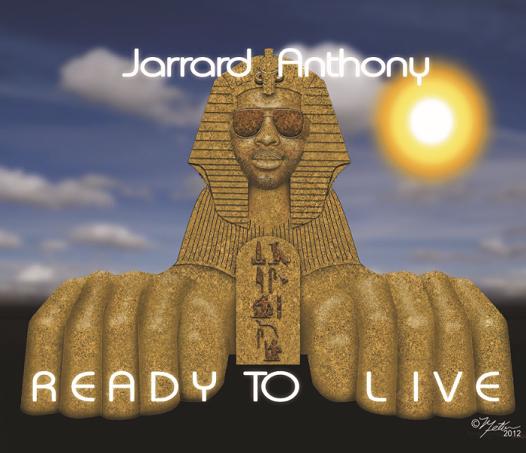 To evolve, elevate, enrich, edify, encourage—these signifying words pepper singer/songwriter/producer and multi-instrumentalist Jarrard Anthony’s conversation whenever he describes his goals as a seeker, teacher, student and artist. Each time the doer presses the curve of a guitar against his body or sits poised behind an ivory row, he is searching, digging to unearth the stories and melodies of a shared humanity and spiritual source. Stated simply, Jarrard Anthony wants to connect, for listeners to experience the exchange of mutual energy, the transfer of love, knowledge, intimacy, and appreciation through music —the lifeblood of Anthony’s own healing brand of soul. A nurturing husband and father, lover, man, brother and son, Anthony uses the multiplicity of his roles and insights to give voice to the varied experiences of men striving, and sometimes failing, to connect to love, to source, to themselves for themselves, their loves and families. His latest full LP, Ready to Live, brings him closer to his goal.

Born and reared in Richmond, VA, Jarrard Anthony was best known as a three-year old Chuck Berry impersonator. Demonstrating an early aptitude for writing songs to video game melodies, Anthony caressed his first keyboard on Christmas Day at age 10. By high school, he’d made a commitment to share his gifts and seriously study his craft, learning from influences as varied as Maurice White of Earth Wind and Fire, Sting, Jodeci, and the bright-voiced Corey Day from Dr. Buzzard’s Original Savannah Band. While still in school, Anthony joined an R&B group, Personal Preference, learning the art of compromise and collaboration that would later inform his writing for artists like Howard Hewitt, Franklin Roberts, Bobby Lyle, Tonia Woods and being sought after for studio work with Levi Little of Blackstreet, Tim Dillinger, CJ Lewis, and producer Joshua Thompson (Babyface, Joe), among others. Refinement in dance, voice, and performance came through 10,000 gladwell hours of group rehearsals, practices, lessons, talent show and local radio showcases, before eventually wowing the Apollo audience in New York, ultimately taking the Amateur night win.

Always growing, always searching, at age 19 Anthony decided to step out on his own as a solo artist, releasing a single “So D-vine” that became a Central Virginia hit. His indie EP debut, The Dream (Thermite/Stonegroove), soon followed as did a #2 spot on the UK charts, holding for several weeks. His gifts continuing to make room for him, Anthony’s early recording success overseas opened the doors for relationships with famed producers Nate Smith, Bob Baldwin, Nolan Doran, and Joe McMinn, who worked for two years with Anthony on the 2004 full-length release of the critically acclaimed Don’t Sleep…Just Dream. An international “Don’t Sleep…Just Dream” tour followed, taking Anthony on stages around the globe and subsequently turning down financially dubious major label deals, earning the moniker, “Mr. Independent.” Over the next five years, Mr. Independent would launch a label, JAP Music Entertainment Group, land a major distribution deal with Bungalo/Universal, be featured in numerous magazines (VIBE, Black Beat, Blues & Soul), and share stages with artists like Silk, Monica, Cam’ron, Amerie, The O’Jays, L.L. Cool J, Howard Hewitt, Lyfe Jennings, Anthony Hamilton, The Gap Band and Pieces of A Dream, among others—artists as varied in their musical genres and storytelling approach as Anthony was becoming in his own. Genre-hopping and hybrid-blending jazz, classic soul, urban R&B, electro- and acoustic soul, the 2005 Urban Independent Music Awards nominated Anthony released an intimacy project in 2006, S.ynergistic E.nergy X.change (The Movement), the 2008 acoustic Diary of a Messenger EP, and concluded an 11-year run with a 2009 Decade of Dreams compilation, garnering a minor radio hit with “Damn Sista” and a 2009 SoulTracks Readers’ Choice Awards nomination for Male Vocalist of the Year. Capping the year with the success of what essentially served as a greatest hits project, Jarrard Anthony retired from the industry on a high note to focus on family, marriage, and spiritual development, to grow in yet even newer directions.

Still, life is a circle and restoration has a way of bearing fruit. Over the next two years, the undeniable endowment of his sun in songs like “Lucky Day” relentlessly shadowed his footsteps; the sultry “Healer” and “Blowing On Ur Back” wrapped themselves in his bed sheets, illustrating his dreams; the tickle of testimony pressed him to proclaim the safety and the warmth discovered in every one of his wife’s “Galaxy” centering embraces; and, the nagging urge to reveal the quiet lessons he learned by slowing down and becoming “Invisible” again only to reemerge renewed–so much begged to be shared. Unable to resist the call to express the glowing energies surrounding his life and love in his season, Anthony begin to put pen to paper, hugging his guitar’s familiar body once more in preparation for new birth.

It wasn’t long before Anthony’s first album’s producer, composer and drummer Nate Smith (Michael Jackson, Teddy Riley), was back behind the boards helping to create the affirming doo wop harmonies of “Something Like Love,” the stepper’s R&B of “Cloud,” and the true-to-life hip hop of “Never See Her Again.” Soon, he was inviting indie star, Darien (SoulPersona, Reel People), to join him in a rare male duet over a bossa nova groove for Anthony’s tropical ode to love, “All Around the World.” Virginia newcomer Patricia Covington and jazz legend Lonnie Liston Smith joined Anthony on the woodwind laden “I Love U,” a flirty mid-tempo duet that pays homage to Weldon Irvin and the driving soul of Anthony’s youth. Together Smith and Anthony travel over a wide terrain of stories and layered musical genres—from house to jazz to ‘70s soul—without ever losing the relaxed, smooth soul vibe that has personified the Jarrard Anthony sound. The result is an infectious joy infusing every song; its harmoniousness reflecting the peace and balance Anthony’s finally achieved in his spirit, life, and love.

With the NIA/Purpose Music Group distributed Ready to Live, Jarrard Anthony, lyrically and musically demonstrates a marked evolution from a carnal, young R&B lothario to the growing man who: exalts women in truthful, uncalculated ways; affirms the interiors of quiet men; voices the teaching chaos preceding the order of enduring relationships, and humbly encourages the principles of a balanced life without ever deigning to preach, rather to teach. Speaking life and opening heart chakras with every soothing, edifying sound, Anthony reveals in Ready to Live the possibilities of connection and the heart of every man who’s ever boldly, vulnerably stepped to love seeking to be better than they were the day before. Better, stronger, and wiser, in Ready to Live, Jarrard Anthony bears the journey of his soul and it sounds oh so good.

Click here to Purchase “Ready to Live” on iTunes.