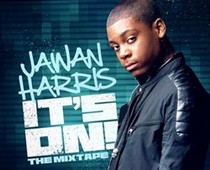 This is from his new mixtape It’s On! which you can dl here: http://www.datpiff.com/Jawan-Harris-Its-On-The-Mixtape.293102.html.

You may remember Jawan from his single “Another Planet” that featured Chris Brown. (http://www.youtube.com/watch?v=kpIr-s3-xi4)! He’s currently on the Life of a Jetsetter Tour with Diggy Simmons and is working on his debut album. Jawan has grown as a singer/performer over the past few years and has gained celebrity fans such as Usher, Chris Brown, J Cole & Miguel.