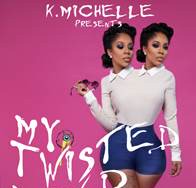 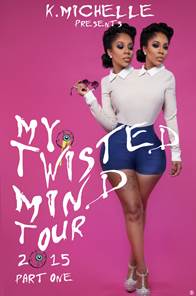 Atlantic recording artist K. Michelle has announced details of her upcoming, headlining tour, dubbed “My Twisted Mind Tour.” The first leg (Part One) kicks off February 5th at San Francisco’s Mezzanine and then travels through the month (see attached itinerary). Additional dates will be unveiled soon – for regularly updated news and information or to purchase tickets, please log on to www.thekmichelle.com/tour.

“My Twisted Mind Tour” celebrates K. Michelle’s blockbuster new album, “ANYBODY WANNA BUY A HEART?,” which made a historic chart debut upon release last month, entering at #6 on the SoundScan/Billboard 200 – the year’s highest charting debut from a female R&B artist. What’s even more exciting, the album – which includes the hit singles, “Love Em All,” “Maybe I Should Call,” and “Something About The Night” – debuted at #2 on Billboard’s “Top R&B/Hip Hop Albums” chart as well as at #1 on the iTunes Store’s “Top R&B/Soul Albums” ranking.

In addition to its immediate success, “ANYBODY WANNA BUY A HEART?” is among last year’s most critically acclaimed releases, named to both Billboard’s “10 Best R&B Albums of 2014” and Rolling Stone’s “20 Best R&B Albums of 2014.” “An excellent album,” declared Complex, adding, “It cannot be denied any longer: K. Michelle is leaps and bounds ahead of many of her peers.”

Additional Dates To Be Announced