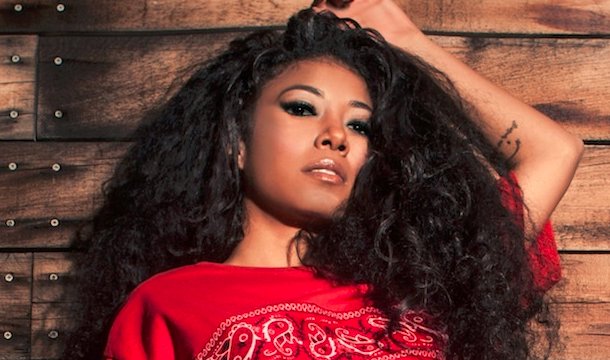 Today, Motown Recording artist, Mila J, premiered the music video for her sizzling new single “Smoke, Drink, Break-Up” across broadcast and digital platforms. As of this morning, the video is currently in rotation on MTV Jams and MTV HITS, MTV2, VH1, available on VEVO and will air during today’s episode of BET’s “106 and Park” at 6:00pm EST.

The video, directed by Blue Gregory, captures the essence of Los Angeles while blending in the story line of the track. “Smoke, Drink, Break-Up,” keeps a dynamic pace as it moves between Mila riding through Los Angeles with her crew in head to toe Black Scale apparel to intimate moments with special guest, Los Angeles’ rising hip hop star, Ty Dolla $ign. Mila’s intricate choreography throughout the video also showcases her keen sense of fashion with a twist. She has an approachable and sophisticated look, yet she still has the throwback tomboy appeal. The chemistry between special guest Ty Dolla $ign and Mila J throughout the video makes it a must see.

“I’m really excited to share my first music video with my fans off my upcoming album M.I.L.A.” says Mila J. “I truly wanted to capture Los Angeles in this video and what better way to do that than with my friend Ty Dolla $ign.” Music video director, Blue Gregory added, “She’s great to work with. Not only can she sing and dance but also brings a special kind of energy to set. I predict a bright future, and can’t wait to work with her again.”

“Smoke, Drink, Break-Up,” is currently rising at radio across the country debuting at #40 this week on the Billboard Urban chart and finishing off the week at #32. Critics agree too as Singersroom claimed the track is “creating quite the buzz” and VIBE recently premiered the teaser for the music video.

This is the first single off Mila J’s debut album M.I.L.A., which stands for “Made In Los Angeles,” and will be released later this year. The Los Angeles raised singer signed to Motown Records in 2013 and has since been in the studio recording her debut album.