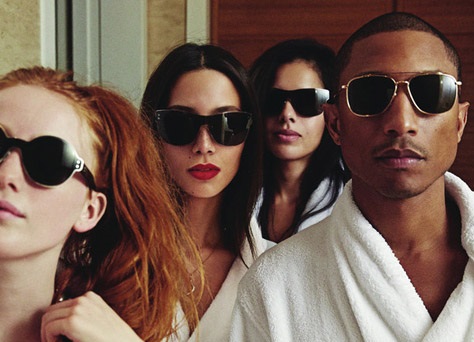 First came ‘Happy’, with its irresistible hook and now world-famous video, then ‘Marilyn Monroe’, with its opulent Hans Zimmer-arranged strings and funk overtones. Now, Pharrell is back with his third single from G  I  R  L – ‘Come Get It Bae’. Pharrell’s long-time friend Miley Cyrus provides some of the backing vocals and makes a cameo appearance in the video.

It’s a tropical, jangling tune that’s already made waves in the USA, and will be released in the UK on August 31st.

Pharrell confirmed his status as one of popular music’s most influential and talented men last year with his smash hit ‘Happy’, which has sold over 1.2 million copies in the UK alone since its release last November and was named as the second most-streamed track this year so far with a gargantuan 23 million streams. It also achieved not one but three stints at Number 1. G  I  R  L, his first solo album since 2006, was released on March 3, 2014 after months of anticipation from the music press all over the world.

NME were left “giddy and breathless”. Heat Magazine called it “infectious from start to finish” while The Sun’s Bizarre column boldly claimed that it was “going straight to the top of the charts”.  MOJO and Time Out both crowned G  I  R  L their Album of the Week upon its release, with the latter labelling it “one of the best pop albums of the year”. But perhaps the biggest accolade comes from the The Times, who called the album “a Thriller for the 21st century”.

The announcement of ‘Come Get It Bae’ as the next single comes hot on the tail of the news that ‘Happy’ has been certified 3x platinum by the BPI. It went to No.1 in the Official Charts in the final week of 2013, and has gone on to spend a further three weeks in the top spot on separate occasions in 2014, not having been out of the top 20 all year.  Happy now ranks at No.4 in the Official Charts top 5 biggest-selling singles of the Millennium.

Colin Barlow, MD, RCA Label Group UK, said:  “Pharrell is one of the most innovative producers, writers, and performers to emerge from the world of music in the last 20 years.  We’re proud to be able to count him amongst such a creative, talented and credible roster of artists at RCA here.”

After wowing crowds at Radio 1’s Big Weekend, T In The Park and Wireless Festival, Pharrell is set to bring his hit-filled show to the UK this October, including dates at London’s O2 Arena and Manchester’s Phones 4u Arena.