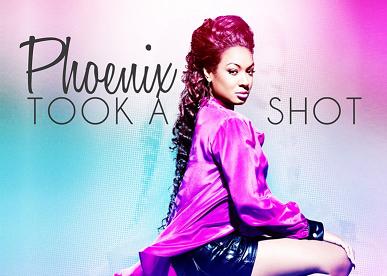 With an unmistakable voice, beauty and ambition to hold her own among the best, R&B songbird, Danielle Marie “Phoenix” Green is pushing the limits of R&B music and the industry is taking notice. Like the legend of the mythical bird, Phoenix has risen above many obstacles and is poised to establish herself as an artist with staying-power with a distinct brand of edginess, that puts her in a lane all her own.

Born in Boston and raised in Dorchester, Mass., Phoenix began singing at the tender age of five, crooning to Michael Jackson and En Vogue songs, and then later singing in the school choir. She attended a performing arts high school in Boston where she studied classical music, opera, and jazz. Determined to break into the industry, Phoenix started appearing on several mix tapes of local rappers, including Aquarius, and working on some music of her own.

It was through a mutual friend that Phoenix met NFL star and Superbowl Champion, Raheem Brock and the two hit it off instantly. She let him hear some of the tracks she had recorded and he quickly became a fan. “At that time, I was trying to figure out what I was going to do with my career and where it was going to go,” recalls Phoenix. When Brock mentioned to her that he was starting an independent imprint label, BeastModez Entertainment, and looking for a female singer, she thought he was asking her to help him find one. But she was the one who Brock had in mind. “So I ended up signing with him because he proved to me that he really wanted to see my career take off,” Phoenix says. “He started linking me up with song writers and producers that he knew in the industry.”

Phoenix immediately went into the studio and began working on her mix-tape, “Concrete Love,” a collection of nine raw, gritty, and brutally honest tracks guaranteed to conjure up interesting conversations. The first single and one of the two original tracks, “Took a Shot” is a mellow track about love getting the best of someone, while the title track, “Concrete Love,” which features underground Boston rapper, Maine, is a sexy street anthem about unapologetically loving a “bad boy”. With Phoenix’s emotionally-fueled voice and songwriters Andrea Martin (who’s worked with Whitney Houston, Michael Jackson, and Mary J. Blige) and Corté Ellis (who’s written for Beyoncé and Jennifer Hudson), DJ Dilemma, as well as Timbaland’s producer, Whiz, contributing their expertise to “Concrete Love,” the mix-tape proves that Phoenix is an undeniable force to be reckoned with. “The songs tell my story and it’s the only way I know how to tell it. Sure, I can do the sweet stuff, but I want to show people who I am,” Phoenix says. “I feel like a lot of men and women will be able to relate, especially men. I’ve been getting a lot of positive feedback from people telling me they love the mix-tape because it’s straight up, in your face, and not sugar coated.”

“Concrete Love” the mix-tape is generating quite a bit of buzz – adding to the excitement Phoenix feels about taking her career to the next level. With her tireless work ethic and drive; she is ready to show the world that she has the capability of being one of the most magnetic artists to emerge in years. “I love being in front of a crowd. I’m not a shy person, I love entertaining, I love seeing the reactions I can get when I open my mouth and sing. It excites me to see how far I can end up,” she says. “I believe in myself and I’m excited to see how the mix-tape is going to open up doors for a lot of other things I want to do.” Some of those things include giving back to the community and mentoring underprivileged girls. “I really want to use my career to be able to help those in need and give back. I look forward to being a role model and somebody that young girls can look up to. I can’t wait.”

Now dividing her time between New York, Philadelphia, Boston, and Miami, Phoenix continues to spend a lot of time writing and recording enough material for a full-length studio album she is determined to eventually put out. She also hopes to someday collaborate with super-producer and rapper Kanye West, Sean Garrett, The Dream, and Rick Ross on that effort.

Her journey has not been easy to say the least, rising above obstacles such as drugs, alcoholism, homelessness and growing up in a broken household – but Phoenix has deftly taken her pain and channeled them into song. “This has all been a blessing. Five years ago I knew I’d be singing, but I didn’t think I’d be signed to NFL star, Raheem Brock’s label or about to release a project like this one. I’ve worked really hard and everything I’ve dreamed of is coming true.” With a focus on breathing new life into the genre of R&B, the 22-year old Boston native is honing her craft and working diligently on a number of projects including her as yet untitled debut album.