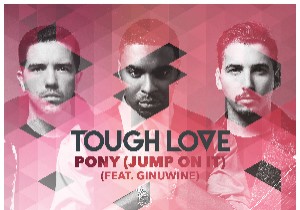 Following the huge response from the released audio, Tough Love are now unleashing their video for their brand new single alongside R&B legend Ginuwine with the remake of the 1996 classic and chart smash ‘Pony’.

The video sees two girls steal Ginuwine’s car and take it for a joyride before handing over to their accomplices (Tough Love). Cue LA skylines, gorgeous girls, car stunts and… Ginuwine dancing.

Alex and Stef from Tough Love say, ‘We wanted a video that wasn’t just fun and sexy but also conveyed the story of how the single came about, metaphorically speaking. We steal Ginuwine’s pony (his car), much like we stole (or politely put) “borrowed” his song. We have fun with the car or rather the girls do, just like we had loads of fun in the making of this record. It’s one of our favourite tracks of all time, so it really was an honour to actually get to work with the man himself. Rock Jacobs (director) nailed this video, his work is exceptional. We were in LA for just under 48 hours but we made the most of it partying our way through and enjoying every moment possible.’

And Ginuwine says, ‘I never imagined I would be able to relive the moment of doing my hit ‘Pony’ again until Tough Love asked me to remake it with them. I was honored to be a part of history once again. It truly allowed me to relive the moment. I finished pony in the studio and said to myself  “damn this is a smash and it’s all yours”, thank you to my brothers Tough Love.’

‘Pony (Jump On It)’ is a one of a kind release, seeing the R&B legend re-record his vocals on this massive classic, it feels as though this could be even bigger than before. It sees Tough Love bring the original firmly into the contemporary dance arena and features fresh, updated vocals from Ginuwine to boot. The track will be released on 7 August.