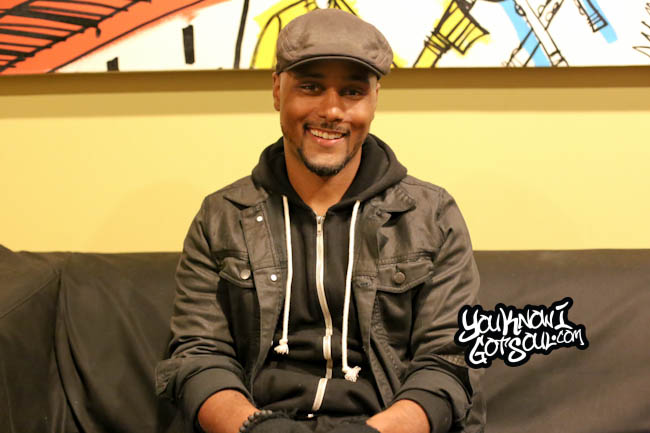 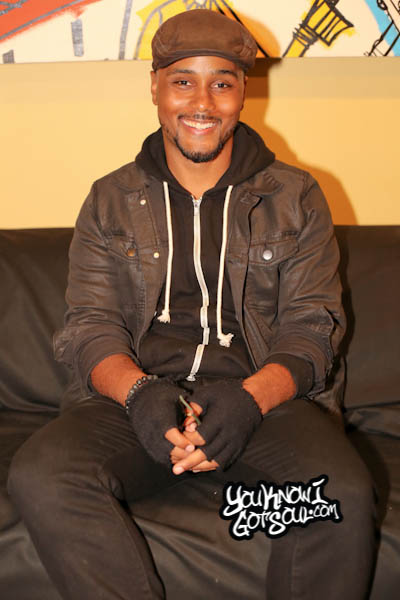 Please allow this interview to serve as a formal introduction to George Tandy Jr. It’s not an exaggeration when we say we haven’t been this excited about an indie soul artist in years. The way his debut single “March” has flown up the Urban A/C radio charts into the top 5 is unprecedented and all indications are we have a star on our hands. It was great to see how fans, labels, media and tastemakers packed out our latest Sol Village show to get a glimpse or George and it goes to show how much his buzz is growing. We sat down with him prior to that show and discussed his origins in music, what his current single “March” means to him, what we can expect on his debut album, and much more.

YouKnowIGotSoul: Your current single “March” is doing big things on the radio and it is really resonating with people. What does that song mean to you?

George Tandy Jr.: “March” for me is a spiritual call to action for the sake of love whether it’s romantic love or self-love. It’s also perseverance over everyday obstacles. I feel like it pulls emotions out of people and it makes me sort of rearrange my perspective when I’m facing obstacles.

YouKnowIGotSoul: The song is Top 5 on Urban AC which is huge for an independent artist. The song has such a positive message and people who hear it for the first time love the song. What are the responses you’re getting from fans who are hearing it?

George Tandy Jr.: The interesting thing is that I’ve been performing the song for so long that I’ve always gotten a good response, but what makes me excited is the people that I haven’t performed for and they just hear it and I’m getting e-mails, Facebook messages and Instagram comments. People are sharing their personal stories with me based on the song like “I had to pullover, call my husband, we’re going to renew our vows and play this song!” It’s pretty amazing.

YouKnowIGotSoul: A lot of people hearing you for the first time and want to know who you are. I read that you were doing some open mics in South Florida back in the day. What was it like making a name for yourself there?

George Tandy Jr.: It was fun. It’s scary at first because if you’ve ever been to a spoken word venue, everyone has a very strong and passionate personality. They just get up there and it’s just them with a mic. There’s no music or anything. I was really inspired by that scene because they’re able to use words and they were so dynamic to move the crowd without anything else, so I thought if I could get some of that and attach it to the melodies then I could create something special. They have been nothing but supportive. I got to develop my talent through the spoken word scene.

YouKnowIGotSoul: I also read that you did some touring as a Hip Hop dancer?

George Tandy Jr.: When I moved to Florida, I got introduced to Hip Hop choreography and freestyling. I was taking classes and eventually I developed a good enough talent to start teaching choreography and going on tour. I was on tour with a Dominican artist called Fulinoto. It was fun, I got to see the world.

YouKnowIGotSoul: You call your sound “Soulternative. What does that mean to you?

George Tandy Jr.: My buddy coined that term. I thought it was amazing. We were playing together a lot. I was like “I’m going to borrow that term.” For me, what it means is that when you listen to the music and when I’m creating music, there’s always going to be an element of soul. You’re going to get a piece of my spirit, so that’s the soul part. The alternative part really gives me space to experiment with sounds. Since genre lines are sort of getting a little blurry now, I’m able to reach out and pull from alternative sounds. I like Country music and Classical music. I want to be able to express myself freely with regards to how my songs sound sonically. That’s why I use that term.

YouKnowIGotSoul: Things are developing rapidly for you. You were just on Steve Harvey which was huge for you. As you continue to develop your fan base, what do you want people to feel when they hear a George Tandy song?

George Tandy Jr.: I was talking to a friend of mine yesterday and originally music was used as a form of communication between tribes. Music and sound were used as warnings and as messages that would carry across distances. People would use sound for that reason. It was to communicate something important and something that would stick to peoples’ lives. If I’m able to always use music that reminds someone of a certain point in their life or is a safe place for people or just an expression of something I really went through. Whether people like it or not, it’s going to be transparent, honest and come from me.

George Tandy Jr.: We’re on this promo tour and we’re performing a lot. I’m dropping my album soon, it’s coming out in a few weeks. I’m really excited about. I can’t stop smiling about it. *Laughs* I’m really excited to meet all the people who have been supporting me by retweeting my video or requesting the song on the radio. I just want to get to start these dialogues based around the music we’ve created and the movement Redstar has created.

YouKnowIGotSoul: Who have you had a chance to work with on this project?

George Tandy Jr.: I was fortunate enough to work with my dad. It was an interesting experience. Music was my connection to my dad when I was growing up, so I always had this idea that since we didn’t live with each other, when I used to listen to his music, I was like “If my dad is anything like this, then I love my dad. If I can create music like this, then maybe I’ll be able to get closer to him.” He actually helped produce the songs on the album and he actually helped produce “March”. It’s a really cool thing.

YouKnowIGotSoul: It’s so rare for a new artist to make such an impact so soon on the Urban AC charts. What’s been the key to having so much success with this single?

George Tandy Jr.: To be honest, that’s RedStar entertainment. We’re a family and I did my job a long time ago when I recorded the song. My job is to record the song, make it the best I can, perform it and sell the song, but the team around me, they’re just beautiful people first of all and to me, they’re geniuses as far as business is concerned because the priority is the relationship with the person that they’re dealing with and the quality of the music. There’s no fluff or other stuff. We’re not out here trying to impress anybody. We’ve been able to be in the right place in the right time and we all have strong faith and put out good positive energy. We do the work and there’s no slacking. I’m very grateful.

George Tandy Jr.: I just want everyone to follow me on @TeamTandy and my website is http://www.georgetandy.com