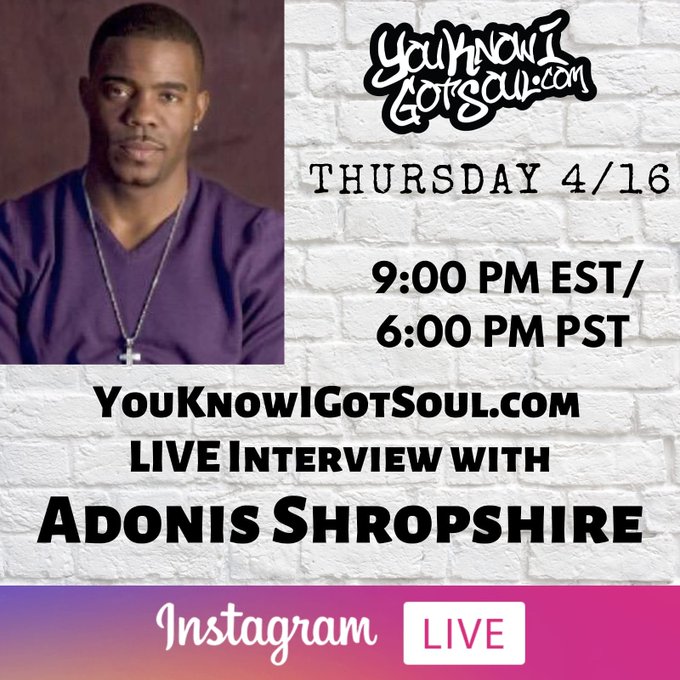 We recently caught up with Grammy award winning producer/songwriter Adonis Shropshire for an interview on Instagram Live. During our conversation, we discussed how he entered the industry and his early days at Bad Boy. Then we we got into his work with Ciara (“And I”) and Chris Brown (“Say Goodbye”). Adonis also shares the creation of “I Need A Girl” by Puff Daddy and his thoughts after both parts became number one hits.

Give us your first experience working with Diddy on the Jennifer Lopez “Walking on Sunshine”.

Adonis Shopshire: Puff doesn’t believe in handouts. When I first got into the studio, we were in his office and he put this beat on. He asked if I could write to it for a girl. I wrote the song and I got maybe the first verse and the hook out. 15 minutes later, he came back and was like “Let me hear what you got”. He stopped me and was like “That was trash. Write it again”. He told me to write it out again and on his way out, he said “I know you’re not used to that, but I can’t treat you no different than I treat everybody else. Write that shit again”. I realized this was my opportunity and I was messing it up. I realized I wasn’t stepping up to the plate. He came back in 15 minutes and I had the entire song done. He was just staring at me and then he called Jennifer Lopez into the the room. I sang it to her and she liked it. Puff asked if I knew how to use pro tools and I said yes, but I actually didn’t. He was like “You’re recording that on her tonight”. The engineer helped me set everything up and that was my first Bad Boy experience. Corey Rooney was always her vocal producer, but on this particular day, Puff wanted to see what he had with me.

YouKnowIGotSoul: Take me through the origins of “I Need A Girl” part 1 and 2.

Adonis Shopshire: Mario Winans was doing his album and he didn’t have a first single. He was trying to make a single. He had “I Need A Girl (Part 1)” in the studio and we did that joint with all the adlibs. We got the record done and presented it to Puff. He was like “This joint is crazy! I got to get on this joint”. Mario was like “Cool! Hop on it”. I don’t know how it turned from Puff hopping on it to it being his record, but that’s the end of that. *Laughs* After Puff recorded it, Usher happened to be in New York and went to record the song. Mario was like “This isn’t my record no more. I’ll make another one”. Mario went to another room and created “I Need A Girl (Part 2)”. I started singing the chorus and Puff came in to hear that joint. The way we used to create, Puff used to approve everything. After recording part one, he came into our room and was like “I gotta get on this joint!”. He hopped on this one, took it and put Ginuwine on it. Fortunately for Mario, he was able to stay on the record. Obviously Mario had “I Don’t Wanna Know” and all was right in the universe. We did those records an hour behind each other.

YouKnowIGotSoul: Talk about the creation of Ciara’s “And I”.

YouKnowIGotSoul: Talk about the work you did with Chris Brown early on.

Adonis Shopshire: Tina Davis brought Chris to us before he had a deal. She was like “I’m thinking about getting this kid signed” and we did four records on him in two days. We did four records with him in two days. “Say Goodbye” was one of those four. They actually took all four and they ended up being on Chris Brown’s album. We had “Winner” and “One Mo’ Gin” as well. Chris was super comfortable with us, so we ended up doing a lot more records with him. We did “This Christmas” with him as well. It really ended up being a great marriage.

YouKnowIGotSoul: “Diagnosed With Love” is a great unreleased Chris Brown song. That should have been on the second album.

Adonis Shopshire: That was crazy. Tank had done a record and they were like “This is the only record we have for the album”. I was like “Cool!” and we went in two weeks and we had a whole album done. We literally did an entire album. Some records came out, but some you didn’t get to hear. We did a lot of records with Chris during that time. We had fun in LA.