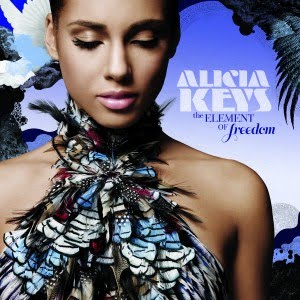 It’s pretty evident that right from the start upon her debut in 2001, Alicia Keys has been a star. From her first album “Songs in A Minor” which sold 12 million copies worldwide, to collaborations on other artists projects, to starring in movies, to charitable causes; it would be easy to define her career to this point as “perfection.” In fact, she has achieved so much success for so many years that it’s nearly impossible to pinpoint something she attempted to succeed at and failed.

If played in procession starting with her debut, each of Alicia Keys’ three albums are the epitome of growth. She has simply stayed true to her roots of powerful vocals over piano fueled rhythms while touching on deeper subject matter on each album. At this point, it is not a stretch to consider her the top female vocalist in r&b this side of Mary J. Blige. For those reasons, I expected nothing but further perfection on “The Element of Freedom.”

Unfortunately, I quickly found the album did not live up to my expectations, and the lead single “Doesn’t Mean Anything” is a perfect indication. It’s not a bad song by any stretch; the problem is it’s just not amazing. This makes me wonder if it’s even fair to judge Alicia Keys on the same scale as other r&b artists. Since she is such a talented artist, an average song from her is still better than 75% of other music we are hearing right now.

On the other hand, this album is just not what we’ve come to expect from Alicia Keys, something is definitely missing. Take the collaboration with Beyonce on “Put it in a Love Song.” Not even this partnership with the biggest superstar in music could save her from mediocrity. Sure the song is fun and catchy, but with two names like this, I was expecting a potential song of the year. The same could be said for her sequel to “Empire State of Mind.” Although she puts a nice solo touch of her own on the song, it’s far from a bona fide New York anthem.

The problem here is not that she strayed from her roots, because the album is filled with her signature piano, powerful vocals and passionate lyrics. Take for example songs like “That’s How Strong My Love Is” and “Distance and Time.” Alicia is still singing her heart out, yet these songs fall short of being anything better than average. The same could be said for “Unthinkable.” I can understand the message she’s trying to deliver through her lyrics, but musically it doesn’t have the effectiveness that makes me want to continue listening to it.

Fortunately, the album does contain a couple of gems. “Try Sleeping with a Broken Heart” stands out above the rest and it’s ironic for the fact it barely contains any use of the piano. Not only is this power anthem one many will relate to at some point in a relationship, but her delivery on the song is excellent. On “Love is Blind,” although she seems to switch up her voice to add effect, it only adds to the song. This is an example of something fresh and new from her I’d liked to have heard more of.

It’s not that this is an awful album by any means. It’s more a case of me as a listener expecting perfection out of Alicia Keys on every effort and only getting a mediocre performance on “The Element of Freedom.” As I mentioned, getting average r&b from her is still getting very good music. However, with the standards I hold Ms. Keys to as one of the top artists in all of r&b, I do expect a bit more from her.