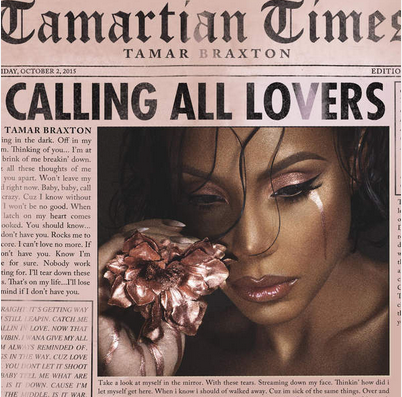 Thirteen years after the release of her debut album, Tamar Braxton came back in a major way with her sophomore record “Love and War”. The CD debuted at number two on the Billboard 200 and it let everyone know that Tamar was here to stay for the long haul. It was truly a coming out party for her. No longer was she considered the underdog, she was the star and the spotlight was all hers. Backed by the Grammy nominated single “Love and War”, R&B fans fell in love with a voice that they knew about, but didn’t get enough of. However that was two years ago and her Tamartians have been anxiously waiting for the new album “Calling All Lovers”. Luckily for them, it was well worth the wait.

The album starts out with the reggae influenced song “Angels & Demons” before going into the new single “Catfish”. The Polow Da Don produced song samples Biz Markie’s “Nobody Beats The Biz” which is probably one of the most sampled songs of all time at this point, but Tamar really does her thing on this song. The smooth production really works with her vocals and the “Don’t Flex” line is ridiculously catchy. Just like her last album though, the sample heavy records are few and far between. We wanted more records like “The One” on the last project and we would have loved more records like “Catfish”.

Ballads and mid-tempos overtake the rest of the album. Tamar’s on-screen personality may be over the top at times, but no one would know that by listening to her music. She’s strictly singing with no gimmicks on songs like “Broken Record” and “Circles”. The gospel influenced “Simple Things” is the closest we get to her colorful personality. Her monologue at the end of the song is hilarious and it is the ultimate Tamar moment.

The album does its part in showcasing her versatility as a singer as she’s belting away on her current single “If I Don’t Have You” and harmonizing with herself on the DJ Camper produced “Raise The Bar”. The latter record really makes you realize how seasoned Tamar is as a vocalist. Whereas some other artists would struggle with a song like that, she perfects it with her haunting background vocals.

Most of the songs on here have a 90’s influenced to it and she does well with the sound. The disco influenced “Must Be Good To You” is the absolute standout on this album. This song needs to be a single right away. The album closes out with “Coming Home” which is another ballad that showcases her beautiful voice.

“Calling All Lovers” is a solid piece of work and Tamar should be proud of this project. You can tell what she was trying to do with this album and she was able to accomplish that for the most part. The only complaint that we have is the heavy amount of ballads on the CD and the questionable tracklist sequencing. For some reason, someone from her team thought it was a good idea to put all the ballads right next to each other. At times it was difficult to differentiate one song from another because they sounded very similar production-wise. The inclusion of more up-tempo records like “Catfish” would have balanced out the album and made the listening experience more enjoyable.

So the question remains – is this a better album than “Love and War”? We would say yes. Tamar wisely strayed away from the ratchet records (aside from S.O.N.) that she decided for whatever reason to include on her last album. She stuck to her strengths as a vocalist and because of that, she’s solidified her spot as one of the top R&B singers out right now.