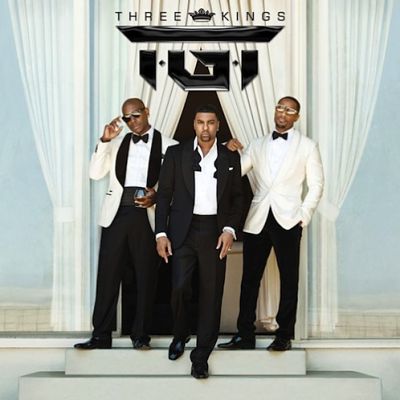 And not for the reason most of you ladies have anticipated it.

Male R&B groups, which were a staple on radio playlists a couple of decades ago, have become an endangered species. Combining the talents of Tyrese, Ginuwine and Tank – veteran artists with a combined 17 solo albums – could be the spark the genre needs.

It could be just the spark the trio needs, too. While all three have consistently released solid work since the late ‘90s, the spark that first ignited their success has been quieted in recent years. These days, acting, fatherhood and production tend to define Ty, G and Tank. Three Kings, the supergroup’s first venture together, looks to once again make them household names.

The album’s most prominent success? These guys sound exquisite together.

Maybe it’s because of the friendship they had before forming the group but vocally TGT are a well-oiled machine. Their harmonies play off each other perfectly as they explore familiar territory – love (“Lessons In Love”), regret (“Next Time Around”), apologies (“I Need”) and rebirth (“Tearing It Down”).

And oh yeah. Sex. Lots of that.

First single “Sex Never Felt Better” is tailor-made for TGT. Despite their contrasting pitches, the trio has no problem uniting in their seductive quests. TGT scales back their vocals expertly on “Explode” to emphasize the sexuality. “Weekend Love” follow that same pattern while “Take It Wrong” amps up the tempo. It’s a great blend of R&B infused with slight elements of hip hop – enough to provide energy but not enough to overtake the track.

Unfortunately, not all of Three Kings is filled with such wise choices. TGT are veterans of the game and, because of that, are speaking to a slightly more mature audience that the typical 106 & Park fan. Well, sometimes, it seems they forgot that. “No Fun” repurposes Snoop Doggy Lion’s “Ain’t No Fun (If The Homies Can’t Have None).” I have no desire to hear anyone singing about passing around a girl to their friends, especially not mature adults. It doesn’t help that guest rapper Problem brags that the girl’s vagina tastes like Thai wings.

“FYH” sounds amazing, with Ginuwine especially turning heads. But once the guys starts telling their girl that they want to “f*** you heavy” things get, well, heavy-handed. Same goes for the unnecessary auto-tune on “OMG.”

TGT sounds so much more comfortable on tracks like “Burn Out.” It’s sensual without delving into immaturity.

At 17 tracks, Three Kings is a mixed bag. Some of the great tracks are lost among those with hackneyed lyrics, causing the album to drag near the end. But you can’t question TGT’s passion. That spark has been ignited. Hopefully TGT’s next outing will keep the fire burning.