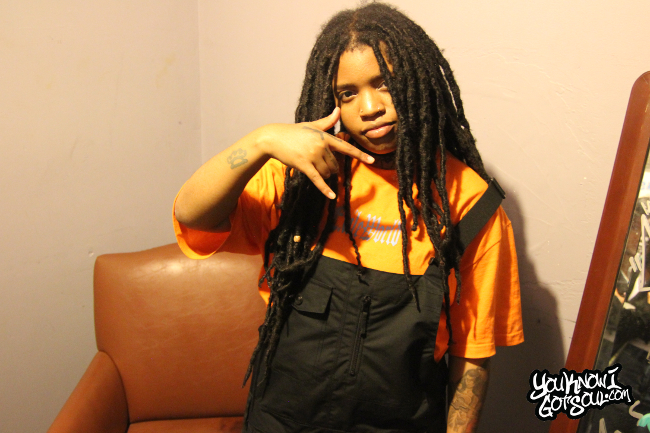 YouKnowIGotSoul had a chance to interview emerging R&B artist Ambré backstage at Lucky Daye’s “Painted” tour. She recently dropped her new single “fubu” which has gained some traction on social media. People may recognize her name as she’s closely linked with Kehlani and she also built a following through SoundCloud with her “Wanderlust” mixtape which came out back in 2015. We spoke to the New Orleans singer about her single “fubu”, her upcoming “EP” as well work behind the scenes with H.E.R.

YouKnowIGotSoul: What R&B albums influenced you growing up?

YouKnowIGotSoul: What did you like about the “Full Moon” album?

Ambré: Just vocally Brandy is just crazy. Her sound just attracted me for some reason and I just wanted to copy everything she was doing. *Laughs*

YouKnowIGotSoul: You dropped your new single “fubu” and the vibe is crazy. Talk about that song a little bit.

Ambré: My homie Ryan Hemsworth sent me the beat for that because initially it was going to be for his album, so I just went into the studio and freestyled most of it honestly and then added backgrounds. I can’t even explain how I made it, I don’t think it was me. I think it was a higher being that just gives me ideas sometimes because it just comes out of nowhere, but that song is a good time.

YouKnowIGotSoul: of course you’re set to drop your new EP “Pulp”. What’s the meaning behind the title?

Ambré: The meaning behind the title is just about youth, fulfillment and things that are your center and core of who you are. Basically I made a whole storyline for a short film that I was going to do and it’s about these high school students. They went on a road trip and found these hallucinogenic oranges. They ate the pulp and they were tripping. Basically it’s about going out on your own personal journey and figuring life out.

YouKnowIGotSoul: Talk about your sound a little bit. You touch on a lot of different sounds, so how would you describe it?

Ambré: I would describe my sound as psychedelic. I just do like what I like to hear at the time. I think I’m always growing and evolving and I want to do that. I try to show that in my music.

YouKnowIGotSoul: Take me through your creative proces.

YouKnowIGotSoul: Your music is base in Soul but you touch on so many different sounds. I know you’re from New Orleans, would you say that has anything to do with it? I know it’s very musical there.

Ambré: I think so, it’s the birth place of Jazz. It’s such a musical place. You’ll go to sleep and hear people outside playing music. Musical is just ingrained in the city, so I definitely think that’s part of it. It’s a party all day there.

YouKnowIGotSoul: You’ve also co-write with H.E.R. on her self-titled project including the song “U”. How did that all come together for you?

Ambré: One of the producers that was working with her found my page on Instagram when I was 17 and he was like “I’m working with this artist, I think you should come out”. They flew me out to New York and we just started working. We hit it off, so we just kept working.

YouKnowIGotSoul: Of course you started out on SoundCloud and put out mixtapes after. I know a lot of people do that, but how did you separate yourself from the masses?

Ambré: I’m still working I think! *Laughs* A lot of it was just organic support from my friends and people who genuinely liked the music and was like “I’m going to share this!”. I’m really appreciated of that.

YouKnowIGotSoul: Did you have any goals initially when you first started?

Ambré: I did! When I was in ninth grade, I made a little flashcard like my five year plan for my music career. It’s funny, I looked at it the other day. It was some random stuff, but I started checking it off.

YouKnowIGotSoul: Talk about your connection with Kehlani because I know you guys have toured together and worked with each other too.

Ambré: That’s one of my best friends. We met in 2014 and she took me on tour with her just off the strength of her fucking with my music. We just became close and I talk to her everyday. That’s one of my food friends.

YouKnowIGotSoul: Are you still writing for other people?

Ambré: I’m focused on me, but I’m always down to create and collaborate with people. The focus was always on me creating my own sound and vision, but just every now and then I’ll hop into someone’s section and hijack it.

Ambré: I love music. I love making art and I love telling stories. I want people to listen to what I’m saying and get into it. Don’t just listen to it, get into it.