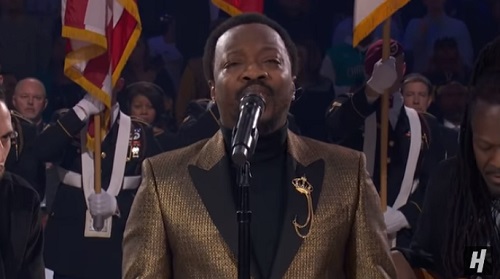 A few weeks ago it was announced that veteran singer Anthony Hamilton would be singing the National Anthem in his hometown of Charlotte for the 2019 NBA All Star Game. The game took place last night, and you can check out hometown hero Anthony Hamilton’s stirring rendition of the song.

The way he masterfully puts his own acoustic spin on the Star Spangled Banner has already caused many to compare to the impact Marvin Gaye had when he sang the anthem at the All Star Game many years ago.

Additional performances during the game were from J. Cole at halftime, Meek Mill during player introductions, and Carly Rae Jepsen singing the Canadian National Anthem.

Charlotte’s own Hamilton will release his ninth full-length studio album this year. This will be his first album since “What I’m Feelin” nearly three years ago in 2016.

Most recently, Hamilton joined Omari Hardwick on his single “hOme”. He also used his voice to speak out with the powerful single “Love Conquers All”.