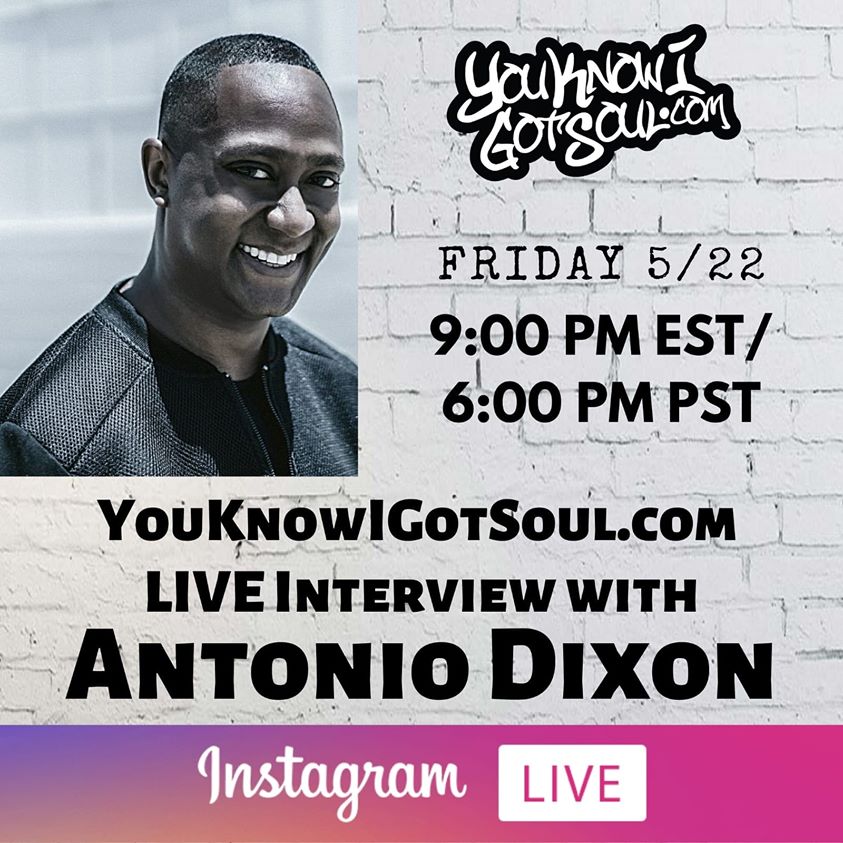 We recently had an opportunity to interview GRAMMY award winning songwriter/producer Antonio Dixon. During our conversation, we talked with him about his early beginnings with The Underdogs as well as some of the hits he penned including “O” by Omarion and “Naked” by Marques Houston. We also touch on his partnership with Babyface which has led to placements for Beyonce and Ariana Grande. Lastly we talk about his work on Toni Braxton’s upcoming album.

YouKnowIGotSoul: You were part of The Underdogs production team with people like Harvey Mason Jr, Damon Thomas, Tank, Eric Dawkins and Steve Russell. What were those studio sessions like?

Antonio Dixon: We had so much fun. It was unreal. We would spend a lot of time just talking and hanging out. I equate it to almost being on a basketball team. Everybody knew their role and they were comfortable with it. As far as my role, I feel like I was the multi-purpose person. I could play and arrange and I was comfortable enough to give arrangements. Tank is a beast and he would do a little bit of everything too. Any of us could spark an idea and we would look at each person’s idea and build it from there. It literally started to become an assembly line. For example, Tank and I wrote “O” for Omarion and it could be Harvey cutting the vocals on Omarion while Tank and I are in the other room writing another record for him ready to go.

YouKnowIGotSoul: Talk about the creative process for “O” by Omarion.

Antonio Dixon: The concept came from Tank actually. It was the GRAMMY night so we were watching the TV and we were trying to figure out an anthem for Omarion. He gave me the concept and I was like “Let’s do it!”. We came up with some stuff together and we demoed it that night. We also wrote “I’m Tryna” that same night. We wrote it and I think the next day or two, we played it for the rest of the guys. Everybody else was on board and loved it. I remember a few days later, Omarion cut it and the rest is history.

YouKnowIGotSoul: You guys also did “Naked” by Marques Houston. Take me to that song.

Antonio Dixon: Very similar process actually. I personally feel like Tank should have kept “Naked” for himself because his version is incredible. Our goal was to build a relationship with the artist and see what they had and what they were missing. We would take all of that information and you just file it. We would go through concepts in our heads and that was our process. We would talk our way into a song.

YouKnowIGotSoul: What’s your approach when it comes to working with artists on multiple albums like you’ve done with Toni Braxton?

Antonio Dixon: Artists should grow and evolve. Giving them version 2.0 never works. With Toni Braxton, when we did the last album and the record “Long As I Live”, she was telling me how she wanted to do something that was grown and sexy. She wanted something that was more mature and they aren’t going all up in the club. For me, it was just doing something for the steppers. That’s where that song came from. I just anted to create something that was mellow and had a little bit of feeling to it. We knew what the chorus was going to be based on what I was playing. We wrote that song fairly quickly. We did it in about 30 minutes and she recorded it. When you’re working on the next project with the artist, the goal is to make them grow and evolve. You have to give them something a little more exciting. It could be their first project where they’re in love or one where they’re in a bad relationship. One of the things that works for me is when an artist starts working with another producer, what I try to do is fill in what’s missing. I’m not interested in beating a record. I try to be a big fan of whoever they work with. I say things like “Maybe you’re missing that soft ballad”. I try to fill in the blanks and that’s my approach when it comes to the writing.

YouKnowIGotSoul: Talk about the work you guys did on Tank’s “Sex, Love & Pain” album.

Antonio Dixon: “Heartbreaker” is one of the only songs that was autobiographical to me personally. I was going through an issue in my relationship and it literally wrote itself. I talked to him about it and we wrote it right on the spot. With the album, we had built a brotherhood with Tank. It wasn’t just about us being in the studio. We went paintballing and had barbecues. We wrote a bunch of songs and he’s so amazing. It was iron sharpening iron. It was one of his best records as well and it’s unfortunate it doesn’t get the exposure it deserves. It was such an amazing time.

YouKnowIGotSoul: When we listen to some of Tank’s new music, it’s a different sound and us as conusmers, we want evolution but we also want it to sound close to what we grew up loving. What’s that balance like for you as a producer?

Antonio Dixon: I think us as producers, we deal with the same struggle sometimes. I believe producers are in the service industry. Our job is to provide what you’re looking for and also provide what the label wants. We have to balance what we love versus what tends to work. Sometimes we have to deal with the fact that people don’t want to hear change but we also know we can’t do what we’ve already done. I think it’s just about writing a great song. Sometimes it’s not about the production, it’s about the songwriting. You can have all the production sounds, but it should be about the song.

YouKnowIGotSoul: Talk about breaking away from The Underdogs and forming The Pentagon with Eric Dawkins in 2009. You guys did some great work like “Words” by Bobby V and “When It Hurts” by Avant.

Antonio Dixon: At that particular time, I just wanted a change. I never wanted to just be labeled as an R&B producer. I’ve done Gospel records as well as Pop songs. I just love music. I wanted to crossover like how Babyface or Jimmy Jam & Terry Lewis did. At that time, I felt like The Underdogs needed to evolve and I just wanted to do more. We parted ways and I wanted to do something else. With The Pentagon, we wanted to create some different records. That’s how we approached it. It was different because it wasn’t about what we did with The Underdogs.

YouKnowIGotSoul: You’ve been writing with Babyface over the last few years for the likes of Beyonce and Ariana Grande. How did that partnership begin?

Antonio Dixon: I met Babyface in 2004 during The Underdogs era. We actually did an entire album that still isn’t released. “Can’t Stop Now” was from there as well as “The Loneliness”. But we did an entire album, so from that era, we just built a relationship. I loved his music and fortunately he loved mine. Fast forward, I was working at his studio and he told me he wants to build a partnership with me. I said “Duh!”. We started a company together and more than anything, I wanted to make sure I was a person that added to his work. I didn’t want to be a taker. I wanted to be someone that brought something to the table. Right after we decided on the partnership, the first project we worked on was Beyonce’s “4” album and then Ariana Grande’s debut album.

YouKnowIGotSoul: Talk about what you and Babyface are doing with Toni Braxton right now and of course she just put out the single ‘Do It”.

Antonio Dixon: That was one I did for her. I had the music prepared already. We worked on some ideas in the studio. I sent Toni just the music and she called me right away and she was like “I think I know what the song is going to be about”. She came back into the studio when she came in town and we cut it right away. I’ve worked with Toni since her “Libra” album so I look at her as my big sister. We just try to figure out what she wants to do and we listen to a lot of records. We just catch her in the moment of what she’s loving and try to come up with some things. We’re still in the process of working on that one. The next record coming out is “Dance” which is for those that want to go rollerskating. It has some 70’s disco to it. That’s going to be the next single coming out. I’m finishing up on that project.