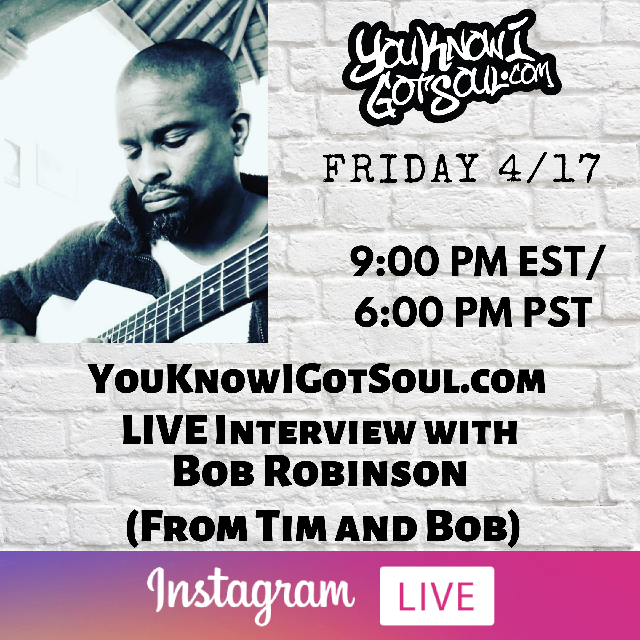 Bob Robinson from the legendary production duo Tim & Bob joined us recently on Instagram Live for an exclusive interview. During our conversation, Case took us through the creation of some of his biggest hits. We also talk to him about his production technique and find out what he’s up to these days.

Bob Robinson: It was around the time when Dallas went through this phase where he wasn’t feeling creative because his best friend got killed. That really messed Dallas up because they were about to be a production team. He would give us all the projects. First we were working with Another Bad Creation and we were working with Wanya on it. That’s how we started with him and we did half of Another bad Creation’s second album. After working with Wanya in Atlanta, he was like “I have to get you to Philly”. We were already in awe working with Wanya because they were the biggest group in the world. We were supposed to only be there for a week but we were there for a month. Dallas like “You guys have to come back to Atlanta!”. It was cool to go up to Philly and really lock in with the guys. They were such cool guys. We had so much fun working on that album. The group ended up flying us to Nevada to work on the album and it was in the middle of the mountains with snow. Guys were riding around on horses and all of these people knew who Boyz II Men was. Tim and I were just two guys from Illinois. For us to work on the biggest group in the world, it was amazing. The creative vibes were just flowing. “50 Candles” was one of the most memorable sessions ever. Afterwards we ended up working in Los Angeles with the group. Tim was like “Nah, we don’t mess with LA. We heard they have earthquakes and stuff”. The group was like “Come on!”. We flew to LA and we spent the day riding around looking at sights. Wayna was just showing us the city. That night, that’s when they had a huge earthquake. Our first night was one of the biggest earthquakes the country had ever seen. It was a crazy experience.

YouKnowIGotSoul: Talk about the work on Monica’s debut “Miss Thang” and the record “With You”.

Bob Robinson: I think that song would be dope to come out right now. The way it sounds with the 808 and that sample. I still don’t know what sample Tim used. Tim was doing something back then that people weren’t doing. He was sampling and putting them in ballads. I don’t think Tim gets enough credit for that because that was the thing that made our songs sound different. It was real innovative. I remember when she cut a lot of those records on the album, she couldn’t be any older than 13. You could hear the maturity in her voice. It was challenging to write for her because there was only so much you could talk about. She sounded like a grown woman. That was an amazing experience.

YouKnowIGotSoul: Your work on the first 112 album was crazy!

Bob Robinson: We went up to New York and did the album. We had a ball. So many memories with that too. It’s funny because when they first decided on “Only You” as the single, Montell Jordan had a song using the same sample. We called Puff like “We have to go with a different single. Montell already used that sample”. Low key we really wanted “Come See Me” to be the first single. Puff was like “It’s definitely going to be the first single now!”. We thought he was crazy but he was right. Puff thrives on that type of stuff.

YouKnowIGotSoul: Take us through the early developments of 112 because they’re all great vocalists.

Bob Robinson: It’s interesting you say that because that’s one of the things we would bump heads with Puff on. They had four leaders which is rare in groups. Each of those guys can actually sing. When we were doing the songs, we tried to balance it. Puff one day was like “Slim has to be the lead singer”. We were like “Huh?” and then Puff was like “No, Slim is the lead singer”. Now I understand it because he was stressing the importance of every group needing to have a lead singer. Puff made an executive decision and that’s how that went. It was still mutually respect between the guys because they were all so talented. That’s one thing 112 doesn’t get enough writing for. Their writing is so underrated. “Cupid” is just one example of it. Even when we weren’t in the studio and we were just working on songs in the house, a lot of getting them to sing in front of people because they were so quiet. They were super introverted like myself. While we were working on their album in New York, they had this girl group called 211 that was just as dope as them. I can’t remember how that fell apart, but 112 was writing all their records. We were just helping them with the production. That was when Bad Boy took over the world. It was very humbling for me because just when we think Puff doesn’t know what he’s talking about, it actually worked.

YouKnowIGotSoul: Take us through the creative process for Sisqo’s “Thong Song”

Bob Robinson: It’s crazy because during that time, we were trying to come up with stuff for Michael Jackson. We were trying to come up with innovative stuff. I heard Tim sampling something and I started thinking of some melodies. When I heard him doing that, I was like “That’s crazy!”. We ended up having a meeting with Sisqo’s manager. “Thong Song” wasn’t even supposed to go to Sisqo. Tim accidentally sent that song to Sisqo. Next thing you know, Sisqo was like “I want to mess with that one” and we were like “That one was for Mike!”. I don’t think anybody on the label was able to see how huge it was going to be. It barely made the album. Of course the song was dope, but it was so different than the rest of the album. Tim was in LA and he was like “We’re in with Sisqo tonight!”. I was in Atlanta so I got there the next morning. There were some things we weren’t on the same page as Sisqo, I’ll be honest, we hated the name “Thong Song”. This is when they were rough on censorship and this is when they first started putting the parental advisory stickers on the CD. Every song we would do, Tim would call his mom first because she was our biggest fan. We took pride in the lyrical content with what we were doing. We were hating on the name. I was like “The melody is dope, but are you sure about the title?”. The track was so dope though. When I got there, they had the hook going and it was dope. One thing I love is that we repeated the same verse over. I think that’s the dopest thing of the song. The label was like “We’re going to put this as a bonus track on the European edition of the album” because it was so different than his other songs. Next thing you know, the DJ’s were forcing “Thong Song” to be the first single and the label had to stop the current single. It was crazy because we just did a documentary on this song. There was a lot of drama that happened with the song. It was this thing where Sisqo would never mention our names when he was winning all those awards. Word of mouth is how we get work. He refused to say our names and we were like “Is this because we didn’t like the title?”. It’s crazy because that song was in litigation for three years because his ideas on the song weren’t his. They were his cousin’s and Sisqo never disclosed that to us. He also didn’t tell us that he didn’t take care of clearing the sample on that record. It was all a learning experience.

YouKnowIGotSoul: Talk about the work you did with Tank back in 2009. Songs like “Lost In You” were bangers, but they never came out. What happened to that project?

Bob Robinson: Those were some of the craziest songs we’d ever done. We were working with Tank on his project on Blackground. We were also working with this white artist on the label named J Lewis. We were in a groove. They had given us the front end money already and we left the studio everyday like “Wow!”. Barry Hankerson shut everything down. Jomo called us and was like “We’re going to shut everything down”. Barry didn’t want to do music anymore. Barry was coming to the studio and loving the records. We were like two months in on their projects and one day he was like “I’m done with the music business”. We thought that Barry just had a bad week and he would call us back. We just went back to work. It was weird. Tank was as surprised as we were. That was crazy, but all of those songs are on YouTube. They’re beautiful songs too. That’s how it goes though. Just Bobby V alone, he could put out an unreleased EP of stuff that didn’t go on his album that we did. People would think he had a new album. You just learn not to be so attached because those songs might not come out. You have to just love the records and move on or else you’ll end up driving yourself crazy. Those Tank songs were special! It was magic in the studio every night working with Tank.

YouKnowIGotSoul: Talk about you and Tim going your separate ways these last few years and then creating music on your own.

Bob Robinson: It’s crazy because when we first started working together, I was 17 and I’m 48 now. I learned a lot from Tim and I can still hear him saying “Don’t play it like this. Play it like that!”. Then you notice other things too because Tim and I never went to certain places creatively whether it was Tamar Braxton or some indie films. Those were completely than the path I was taking with Tim & Bob. It was cool to explore creativity. That’s what is cool about now when we’re working separately. People expect a certain thing from Tim & Bob. LA Reid taught us that the consumer will tell you what they want from you. I think this is a cool time to explore. I have collaborated with younger guys and I’m honored when someone calls me to work. A lot of marriages don’t last half that long. That’s a long time to have a friendship with someone and being creative. It was challenging for both of us. We may have just got tired of each other. *Laughs* It’s cool to see what Tim is doing now with SRG. He was telling me some cool projects that are coming up. Who knows, we might surprise everybody and reunite on a couple of things.