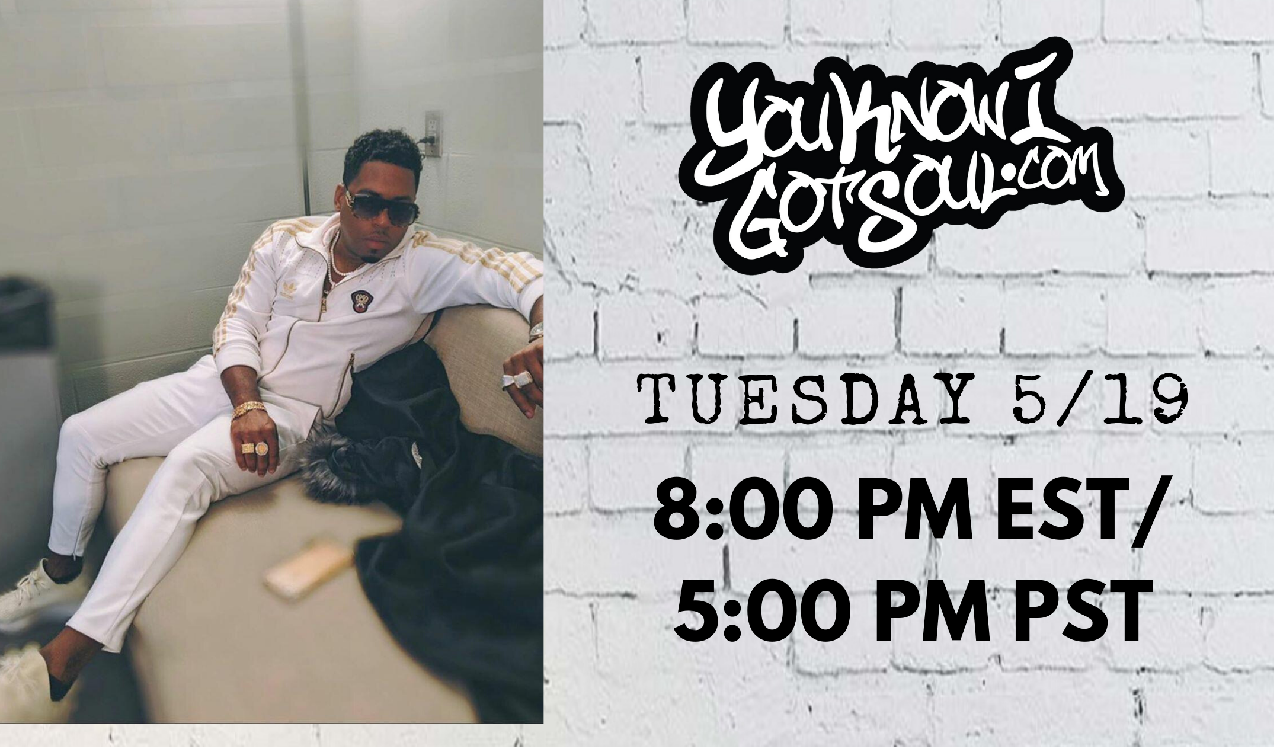 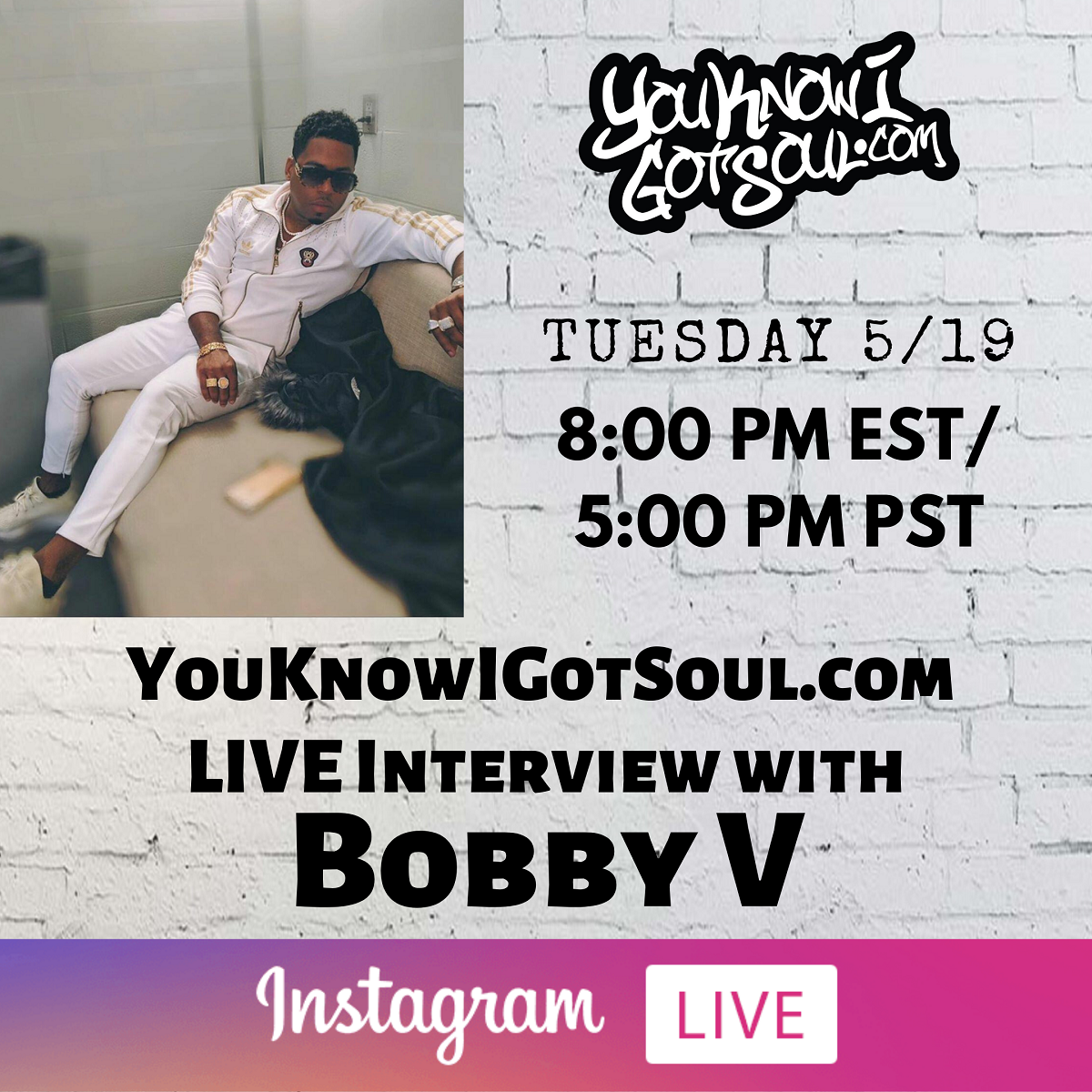 We recently had the opportunity to interview Bobby V. on Instagram Live. During our conversation, we talked about his new label Veltree Music Group and the new artists he signed, where is he discovering talent, his upcoming album “Sunday Dinner”, memories from the Millennium Tour, reflections of Mista, and creating his debut album.

YouKnowIGotSoul: Talk about your new single which you’ve released via your new label.

YouKnowIGotSoul: You’ve got this new label Veltree Music Group. Where do you go to discover talent?

Bobby V.: Talent is everywhere, you can go on Instagram to find talent. I have two guys I work with at the label. They brought me these guys. I just skim through the artists. I look at everything from how self-sufficient these guys. A lot of artists want a label to do everything for them. The label is really just to facilitate and put your music out and help your thoughts and ideas. A lot of new artists want labels to tell them their ideas. I’m looking at the artists and what they have to give. These artists I mentioned I signed have already put out music before and have their own visions. I’m just trying to help them get to the next level. I’m just trying to follow in the footsteps of the greats at the labels who make big moves. I’ve learned a lot.

Bobby V.: I’m really excited about that and I really want to drop that. It was supposed to drop in March, and then Corona Virus hit. Some things happened at my previous label SRG which we didn’t plan to happen. The album was leaked by them. Some people have heard the album. It’s cool. We’ve taken it back off. Hopefully we can drop the album before the end of this year. I plan to drop me and all of my artists’ albums at the same time. First I want to concentrate on the Veltree Music compilation album, which will have two songs from each of us, and a couple of songs with all of us. I’ve taken ZanMan Trippin & Santos Silva and put them on the same level as me. I took them on the road with me before Corona hit. Showing them the ropes. They did a lot of dates with me. I just signed them and threw them in the fire. A lot of people say they want to be artists but they don’t know the work that goes into and they don’t want to do the dirty work. I try to explain that on a daily basis.

YouKnowIGotSoul: Reflect back on The Millennium Tour. That was such a special moment for R&B having all of those artists coming together.

Bobby V.: That was a revitalization for me. I had been on the road doing spot dates. I was going through some things in my personal life and mentally. The Millennium Tour came at a time when I really needed it to uplift my spirits. I still do shows and do theatres and small venues. The Millennium Tour took me to a level, physically and mentally, it was a gift from God. I always reflect back on it, I never took any show for granted. I never took any day for granted on the whole tour. I cherished every moment and I put every memorable moment in my brain so I could always go back and relive those moments. After the Millennium Tour, I did my own tour The R&B Addiction tour this year. It was dope and I was having a good time, and my last show was at City Winery, and then everything started to shut down due to Corona Virus.

YouKnowIGotSoul: Talk about the time from when Mista disbanded in the late 90’s to when your solo career began in the mid 00’s. How did you persevere and never give up even though it took all of that time?

Bobby V.: I was the one in the group who was always trying to keep Mista together. I remember at a time, we were looking for management. Three of us wanted this one manager, and one of us didn’t like him. When that happened, I knew Mista was going to end. We went and took some photos with just three of us, the one guy who didn’t like the manager didn’t like that. I still tried to keep the peace. I just went to the studio to record songs for Mista by myself. At this time, I had just graduated from high school and went to Clark Atlanta University on a music scholarship. I’d go to class and then go to the studio and just record all night. Every song I was making was for Mista. But as I started to make these songs, I was just like did I really need a group? I was cool by myself. Did I really need to deal with 3 other people and a manager? I started to record all of these songs and work with different producers. During that time, I went to college, and I was pretty popular in college because people knew me from Mista. It was cool because I was kind of popular in school. Everyone knew I was a singer. Then probably my second year in college, we really broke up for sure. I just went on a solo quest and met different people and had a couple of deals here. One deal led to another deal. Things just kind of progressed from there. I was constantly grinding and working to become Bobby Valentino. That’s when my name came about in college as well. During that time, I was just so into music, and I’ve always been so deeply rooted into music. Every day after school I’d go to a studio and record. I’d be in the studio until 2 or 3 in the morning, and my parents wondered what I was doing so late. Then I’d have class at 8, so I was almost flunking out of school. It didn’t work out for me with that music major, they required so much of me, so I changed my major to mass communications. My dad said I would have gone to work for him. So I got my grades right! I did just that. My dad is a farmer working in horticulture. I’d work with him in the Summers. So I was just on grind mode during that time. With anything in life, when you see something, you can attain it. You have to have that pro vision, even before Mista.

YouKnowIGotSoul: Your debut album recently celebrated it’s 15th anniversary. What do you remember about creating it?

Bobby V.: I had run into Poon Daddy, he was Ludacris’ right hand man at the time. He said I needed to come out to California. At the time I had just graduated from college, and my parents had me all over looking for a job. I couldn’t find a job anywhere. This is how God is amazing. Right when you are at the last of anything, God comes in and puts his hands on you and makes it happen. I went out to L.A. and I vibed with Poon. I told him I wanted to work with Tim & Bob, they had worked on a 2nd Mista album that never came out. From that point, I knew they were so dope. They really touch a part of me musically that not many people can do. I remember when Poon told me to come out to California, and he took me to Tim’s house, and kind of just left me on the doorstep like a baby! Tim just took me in with open arms! Me and Poon did a lot of grinding out in L.A. A lot of going out to clubs, just parties and things that we really aint have no business doing. We were sneaking into places, dapping up the DJs, I was living at extended stays and different chicks houses. Then finally I was living in the hood, I didn’t even know it was the hood until Tim told me. So he told me to come stay with him. He took me under his wing and taught me how to dress. He said I was country! We’d be at his crib and he’d be making beats. That chemistry we had, we bonded, it was a brotherhood. The chemistry we had really created that album because he really got to know who I am. From there I just remember one day, the “Slow Down” really happened, it was real. He told me he’d take me to Melrose, I had never been there. I seen this girl, she had a pretty round thing foreal. That night we went to the studio and we wrote “Slow Down” about this girl! It was crazy when we did it. Tim used to do beats on his floor on the MPC machine. I might be sleeping, and he’d be on the floor making beats and finding samples! Tim will sit all day and make music. Every night he’d be always coming up with different beats.