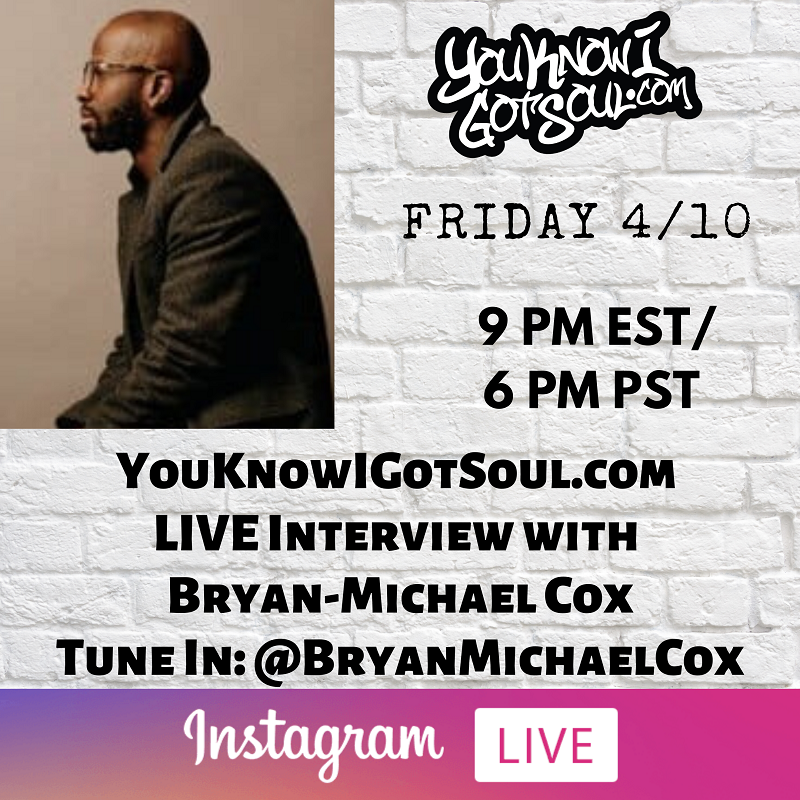 We recently got a chance to interview legendary producer Bryan-Michael Cox via Instagram Live. During our conversation, we went through his discography and talked about some of his biggest moments in the industry including creating hits for Jagged Edge, Usher, Mariah Carey and Mary J. Blige. There is a lot of information to digest so we suggest that you listen to the whole thing. We’ve highlighted some key moments below.

YouKnowIGotSoul: Why are there two versions of “Don’t Mess With My Man” by Nivea?

Bryan-Michael Cox: Nivea was originally signed to Noontime and they put her in the laps of myself with Brian and Brandon from Jagged Edge. That was our project at Noontime. We made about 12 songs for Nivea and for whatever reason, the deal fell through and Nivea ended up going to Jive. I don’t know who played them the song, but they ended up choosing that song. The original version of the song is the cleaner version. The version that is the hit, it has more of a edgy thing to it and the drums are different. I did the original track at a certain point in my development as a producer. By the time they wanted to put the song out which was maybe two years after I did the original track, I didn’t know they were putting out the song for real until they were shooting the video. I got a call like “They’re down here shooting the video” and I was like “To the original track? Oh no!”. I didn’t even know they serviced the song to radio. I just heard they were doing a video to the original version, so I went down to the video shoot to talk to them like “Please don’t put this version out. I’m going to redo the track. We cannot let this song come out this way”. I didn’t know they had already serviced it. I literally went back to the studio that night, made the new track and mixed everything all in one night. I turned it in the next day, but the original version was already serviced. That’s why there are two versions because they were already moving with the project, but they just slid that other version in.

YouKnowIGotSoul: Talk about the creation of Mary J. Blige’s “Be Without You”

Bryan-Michael Cox: Me and Johnta Austin made that song. I got a call from Kendu and Jimmy Iovine and they were like “We need a record for Mary. We need a rhythmic ballad” and they kept referencing Mariah Carey’s “We Belong Together”. I think they just assumed that I co-wrote that song because me and Jermaine did a lot together for that album including “Shake It Off”. I let them talk and then at the end of the conversation, I was like “I didn’t make that song. That song was made by Jermaine Dupri, Manuel Seal, Johnta Austin and Mariah Carey. You might want to call JD because I didn’t make it”. He was like “Well, make me a song then”. I called Johnta and told him we need to make a song for Mary. I literally made the track in seven minutes. As I’m finishing up the track, the door to my studio room is open. Sam is doing his engineering thing and my cousin Jason Perry walks by the room. I was working with Kendrick Dean on a regular basis, but on this particular day, Kendrick decided to go on a date that night. My cousin Jason is a musical genius, so I told him to put a bridge on the song. He came up with the four bars fast and then we played the track for Johnta one time and he was like “I got it”. This was a special night where everything came together. We sent it to Mary and she cut it that night. A few weeks later, Jimmy Iovine called and was like “Ron Fair has to touch the record”. I was very upset about that and Jimmy just said “Trust me”. Ron took the strings I already had and put this beautiful thing on it. It was my first time seeing Melodyne. We were able to take a lot of her background vocals and use them in Melodyne to give it this lush sound. I was a believer after Ron touched it. I was in New York working with Joe when Ron Fair was getting “Be Without You” mixed in Los Angeles. At this particular time, Akon and Bu are in the studio with me. We got the mixed version of the song and we played it. After the song was over, you could hear a pin drop. Akon was like “That is probably the best song I’ve ever heard in my life”. We played it again and it was a moment like “This song is going to be bigger than anything I could ever imagine”. We knew the song was going to be ridiculous. I had already been working and making my name, but “Be Without You” was a moment.

YouKnowIGotSoul: The work you did with Day26 may arguably be your best. Talk about the records you guys did together.

Bryan-Michael Cox: Day26 was special to me because I was a part of the process. I was able to sit with Puff and help pick and mold the group. I knew when we did “Exclusive” with the last 20 guys, I remember figuring out who was who vocally. I was just super impressed with what we came up with. The first album was so easy. I didn’t get down with the shenanigans with the reality TV show, I was just about the work. The only time you saw me was when we were picking the group and when we were in the studio. Day26 will always be near and dear to me. It was just really dope to work with them. That first album, I did a co-publishing deal with Aion Clarke. He really helped me mold the sound because I was so excited about working with him. Aion is a phenomenal songwriter and he inspired me in so many ways. That’s how we made records like “Don’t Fight The Feeling” and “Are We In This Together”. Aion just put new energy into me as a person. Adonis came in and wrote records like “Since You’ve Been Gone” to round it out. The group is still able to tour today. I had an amazing time working with Day26 and they’re still my guys.

YouKnowIGotSoul: Tell us about the new Usher album.

Bryan-Michael Cox: It’s coming. At the end of the day, I feel like now the pressure is on. I think we have to press the gas a little bit. I feel like people are asking for this music. They put out the Lil Jon and Ludacris record “SexBeat”. From my perspective, the album is close to being finished. We’re at the end of it unless somebody comes with something ridiculous. I feel like we’re at the end of it. It’s a great album and I feel like Usher fans are going to get what they’ve been asking for and talking about. We had a good time making the project. It’s good because our synergy is good and I’m excited about the music. I feel like this album is going to be a phenomenal Usher album. Usher is aware of what people want, so this particular album is very deliberate about giving people what they’re asking for.