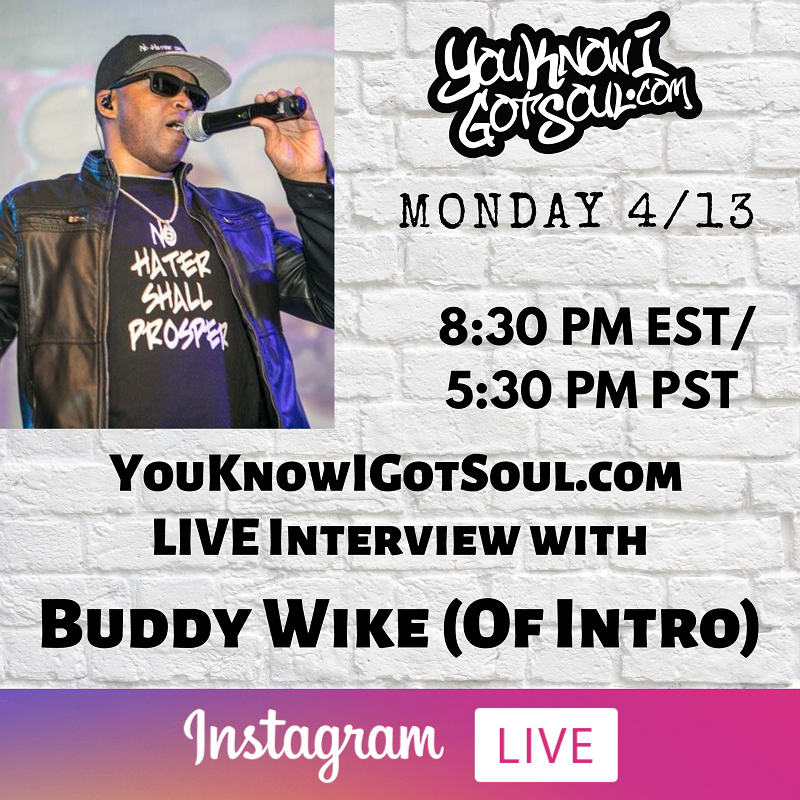 We caught up with Buddy Wike of the R&B Group Intro recently on Instagram Live. During our conversation, we discussed what Intro has been up to in recent years, the history of the group’s signing, the first and second albums, the legacy of Kenny Greene, and when we can expect new music. Buddy even played an unreleased song for us. Check it out.

YouKnowIGotSoul: Bring us up to speed with what Intro has been up to lately.

Buddy Wike: R.I.P. to Kenny Greene. Shout out to Jeff Sanders and to Eddie F and the whole Untouchables family. Post Intro, we’ve still been on the road doing the 90’s circuit concerts. There was a whole time where we didn’t even go out and perform. During the early 2000’s, we were just home chilling and working on new music. I did a gospel album for a lady named Phyllis Stephens, who has a very successful son who goes by the name of John Legend. I’ve been in the studio building up a catalog. Then the phone started ringing for us to do shows.

YouKnowIGotSoul: How did you even decide to carry on Intro without Kenny Greene.

Buddy Wike: I just shut down when he passed. It was a great time of my life, and I looked at it like it was an era in my life and that was pretty much it. As far as performing, that’s it. I didn’t really want to do it anymore without him. As far as being a songwriter and producer, I was already that before Intro. So I knew I would be after. That was definitely a big blow to my heart. A lot of my creative ideas and juices I was feeding off of Kenny. There was a lot we were writing together. When Kenny passed, a part of my creativity I felt like had left with him. There are a lot of songs me and him wrote together that I’d never do with anybody else out of respect to him. I’m careful of that. He was a really good dude. Besides being one of the most prolific songwriters of our generation, he was really a good dude. He was my little brother.

YouKnowIGotSoul: Share with us what your role was in the group as far as creating.

Buddy Wike: The whole chemistry of Intro was, I was the producer, Kenny was the songwriter, and Jeff was the choreographer. Prior to Intro, when I first met Kenny, when we sat down for the first time. I sat at the piano and played some chords. Just write off the bat he’d start coming with lyrics. Anytime I’d play some chords, it could be whatever, he had the answer for it. Then when we ran into Eddie F, he had the hip-hop beats for it. That was my role to the group. I’d come with the Gospel chords. Prior to being in Intro, I wanted to be a producer, then I got an idea I could be a rapper. I was in a rap group with Jeru the Damaja. As far as being an R&B artist, that was beyond my wildest dreams. I taught Kenny piano, and he taught me how to sing.

YouKnowIGotSoul: How did you originally sign with Eddie F and his Untouchables label.

Buddy Wike: We met Heavy D at a club called The Red Zone. We were singing a song that Jodeci had done with Heavy D called “Peaceful Journey”. We got to the club and we saw him there. We let him hear us sing his song. We pulled him to the side, and let him know. He asked to hear it. He took down our number. I watched how he took our number. I watched to see if he’d fold it up and put it into his wallet. But he balled it up and put it into the bottom of his pocket. I figured he’d never call us! He called us like a week later and told us to come up to New York to meet Eddie F. That’s how we linked with Eddie F.

YouKnowIGotSoul: Many R&B lovers consider Intro’s debut a classic album. What do you remember most about creating it?

Buddy Wike: A lot of the album was recorded in Mount Vernon, NY. We were within a tight team, it was a team called Untouchables. Prior to that they were doing remixes, they did a remix for Jeff Redd. Our first week in the studio, Eddie sent us to another studio to work with Jeff Redd. He called us to his house, I saw this girl on the couch chillin, I’m talking to her. It turned out that was Mary J. Blige. The next day another dude walked in, it was Father MC. Then it was Heavy D. Then it was Puff Daddy. Our whole environment was the meat of the 90’s, all of that. It was right in our face in the same house. It was called the Playground out in Alpine, NJ. He had a studio called the mini mansion. We went there, he put on hip hop beats, and we just created. In the middle of doing those songs, popped off the Mary J. Blige songs. “Reminisce”, “My Love”, “Love No Limit”. After we recorded each song, on the drive back home I’d listen to it. And I thought to myself we had something. It was different than what was on the radio. It would always be the three of us in the car. I had a Volkswagen Jetta at the time. I had a feeling that album was going to be something. I didn’t know it was going to be something good or something bad, but I knew it was different.

YouKnowIGotSoul: You had the cover of Stevie Wonder’s “Ribbon in the Sky” on that album. What was his reaction to hearing it?

Buddy Wike: I don’t know his initial reaction, but I do know we recorded the video for the song in Los Angeles. The evening after we recorded the video, I jumped on a plane and came back to New York. I’m a native New Yorker, when I’m gone too long, I get homesick! I left the guys in L.A. and when I got home, my mother told me Kenny said to call him. I called Kenny and he told me I should have never left, we were going to meet Stevie Wonder the next day. All I remember was grabbing my bag and heading back to Kennedy airport. I was back in Los Angeles the next morning. They took us out to Stevie Wonder’s house. It happened to be Kenny’s birthday and it was a dream come true. That wasn’t enough for him. He knew we were coming. He sent out people to get a birthday cake for Kenny, he called over his friends like Johnny Gill. He threw a party for Kenny. Then, the icing on the cake, we got to record a song with him. It was “I’m the One Who Loves You” which is on the Curtis Mayfield tribute album called “All Men Are Brothers”. If there had been cellphones during that time, I’d have all of the footage. He was playing air hockey! He was beating everybody; he could hear the puck. It was an amazing experience.

YouKnowIGotSoul: Let’s talk about the second album “New Life”. What do you remember about that one.

Buddy Wike: A lot of people feel like we went in a different direction. We never got a chance to really explain it. After the first album, Atlantic Records put us on tour, for about 2 ½ years. When it was time to go back in and do the second album, Kenny’s dad died. So we toned it down, we had some things to get off of our chest. It was more of an inspirational album and it was all dedicated to Kenny’s dad. I knew that and I had to actually stand back. On that album, I wanted to write, I wanted to be a producer and catch up on the first album on the second album. But I had to fall back and let him vent. What’s missing was pretty much a lot of what I added to the first album. Out of respect, I had to.

YouKnowIGotSoul: How come Intro never recorded a third album, prior to when Kenny passed?

Buddy Wike: We actually recorded a third album. Kenny came back to New York and we recorded about 15 songs. We had left Atlantic and we weren’t signed. We were going to do things on our own. We just wanted to record an album and then go and shop it. We recorded a ton of songs, some of them have leaked onto the internet, I don’t know how. It sounds like what was supposed to be the sound of the second album.

Buddy Wike: We had a bunch of records like those for the third album. Unfortunately, God had other plans to bring our brother home. We just never released that album.

YouKnowIGotSoul: Is there ever going to be another Intro album? You guys have released singles over the years.

Buddy Wike: We are doing a documentary right now. Along with that, that’s due by August or September, there is a soundtrack with it that will have some of the unreleased music. That will pretty much serve as our third album. It will be unreleased material along with new material. We’ve tried adding people to the group over the years, but it never worked. They always want to fight me for some reason. It’s because it had to be right. I won’t settle for anything less than what Kenny, Buddy and Jeff would settle for. Every single time for some reason, they just always want to fight me. It’s not like I was disrespectful to them or anything. I’m strict with the brand. I have to preserve Intro. It’s bigger than all of us. My whole thing was, I don’t want people to say Intro died because Kenny passed away. It doesn’t mean we have to have another hot single. I just want them to know Intro was a movement and a sound. Nobody really knows who we are. They know the music. I’m that same way when it comes to my favorite groups. One of my favorites is the Brand New Heavies, but I don’t know any members. As long as we have a nice little slow movement 25 years later. I’m still getting envelopes in the mail from stuff we did 25 years ago.