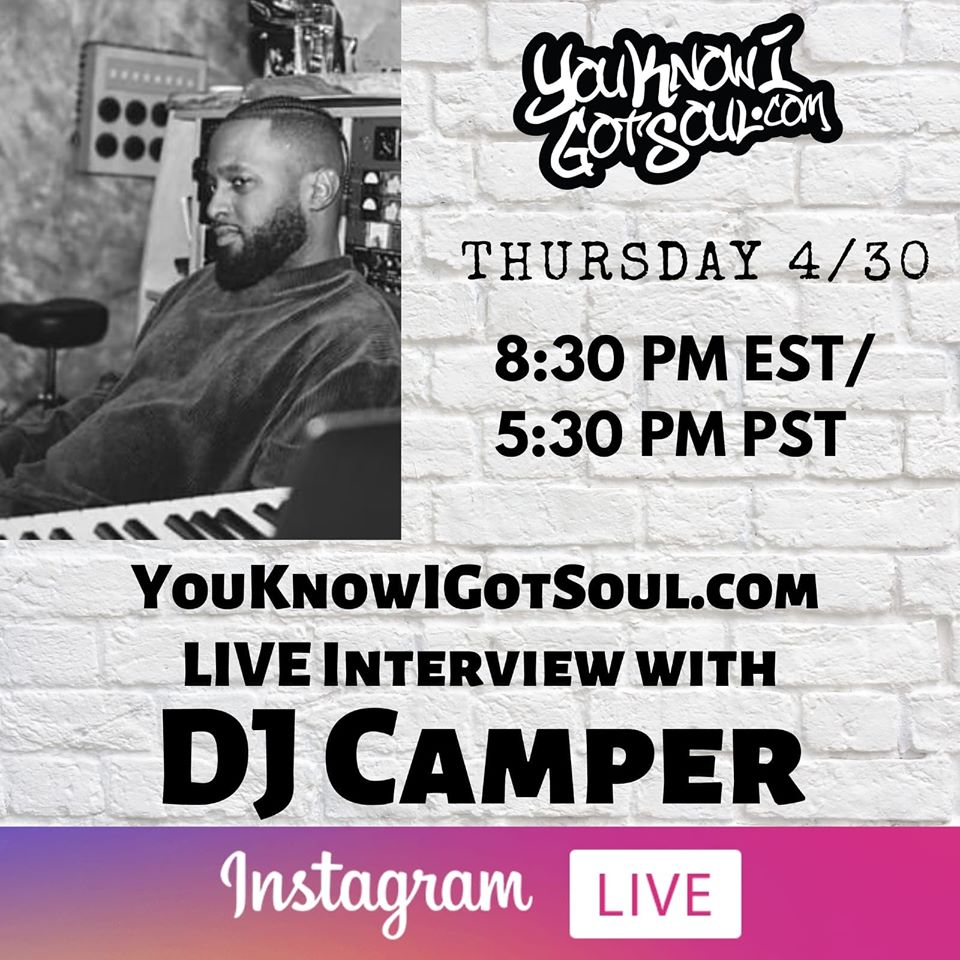 We recently caught up with producer Camper for an interview on Instagram Live. We talked to Camper about becoming the go-to producer in R&B right now, working on upcoming projects from H.E.R. and Brandy, his solo album and much more. Check out what he had to say below.

YouKnowIGotSoul: Did you know that H.E.R.’s debut EP “Volume 1” would change the game like it did?

Camper: Yeah, I knew. I knew because it changed me. It moved her and it changed me. We were rocking and I was like “This is crazy!”. I wasn’t driving to New York, I was taking the Greyhound from Atlantic City for the sessions. I was doing the sessions and then I would take the last bus home at 1 AM. I would get home at like 3:25 AM. I would drive home and listen the songs that we did. I would be driving at those hours and I was like “This is some crazy stuff we have going on”. I knew we had it. She has an amazing talent and nobody is seeing her like that right now. I’m just very fortunate to have H.E.R. I’m her go-to right now and she’s dope.

YouKnowIGotSoul: Talk about what you and H.E.R. working on right now.

Camper: It’s just a cheat code. It’s like when Shaq and Kobe or when LeBron and Wade played. It’s like Timbaland and Missy Elliott or Rodney Jerkins and Brandy. Name a better duo this season and I’m laughing because it’s so much music that we have. We have so much music together and we’re just sitting on it. Stay tuned. We’re going to figure out what we’re going to do, but we don’t run it. We are the ingredients to R&B.

YouKnowIGotSoul: Do you remember when it all clicked for you? You’re basically on top of R&B right now.

Camper: I have had moments but I haven’t fully said to myself “I’m here!”. I’m still in grind mode and I still have things to prove. No matter how much people say “You don’t need to anything else” but I still have so much more work to do. I’m going through changes and it’s about to get crazy. It’s beautiful.

YouKnowIGotSoul: You’ve been working with Brandy for a few years now. Talk about what we can expect.

Camper: I know you have been waiting for this Brandy album for a long time and I’m not going to let you down. This is the album of the year. Every song on this album is song of the year. It’s a long time coming and it’s just an amazing feeling to have someone who loves and connects with you beyond the measure. It’s just a blessing for someone to see you that way. The album is crazy. It’s a lot of feeling, emotion and hits. It’s classic. We took our time and LaShawn Daniels was like Phil Jackson. He was just coming in there and killing it. We were in there all day. We were doing 16 stacks and then we tried like 18 stacks at a point. The more she stacks her voice, the more of the transformation she becomes. I really had a joy working on this project and I’m glad that she chose me to carry out the vision. We have a lot of music that’s unreleased outside of the album. We may do a mixtape called LaBran Camp. *Laughs* I think I made like 70 beats and I was pouring my heart out 70 times.

YouKnowIGotSoul: You’ve been talking about your solo album for a minute now. Are you rapping or singing on this project?

Camper: It will be a singing album and it’s from the heart. I’ve gone through some things in my life that I have to talk about and the best way I know how to describe myself is through music. I stopped being a little girl about singing and I’m going to use all the gift and talent that God has given me. I went to Miami and did some soul searching with some of my teammates. I was making beats and we were singing melodies. Before you know it, we had 15 songs done. Then I went back to LA and my manager was so mad I had spent so much money in the studio, but it was money well spent. That was our apartment for a month and it was amazing. We finished the album there and we had album listening parties. I’ve been sitting on the music for a few months now, but I’m about to drop the first single “525” in a few weeks and I’m ready for the journey to begin.

YouKnowIGotSoul: We don’t know anything about you as an artist, only as a producer. What will your solo material sound like?