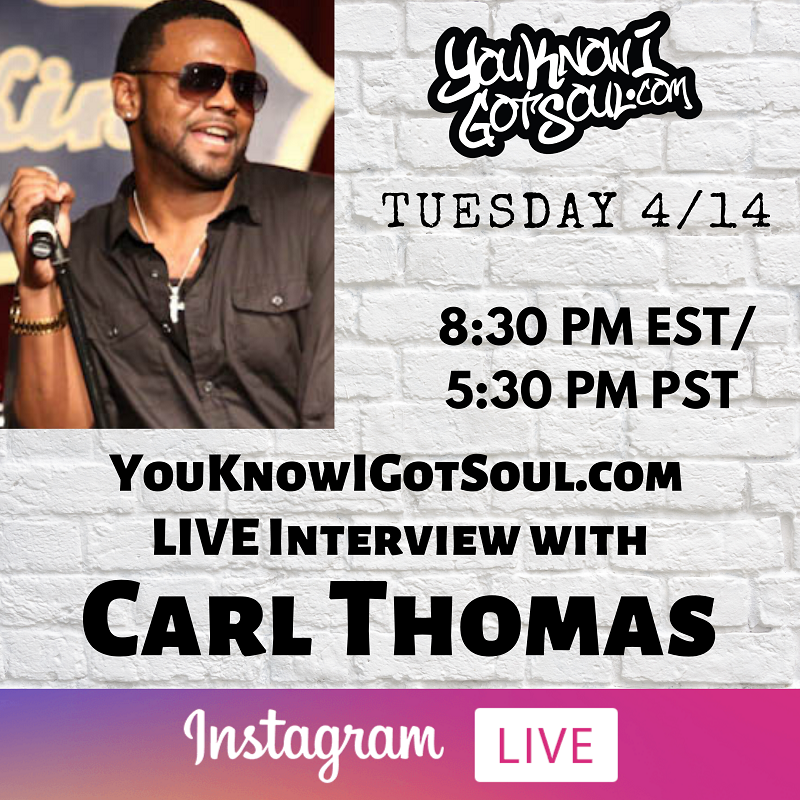 Carl Thomas joined us on Instagram Live recently for an interview to celebrate the 20th Anniversary of his debut album “Emotional” from 2000.

During our conversation, we discussed what he remembers most about creating the album, the big hits, how he got signed to Bad Boy and being part of that movement, when to expect new music, and much more.

Check out what Carl had to say below!

YouKnowIGotSoul: We are celebrating the 20th anniversary of your debut album “Emotional”. What do you remember about your mindset of creating that album?

Carl Thomas: I just remember it being a really exciting time. You don’t really know that you are actually a part of any type of history until you take a couple of steps back and realize that you are a letter that’s a part of a word that’s a part of a sentence that’s part of a paragraph that’s part of a novel that’s being written. So you never know, you just plan it out as you’ve always planned it. For me to be in that position to record that album, I worked a long time to put myself in that position.

YouKnowIGotSoul: What do you remember about being around the legendary Bad Boy Records movement in that era?

Carl Thomas: It was a lot of things. It was school. If you paid enough attention, you got a sneak peak into everybody else’s opinion about what it is we’re doing and you get to compare notes. I didn’t realize at the time how important of an era that I was putting bricks on. I didn’t really understand at the time. I definitely thank God that the album was the foundation of my career. A lot of artists don’t get that opportunity to be debuted with such a definitive piece of work. One day I want to let everybody hear the records that didn’t make the album! It’s definitely interesting. A lot of the stuff was up for debate if it should have made the album. All in all, I’m proud of the project.

YouKnowIGotSoul: You had some huge hits on that debut album like “I Wish”, “Summer Rain” and “Emotional”. What do you remember most about those songs?

YouKnowIGotSoul: Back in that era, it seemed like you were on almost everyone’s single, hooks for hip hop artists. What do you remember about all of that?

Carl Thomas: That definitely was just a pass time that I learned how to make money from. I grew up in that culture. I was one of those kids who was running home to watch Rap City. I really thank God for still being here. There are a lot of artists who are not here for whatever reason. Grace don’t look the same to everybody. I had to understand that and relax in my own grace and this is a career unlike any other genre. You never have to retire from R&B. I’ll be doing this when all of my hair is white!

YouKnowIGotSoul: The amazing thing about what R&B artists like yourself has given us is music to help us heal during this tough time in the world.

Carl Thomas: It definitely is a blessing to be woven into that fabric. I have music that I gravitate towards that helps me relax. To be considered by somebody else in that manner, that means a lot definitely. We talk a lot about certain records. But there are a lot that didn’t get their shine or recognition.

YouKnowIGotSoul: Take us back to the open mic days in NYC where you were before you got signed.

Carl Thomas: Many people will never understand that era. That was the 90’s for me. I wasn’t putting out records, I was preparing for 2000 to put out a record. That open mic era really set the tone and allowed me to make the connections that I needed to. Chaz & Wilsons, Café Wha, The Blue Angel, Tuesday night at Nels, The Village Underground. It wasn’t that easy. Open mic in New York in the 90’s was very competitive. I go there now and everybody is cool and friends. For us, we were all cool and friends on that circuit, but we had a goal in mind, which was to lay down in the path to opportunity and make sure somebody got tripped over us.

YouKnowIGotSoul: How did you get signed to Bad Boy?

Carl Thomas: Bad Boy was my third record deal, I had a record deal prior to that with my group, The Fourmula. I know you know about that! I remember Biggie was actually invited to go out and be the opening act for R. Kelly’s “12 Play Tour”. I believe he came off of the tour on a Sunday morning, and was looking for somewhere to go on a Sunday night in New York. He came to Chaz & Wilsons, and Puff came with him. It was a timing type of thing. I just happened to be on stage doing my thing and Puff walked in. Afterwards, I went back to the table I was at, and Puff sent a note over to the table like “Yo, do you have a record deal?” He was really cool with it. We just started talking that day and we developed a relationship. We’ve been cool ever since. Puff just got it. He was one of the people who got it. He asked me all of the time, how I saw myself. I never knew why he asked me that so much. But I see now that he wanted to see if he could marry my vision for myself with his vision for me. I think he did a really good job of that. That’s one thing I can say recording that album, he listened to me a lot. I was used to producers being a little more stern than that. Puff was a little bit more open to experimenting. We recorded a lot of records for that album.

YouKnowIGotSoul: It’s been about eight years since your last album and you know us R&B lovers are not patient! What’s the latest on that.

Carl Thomas: I am going to release a single this Summer. Quarantine or not, I don’t care. I’m looking forward to that. I definitely know it’s been a minute since I released material and I don’t talk a whole lot with the fans about music. I really should. I think I want to open that whole conversation in my life about music and rhythm & blues. I want to help it progress. I’d like to help it move along in a respectful manner and in a fun manner. One thing that a lot of R&B artists have to remember is that we are responsible for a lot of things. A lot of times we forget we are responsible for having fun too. Sometimes we can be so cool and introspective that we’re not even having a good time. It’s a time and place for everything.

YouKnowIGotSoul: Was “I Wish” a personal experience?

Carl Thomas: It was a funny story. The girl that the song is about…it was cool to put that story out there. I really didn’t know that a lot of brothas went through that. I thought my project hit different because no woman likes to hear a man complain. But I did it in a slick way. There is a lot that went into recording the album that I didn’t know. There were pieces coming together I didn’t know would play such a big part. Like “Summer Rain”, one of the most interesting songs on the album. That was written in a Range by DJ Rogers Jr. It was produced by Heavy D and Warryn Campbell. I didn’t really know that “Summer Rain” was going to be what it was going to be until I finished that first verse. But once I did, I kind of walked out of the booth and walked around in a circle. I knew I got one.