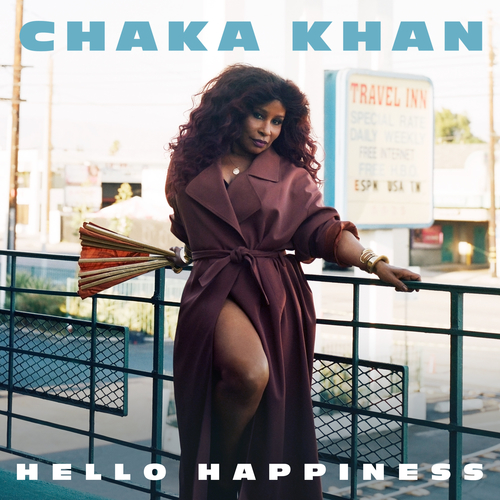 The Queen Of Funk Chaka Khan is set to return with her first album in 12 years with the upcoming release of “Hello Happiness”. The album will release on February 15th and features the title track which came out recently.

She continues her reemergence with the new album which will release via Diary Records / Island Records, the new label formed by Major Lazer founder and Grammy-nominated producer Switch with artist/songwriter Sarah Ruba Taylor.

‘Hello Happiness’ is an album which sets Chaka Khan’s timeless vocal to an empowering collection of songs with cutting-edge production. With an eye on the future and a respect for the past, Chaka Khan has delivered an album with the contemporary edge to entice newcomers to her world class talent and the quality to excite long-term fans.

That’s exactly what the title track and new single ‘Hello Happiness’ achieves. A tribute to the life-affirming power of music, it combines the sass of ‘I’m Every Woman’ with the invention of ‘I Feel For You’ while also feeling precisely in tune with the current sonic.

The soaring ‘Like A Lady’ feels like Switch has been teleported back to the great late ‘70s New York disco scene, while Chaka rolls back the years with one of the most powerful performances of her career. That’s something she also demonstrates with the swaggering strut of the sultry R&B anthem ‘Too Hot’. ‘Isn’t That Enough’ and particularly ‘Don’t Cha Know’ find her embracing bold new elements to her sound, while the laidback, minimalist groove of ‘Ladylike’ gives her the space to prove that her vocal has clearly grown in stature over the years.

Chaka Khan first collaborated with Switch and Ruba Taylor as a potential featured artist on a different project. Inspired by the power of both her voice and personality, the duo suggested working on an original Chaka Khan album – something which she didn’t have in mind. But she was soon convinced when she heard some of Switch and Ruba Taylor’s songs, which coincidentally were influenced by Chaka Khan but written for their own project.

Chaka chose her favourites and stamped her identity all over them, with her inimitable vocal gift and dynamic energy taking each track to new heights. Switch and Ruba Taylor also provided the groundwork so that Chaka Khan could concentrate on making her first set since 2007’s ‘Funk This’.

Also included on the album is the previously released single “Like Sugar”.