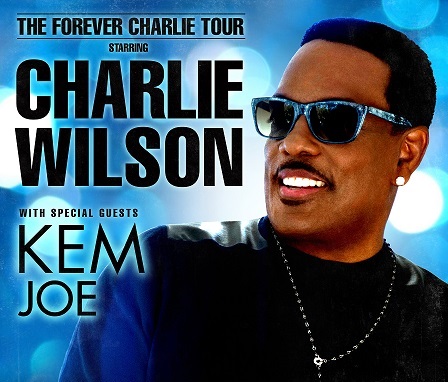 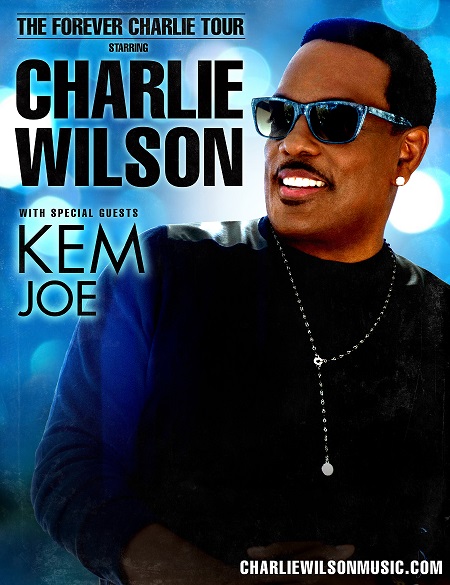 Grammy nominated artist Charlie Wilson announced today his new national tour Forever Charlie will kick off on February 12, 2015 in Cleveland, OH and will wrap on March 27 in Oakland, CA. The tour is named after Wilson’s upcoming album that is slated for a January 27 release on RCA Records. Charlie Wilson’s new single “Goodnight Kisses” was the #1 most added song at Urban Radio and Billboard says about the single “…Over snap-and-swing doo-wop-inspired production, the GAP Band co-founder sings sweetly about his loved one’s smoochies. At 61 years old, Wilson is still as convincing a romantic as ever.”

Fans who pre-order Forever Charlie, from the singer’s official on-line store, will gain first access to pre-sale tickets for the upcoming tour (http://myplay.me/1cv2). At the time of purchase, buyers will receive a pre-sale code. This particular pre-sale will begin on December 9 at 10 AM local time. The general public on-sale begins December 12 starting at 10 AM local time. Detailed information will be available on www.charliewilsonmusic.com.

American Express® Card Members can purchase tickets before the general public beginning Wednesday, December 10 at 10 AM through Thursday, December 11 at 10 PM. All times are local.

VIP packages will be available and will include a seat within the first 10 rows and a meet and greet with Charlie Wilson (among other exclusive VIP tour items).

“I am so glad to be on the road once again and to bring my show to so many cities across the country. It’s going to be a special night for all the ladies that will join me and my special guests!” says Charlie Wilson. “I am looking forward to sharing the stage with my two talented friends Kem and Joe. They are both artists that I admire and am honored to have them on my tour. We are planning a show the audience won’t ever forget.”

Jeff Sharp, Vice President of Urban Touring AEG Live says “The Forever Charlie Tour is the most prominent R&B tour for an adult urban audience that is scheduled to hit the road in 2015 thus far. The fact that three of the most important male vocalist/entertainers of our era are sharing the same stage nightly is something that brings AEG as a company to commit any and all of its many assets to the project.”

Wilson has received seven Grammy nominations and multiple awards throughout his career; he was named Billboard magazine’s #1 Adult R&B Artist and has had eight #1 records that topped the Billboard Urban Adult Contemporary radio chart including, “Without You,” “Charlie, Last Name Wilson,” “Magic,” “There Goes My Baby,” “Can’t Live Without You,” “You Are,” “Life of the Party” and “My Love Is All I Have.” Most recently, Wilson received a Grammy nomination for the song “If I Believe” in the Gospel category; he was also an NAACP Outstanding Album Award winner for the album Love, Charlie and BET presented to Wilson a Lifetime Achievement Award in 2013.

THE FOREVER CHARLIE TOUR DATES:
*All dates and venues below subject to change.