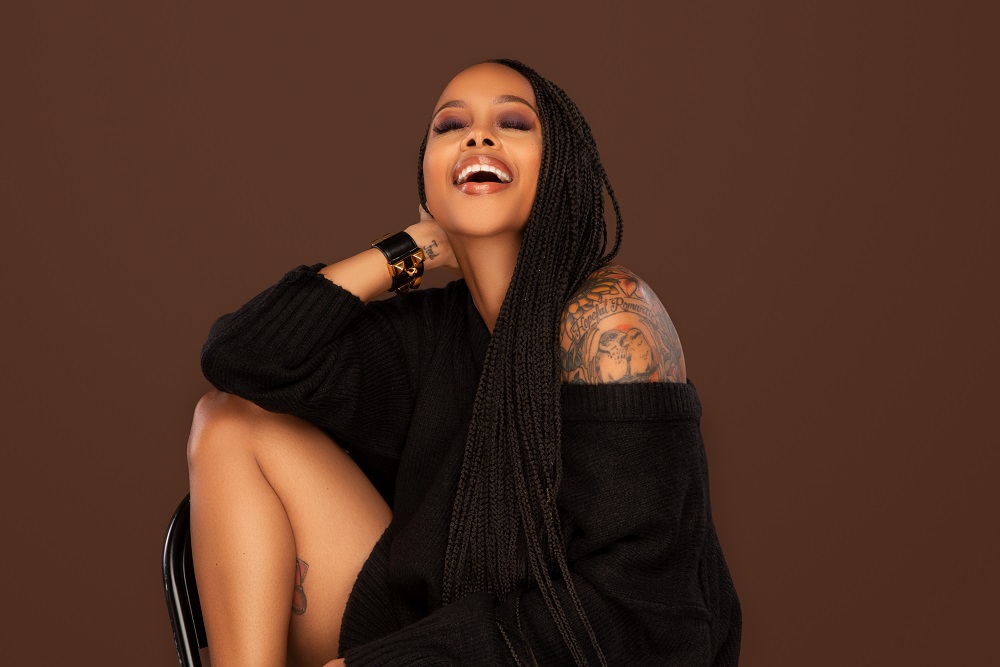 We recently caught up with Chrisette Michele for an interview on Zoom. During our conversation, we touched on her recently released single “Wait”, how her sound has evolved over the years, what we can expect next from her as far as new music. how she didn’t let the controversy of a few years ago tear her down, the new community she’s been able to build up, and much more.

YouKnowIGotSoul: You returned earlier this year with the new single “Wait”. The sound really brought us back to the sound you had early on.

Chrisette Michele: When you’re in quarantine or isolation, you just do what you do. That guitar meets warm melodies meets classic American melodic structures: verse, chorus, verse, chorus, bridge, chorus. That’s who I am. That’s what you got, because I just had me. That was written about a year and a half ago. It was on the end of me walking out of my last love relationship and into a new place, getting a new mattress, all of that kind of stuff. Wondering how long the wait would be before my next experience in love.

YouKnowIGotSoul: It’s been fun to watch your journey and the evolution of your sound over the years. From your debut album “I Am” which was jazzy and soulful, to your latest album “Out of Control” which was more progressive. Which sound will you be going for next?

Chrisette Michele: I’m going to tell you the truth, I think it’s going to be a sound that you love. It’s going to be straight, classic, glamour girl r&b. We need to just have some fun, with some glam! Where everybody picks up their microphones and sings along for fun. You will see a stream from now on in general of faith based music at any given time. For instance, in two weeks I’m releasing a song called “Walking Testimony”, and a week after that I’m releasing a song called “The Manger”. I think that a part of me is just a song releaser, it’s not about charts, or if it gets an award. But the other part of me, I love to serve the R&B community. That’s what I’m about.

YouKnowIGotSoul: We recently went back and revisited all your albums. It made us realize you’ve almost gone underrated at this point, and you’re clearly among the greats of your generation. You’ve given us so much good music. How do you look back at your body of work?

Chrisette Michele: I don’t think about it as much as music connoisseurs do. So when I hear someone like yourself, I just know what it means to appreciate the gratitude. I’m grateful for the people who do experience it and understand that it’s a person growing. That’s a fun thing to hear. It’s a fun reminder of how I’m seen. I gotta be honest with you. When I look every three months at my royalty checks, and I look at all of the songs on that list. As you saw, it’s a lot of music! You see all of the countries where people are listening and streaming. You realize that there’s a part of yourself that is an offering. Not everybody in your present world has any idea of what you’re giving other people. So some people would say that’s a thankless job. It has a return on the investment. What I think about my catalog is that it’s rich and that it serves people and that it will be here for a long time and I’m very thankful for that. I’m also thankful for the ability to be present in the here and now and figure out what’s next for me the person.

YouKnowIGotSoul: You are a big believer in the power of love. How are you able to portray that in your music for others to feel?

Chrisette Michele: I’m an actress! I love makeup and dresses and cameras. I turn on some songs. I don’t try to shy away from that fact. I’ve written songs that I have not been through. I know that people love to feel. That’s part of the reason why we listen to music. We go to Broadway to feel, we go to movies to feel, we listen to music to feel. So I’m a drama queen when I sing, because I love to play. That’s where it comes from, from being an actress and playing.

YouKnowIGotSoul: R&B music is in such a different place than it was when you came out in the late 2000’s. How have you over the past years had to cope with that and adjust to the changes?

Chrisette Michele: I wasn’t raised on R&B you know. I think you know this about me, I studied vocal jazz, and I was raised next to a saxophone. So I’ve been coping with not having a saxophone on stage for 15 years! Sometimes what you do is something that you really love but it’s one part of you. Then sometimes you get to play with the other sides of yourself and other spaces. For instance, on Instagram I just released 16 songs of jazzier music. I don’t have to get paid to do that; I like to sing. But if you want to pay me to sing R&B sure, what time do we need to be there.

YouKnowIGotSoul: You had been through some controversy a few years ago and there were many fans who no longer wanted to support you. How did you deal with that and manage to overcome it?

Chrisette Michele: It’s funny because it goes back to that streaming catalog where you kind of look and see people talking through consumption. So who exactly do I serve. How did they walk away? In what space did they leave me. A lot of that leaving came in the form of unfollowing on social media, or not being welcome in certain circles. But the people who appreciated my sound, and who appreciate me as a person and who had some insight into who I am, continued to listen. That doesn’t mean they liked my decisions, but I remained listened to musically. So what did that mean for me personally? You kinda separate the art from the person. As a person, of course it was eye opening. At any given moment, someone can ask you to leave them alone and never speak to them again. When that happened, it takes a minute or two to release your grip from them. You say if you no longer want me here, I’ll go. That transition period if people no longer wanting me, took me some time. I knew there was some love there, and there was some hate there. The love that was there was just really upset and disappointed. I wanted to be able to explain, but there is a lot of sounds around me. I did the best that I could. Now, four years later, a lot of the connection is coming back. The conversation is resurfacing. But I’ve grown. I love that we’re in communication again, but I don’t know if I’m the same person you left back there. So if I don’t serve you in the same way, I’m still open to being in conversation. I think that’s where I am now. How do I serve that community now.

YouKnowIGotSoul: We’ve interviewed you a whole bunch of times over the years, and can really tell how much of a great space you’re in at this moment.

Chrisette Michele: Yes, and it’s always interesting to link back up with somebody who had spoken to me before and see what they see is different or the same. For me, you grow every single day, so I can’t really see what’s changing. But to somebody else if it’s been a year, they have time to notice the difference.

YouKnowIGotSoul: Love seeing the awesome community you’ve built online through your website and social media. You are doing a lot of positive things and have a movement going. Talk about that.

Chrisette Michele: Thank you for noticing, because that’s what being in a niche is all about, it’s who notices. If this person notices, then that space is for them. If another person doesn’t notice, that space is not for them. What’s really exciting is that there is a space for positivity. In the beginning when I first started going in that direction, there was a lot of resistance. I was very diligent about staying consistent through the resistance. Something told me it was going to grow. It’s really cool now three years later for people to see it as a positive platform. When three years ago it was a really uncomfortable space.

YouKnowIGotSoul: Talk about some of the other cool things you’ve got going on.

Chrisette Michele: I have a clothing line and that was one of the moments where the audience we’ve been talking about has been able to show up and show out. We put it out, and it was maybe 13 pieces in total. It wasn’t like this huge department store. It was a capsule collection. Half of the collection items sold out within 24 hours. We had to immediately restock and restock sizes we weren’t carrying before. Then we’re doing a completely new launch for the holiday and birthday collection. So that has been wonderful. People want to celebrate more than I realized. I didn’t realize people wanted a new dress for Christmas or a cute outfit to wear around the house. We’re all saving money, nobody wants anything. So when it sold out I was in shock. So we’re going to keep going, it will be fun. Then the other cool thing is the sistership community. TheSisterShip.org is where women can go and join a community of women that are in that same positive space. I hear a lot of similar stories in my e-mail and I hear a lot of people thinking that they are the only one with that story. I tried to trick all of those women into one room and let them one at a time talk. All of the girls went “You too??” Now all of the women are like “Oh my God, I’m not by myself!” So the plan is working.

YouKnowIGotSoul: Let us know when we can expect your new music.

Chrisette Michele: For you, I’ll give you the answer! The answer is, I’m going to continue about once a month to release a heart song. That’s a song kind of like “Wait”, the next song is called “Walking Testimony”, the one after that is called “The Manger” for Christmas time. But I think next Spring, I want to release a really fun R&B project. I just want to go ham; pools, yachts. I’ll have to borrow from my friends Rick Ross and Wale, but I’m sure they’ll let me! Just have some fun with the R&B space, because I think that we could use it.