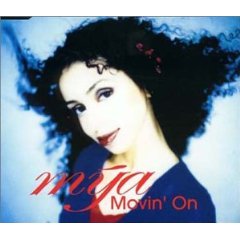 “Movin On” is the second single from Mya’s debut album “Mya” in 1998. The album didn’t perform well at first, but went on to reach platinum status after the attention she got for performing on the grammy nominated “Ghetto Superstar.” Mya releaesed her fifth solo album “Sugar & Spice” last year as a Japan only release, and has a new album in the works due for release in early 2010.