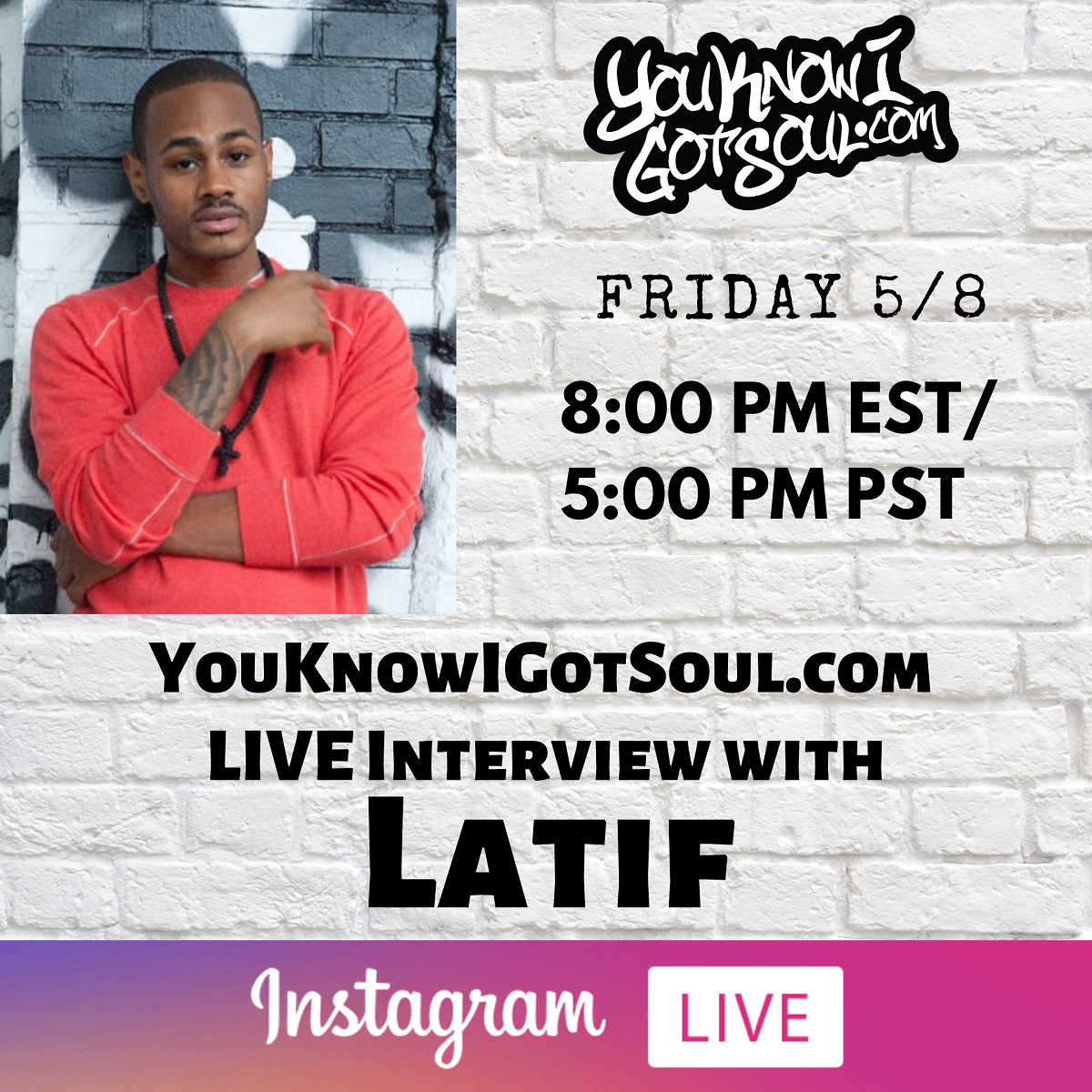 We recently had the opportunity to interview Corey “Latif” Williams on Instagram Live. During our conversation, we talked about his debut album “Love In The First” and what he remembers about creating the project with Ryan Leslie. We also discuss his songwriting behind the scenes for likes of Musiq Soulchild (“Teach Me”) and Chris Brown (“Damage”). We also talk about his success overseas in markets like Japan and Germany. Lastly we talk about his new duo project with Aalias under the name Lo Boii.

YouKnowIGotSoul: What do you remember about making your debut album “Love In The First”?

Latif: I met Ryan Leslie like my second year in school and we started collaborating almost instantly. We had that chemistry and we started writing songs with the understanding that we’d just be writing these songs like a Jimmy Jam & Terry Lewis. We decided with me taking a record deal and a lot of songs that we were writing ended up being my demo. I mean we re-recorded a lot of them, but these are songs that got me my deal. Then once we moved to Chicago and did the rest of the record with the exception of the Adonis, Sean Garrett and Teddy Bishop songs. Those songs came way later. Ryan and I did songs like “It’s Alright”. My demo at that time was done by James Poyser. From the jump, I always had like the best material. But yeah, Ryan and I did the meat of that project in Chicago and it was an experience.

YouKnowIGotSoul: Sean Garrett did the single “I Don’t Wanna Hurt You”. You were a young artist at the time, but your music was still mature and it was never kiddie. Was that intentional?

Latif: Yeah, if you notice like even like the Jackson 5 records, they’re grown records, My voice has so matured so much and now I can emote way better than I could even on the record. If you think about Teddy Pendergrass, if you think of his songs and you hear his ad-libs, they’re mainly right? Like I always wanted to make a song that anybody could relate to you know whether it’s a kid or an adult, but what I noticed about the great songs and great artists before me like the Jackson 5, they didn’t make kiddie records. They were real songs. I was like 19-20 years old, so it’s like you really you think you’re grown. Neither me or Ryan were married, but it was so much energy. You know people were coming out with so many different styles and stuff. It was so fresh and like we were hearing what Pharrell and Chad were doing and we would study that.

YouKnowIGotSoul: What was your next move after the release of your debut? I feel like that album is underappreciated.

Latif: I knew immediately how that the album was handled that I had to I had to leave Motown. This was against their advice for me to be off the label, but Ryan and I were writing first. Part of the reason why we moved to Chicago was for me to focus on my album. You see with the labels, the mismanagement of funds and tour support. I think they shipped out 40,000 of my album, so you can’t go gold. If you noticed like sometimes an album would come out around that time and ship platinum, that means they sent out a million copies. So if you send out 40,000 copies, it’s damn near a miracle that it’s reached people the way it has. I knew immediately I had to get off of Motown and once I got off a Motown and then you got to think, September 11 happened so that shifted the business, I knew that I had to go back to my grind because I was a songwriter initially.

YouKnowIGotSoul: You’ve written some great songs behind the scenes. Talk about the “Damage” song that you did for Chris Brown.

Latif: I did that song with the Runners. We would always talk to each other via Myspace or whatever, so when I finally went to Atlanta, it was me and I was in one room and Jasper Cameron was in another room. Jasper did songs like “Promise” by Ciara and he wrote a bunch of Lloyd smashes. The Runners gave me the “Damaged” track and at the time, it was a bunch of dudes in the studio. So I was like “Oh man, like the pressure was on”. I was at the computer just thinking like “Maybe I’ll do this concept”. I fell asleep and when I woke up, the room was closed but I had the whole song written. It’s like the song came to me in my sleep. Jasper told me “That song is for Chris Brown!”. I remember I had a link to Tina Davis’ brother, but I never heard anything back.
I just stayed on my grind because you never know where a song is going to land. You just put it to the side and somebody may pick it up later on or whatever. So I did a writing trip in Atlanta. I’m walking through the airport and my phone goes up and it’s DJ Khaled on the phone. He’s like “Congratulations! That song is a smash”. So I went out to LA and cut the record on Chris. Chris was actually hoarse. His voice was hoarse when we got to the studio, but his voice just came to life after he had some tea and honestly, Chris Brown is like when I hear people talk about Michael Jackson. Chris Brown is like another level with his aura, like he’s just so inquisitive and he’s just naturally inclined.

YouKnowIGotSoul: I know you have a huge following overseas in Japan. Was that from your working relationship with Ryan Leslie?

Latif: The Japanese market came to me because of the song I did with Stargate called “Promise Me”. The harp was similar to Ne-Yo’s “So Sick” and a lot of people loved it. A lot of people don’t even know that Ryan and I worked so closely together. Like even when he had the film crews around, but I wasn’t into the cameras and stuff like that at that time. Japan was the “Promise Me” Stargate stuff. Now Germany? That was Ryan Leslie. That was because the Next Selection server was hacked and they couldn’t get enough of that stuff. So “Think You Know” was the catalyst for that. We had a friend who was like “You guys are super big in Europe”. People would sell the vinyl for 20 euros and this was all the songs that they had hacked. They were selling it and we had no idea. Rather than just taking the loss completely, we were “Let’s go over and do some shows”. During one of the runs, the club went crazy for “Think You now”. Ryan didn’t even like that song because it wasn’t fast enough. People think Ryan produced it but Kadis & Sean produced it. Ryan put the rap verse on it way later after he saw everybody liked it.

Latif: The focus is LoBoii. It’s with my partner Aalias. He’s worked with Rihanna, Eminem and DJ Snake. So he and I started writing records for other people around 2012 and our chemistry is incredible. That’s the new wave and like especially with this pandemic, you have to prioritize. It’s the first time I actually took time to focus on a project that we were going to release. The next project is stupid. I see a lot of people talk heavy and stuff about R&B music, but you gotta create some new stuff and you have to take risks. You have to push it and you can’t push it with trap drums. You have to evolve it. I just want everyone to be tuned in and this next project is really going to push it