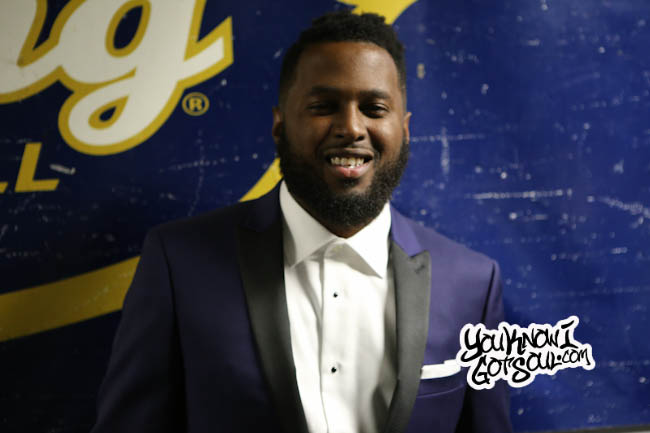 In just about four years, DJ Camper has been able to establish himself as one of the premiere R&B producers in the industry working with the likes of Keyshia Cole, Tamar Braxton, Ne-Yo and John Legend. DJ Camper reached new heights in 2016 thanks to the success of the Mary J. Blige single “Thick Of It” as well as the H.E.R. project. 2017 looks likes another huge year for the Grammy nominated producer as we can expect him featured on a lot of upcoming albums. YouKnowIGotSoul had a chance to speak with DJ Camper about his upcoming work.

YouKnowIGotSoul: Congratulations on the success of “Thick Of It” by Mary J. Blige. I’ve heard a lot of people say that it’s her best single in a long time.

DJ Camper: It’s just a blessing to even being in that predicament. It’s a great honor and feeling. I’m just happy to be part of greatness. It’s the fastest song to hit number one for her in like a 21 year span. That’s a great feeling for me to have under my belt when it comes to a legend like herself.

YouKnowIGotSoul: You’ve worked with her in the past. You guys did the song “Self Love”, but what was the approach working with her this time around. “Self Love” is a classic DJ Camper song where as “Thick Of It” sounds more like a combination of some of the modern sound along with the classic stuff.

DJ Camper: It was just a matter of being in the room with her. “Self Love” was a track that I did with Sam Dew and we sent it over to her. She got it, loved it and cut it. That’s how it made the “Thick Like a Man Too” soundtrack. When I got in with her this time around, I stopped everything and I was like “What do you need?”. She told me what she needed. She wanted it to be raw, authentic and for it to move her. I had this idea I did for Drake that kind of described what she was talking about. I told her “I think Drake is going to take it, but I’ll play it for you”. As soon as I played it for her, she was like “This is the direction for my whole entire album”. I had to make a decision on whether I was going to wait on Drake or do this Mary J. Blige situation right now to lead her project. I went with Mary, but Drake is still my brother for life. I felt like Mary needed this, so I made it happen. This is only the first song of a few that I have on the album. Every time you hear one of my tracks, it’s going to be just like that, if not better. It’s dope to be in that position.

YouKnowIGotSoul: How did Jazmine Sullivan get involved with the song? I know she wrote it.

DJ Camper: We sent the track over to her and she penned it. She sent it back and she was like “I don’t know how I feel about this”. We heard it and we went crazy over it. It was just a dope situation for her to be in too. Shout out to her for killing that and being part of legendary status.

YouKnowIGotSoul: You have a couple on the new Mary J. Blige project. Talk about the work you’ve done on it so far.

DJ Camper: So far I have 5 tracks. We’ve done 10 songs, but I think she’s keeping 5. The album is coming shortly. The process was great. I did the majority of that project with writers like Prince Charles. Charles wrote “Needed Me” for Rihanna. We’ve done work for the new “Star” TV show as well. I’ve been rocking with him heavy. We did the Mary stuff together. We were in a room with Mary. She would give us ideas of what she wanted everything to sound like and I would take it from there. I would give her what she needed and we built a friendship and bond even outside the music. So when it was time to make the music, it was easy because we were already connected. I already knew how she wanted things to sound musically and she knew what to expect from me. When we got to that point, it was a wrap and it was easy. The sessions were very organic and very special.

YouKnowIGotSoul: The other project you have right now is H.E.R. Talk about your vision as you executive produced her project.

DJ Camper: We just have to keep it going. We have a great buzz with over 30 million streams worldwide. She’s still a mysterious individual, so we just want to run with it. She’s coming up with a “Volume 2” project and that’s going to be coming out very soon. I will be executive producing that project also. It’s going to be good. If you thought “Volume 1” was good, wait until the second part. It’s just a vibe. Every round goes higher. It’s not a one quitter. It makes you say “Who is that? We want some more music”. When the music comes out, the world will not be disappointed. I’m working on that now and putting the final touches on it. We have a couple of surprises that I can’t reveal, but just know it’s going to be worth the wait.

YouKnowIGotSoul: Talk about your mindset when you started on the project. It’s very current, but it’s also very classic.

DJ Camper: We just went in there and we were vibing. I wanted to give her a new sound. She played me some stuff that kind of made me have an epiphany of what I had envisioned for her sound and what I wanted to tailor-make for her. It’s the first time I’ve been able to do that. It’s cool to get in with Drake, Beyonce, Alicia Keys and Jessie J because they’re established, but breaking a new artist with a new sound rarely happens. When it happens, it’s beautiful. H.E.R. is an elite now and she’s above. She’s a classic artist now. If H.E.R. stopped doing music, she would go down as one of those artists that came and changed a part of music because she has so much influence. You have a guy called H.I.M that’s taking everything we’ve done and stealing it. She’s low key the culture right now. She’s all over the blogs and people love her. Everybody is with it, so as far as making the music, I was just experimenting with a lot of stuff. i was trying to make it as current as possible, but just as classic as possible. Just giving her a “Real Love” with a Bryson Tiller drum beat or Lauryn Hill meets Metro Boomin drums. It was just mashing the two and really just giving people the best of both worlds. She doesn’t sound too young or too old. H.E.R. isn’t an age, she’s a vibe. There is no age or color on her. She’s a vibe and a mood. I wanted to give her that and I wanted to create that for her. Thank god it’s really blossoming and that’s a blessing.

YouKnowIGotSoul: The marketing behind H.E.R. is so different from anything we’ve seen before. Obviously it’s a good thing, but it could have been a huge miss because she has no identity. What did you think of the marketing when you first heard about it?

DJ Camper: I was like “Okay, let’s see what happens” and it worked. I didn’t question anybody and I just let the chips fall where they may. It’s paying off, so it’s good. It’s almost like when Gorillaz first came out and you didn’t know who they were. It’s the same with Daft Punk. It’s working in our favor right now and that’s dope.

YouKnowIGotSoul: We’ve seen some artists who are stealing that idea right now. That has to be disappointing right?

DJ Camper: Yeah, but at the end of the day, you know you’re doing great when you’re inspiring others to mimic what you do. We had to put a stop to H.I.M. because he was taking my beats and messing with them. He was taking all of our melodies and he was really just trying us. It’s all good though. That’s why we’re here though. I’ve been inspired by a lot of people, so it’s cool that we can be an inspiration.

YouKnowIGotSoul: Are there any other projects that you’re working on? I know you were talking about a Brandy EP last time.

DJ Camper: I’m just trying to take one project at a time. I still want to visit that one day, but I have to finish that. It’s not done yet. I’ve been just so focused on other projects, so I haven’t gotten around to that one yet. It’ll get done in due time. I’m working with Bryson Tiller right now. I’m working with A$AP Rocky as well. I have a couple of songs on the new TV show “Star” that’s coming out. Mary J. Blige has another single coming out that I’ve done.

YouKnowIGotSoul: Are you going to be on Sevyn Streeter’s album?

DJ Camper: I don’t know, but we cut a lot of songs together. I’m not sure if she’s keeping any of them. I’m working with Teyana Taylor too. Her stuff is coming amazing. I was just with her for a few days, but I’ve been rocking with her heavy. She’s a joy. She’s very talented, humble and she’s very hungry. She’s a workaholic and she’s about her business. With all of that being said, her stuff is going out crazy. It’s going to be a hell of an R&B album. I’m also working with Big Sean. I’m going to be on his new album too.

YouKnowIGotSoul: You’ve mentioned all these different artists you’re working with right now. How important is it for you to be in the studio with the artist instead of sending them tracks?

DJ Camper: Right now it’s very pivotal for me to be in the studio with the artist. I feel like I’m owed that right because of who I am now and what I’ve accomplished in my career. Also I just want to get to the know artist. I don’t want to just send you tracks. I want to have a conversation with you and feel the vibe, so I know what to play you. The vibe is very important. Everytime I’ve gotten in with somebody, we’ve caught a vibe. Because we’ve caught that vibe, making music is easy. That’s what happened with Jessie J, Big Sean, Bryson Tiller and Teyana Taylor. It’s great to be in that space. In my opinion, it’s more about people liking you versus people liking your music. Whether your music is mediocre or not, people will like it if they trust you. I hang out with you everyday, why wouldn’t you take the beat? YG and DJ Mustard are boys, so it’s easy for them because they trust each other. Same with Mike Will and Future. I can do the same thing with Jessie J. She’s going to cut it because she trusts me. It’s the same thing with H.E.R. and Drake. It’s just great to have that connection and relationship with those artists. It makes the whole process easy.