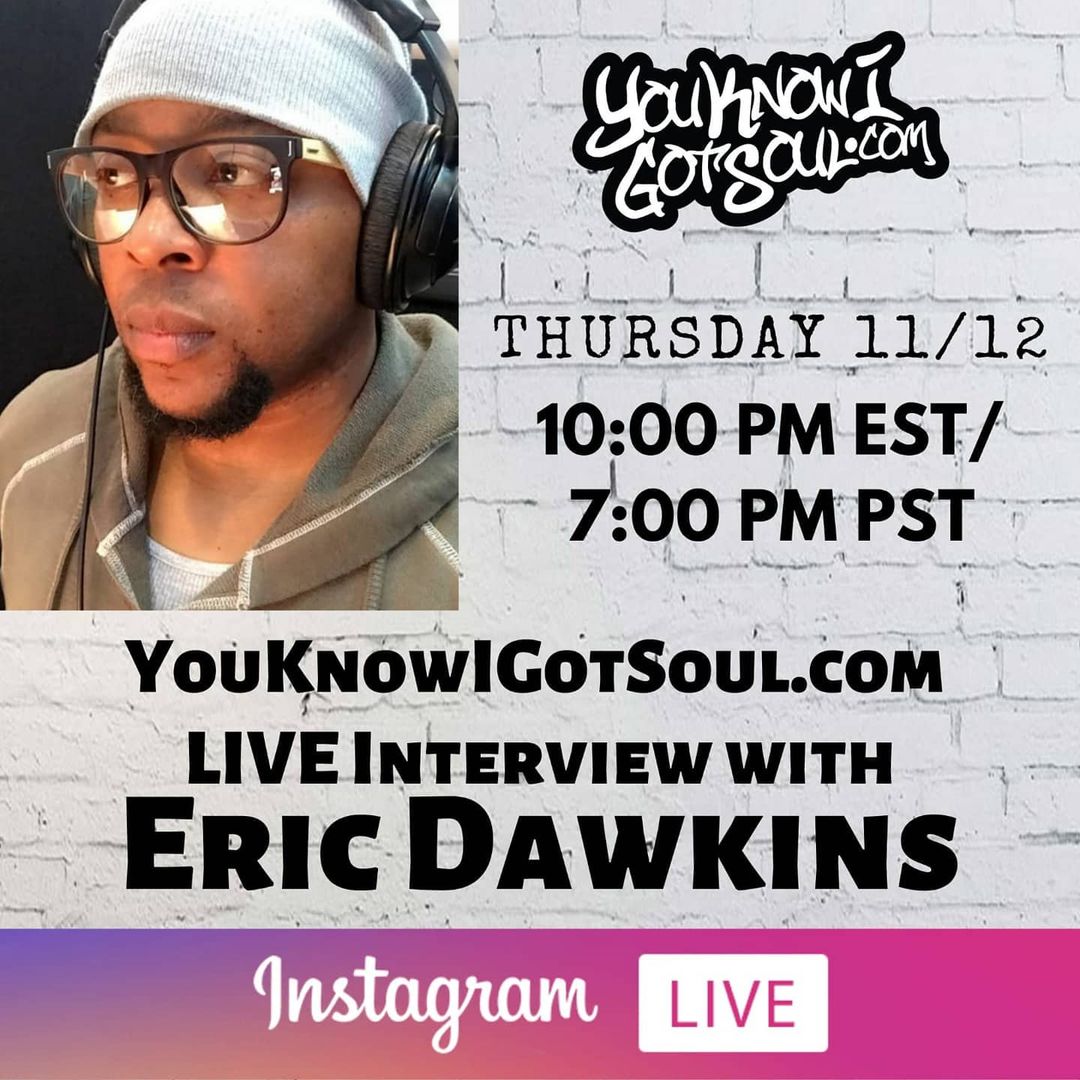 We recently caught up with Eric Dawkins from the gospel duo Dawkins & Dawkins. They have been releasing music together since 1993 and have become a household name in the gospel. In the R&B world, Eric has been equally as successful as he’s responsible for crafting a lot of huge hits behind the scenes for the likes of Tyrese, Omarion and Tank. In our interview with Eric, we talk about his history with The Underdogs production team, his creative process and also what he has coming in the near future.

Eric Dawkins: There’s a backstory to that song and a lot of my followers know about it. My friend Focus… who produced the song, he lost one of his sons in a car accident and he asked me to pen this song for him. I just wanted to talk about being in a dark place and losing something so dear to you and still being able to say that God is good. Just from me talking to him, I gained the inspiration from the song. It’s really a celebration of life and understanding we’re all living in a crazy time right now. I’ve lost several people to COVID-19 and even last year losing LaShawn Daniels.

YouKnowIGotSoul: Take me through the early stages of Dawkins & Dawkins and grinding in this industry.

Eric Dawkins: For us it wasn’t as much of a grind trying to find our way. Fred Hammond heard our potential that we didn’t see. We were just church kids and he saw the potential. He took us under his wing and showed us the ropes as far as producing, songwriting and arranging. We got a crash course in the music industry touring with Commisssioned for a few years.

YouKnowIGotSoul: People love the “Focus” album that came out in 1998. What kind of clicked for you during that time?

Eric Dawkins: We ended up at Harmony and we produced a lot of that. We had full creative control. Rodney Jerkins did a few songs on there as well as J. Moss. We had been hands on even on the first record and J. Moss was one of the only ones that we allowed to give us a song that was already done. We just sang what he did on the record. Other than that, we were just very hands on. That “Focus” record meant a lot to us and garnered a couple of our biggest songs.

YouKnowIGotSoul: Talk about your transition from gospel to R&B. Was that in the plans originally for you?

Eric Dawkins: I don’t think it was a plan that I had. I moved from Detroit to LA in 1996 and I started establishing myself as a songwriter. From there, things just took off and we met with Ron Fair. I worked with Christina Aguilera on writing and vocal production. People started finding out that I could do tracks too.

YouKnowIGotSoul: You’re known as one of the best vocal producers in the industry. Talk about your approach when vocally producing for artists who may not have the abilities that you do.

Eric Dawkins: Being a vocalist, I have a level of empathy and compassion for singers. There’s certain things that I wouldn’t trying to get someone to do if it’s outside of their skill. I pride myself on having detours for days. Even if it’s a reference that I did and somebody wants to do something that I did, I’ll always have an alternative for something that will complement their voice. A good vocal producer knows how to hear what a person’s strengths and weaknesses are and really capitalize on the strengths. It’s about camouflaging the weaknesses whether their tone is not the good or they don’t have a lot of range. You just have to know how to make songs that complement their voice. It doesn’t take long for me to know someone’s voice and be able to create something that makes them sound good.

YouKnowIGotSoul: You’ve done a lot of work with Tyrese like on he song “How You Gonna Act Like That”? That song defined his sound as an artist.

Eric Dawkins: I just found out that “How You Gonna Act Like That” is his biggest song ever. I think “Sweet Lady” was the biggest one for awhile. Tyrese says that me and him do duets. There are certain people that I work with, I try to channel how they will sing it. I do a mean Tyrese impression when I’m singing. Another one is Dave Hollister, I make it sound like he’s singing it. Mario is another one. He’s able to mimic my tone on the songs I did for him. Ruben Studdard and Joe are other ones that I’m able to channel and tailor the songs to them. Me and Tyrese work good together. Tyrese has a million ideas and I know how to take six of those and make them great.

YouKnowIGotSoul: Talk about working with Tank early on during The Underdogs era.

Eric Dawkins: I had met Tank a few years before he was brought into the Underdogs. He was fanning out because he was a huge fan of Dawkins & Dawkins and I was fanning out because I loved “Maybe I Deserve”. When he came in, I knew it was going to be crazy because The Underdogs ended up being Harvey Mason Jr, Damon Thomas, myself, Antonio Dixon, Steve Russell and Tank. It was like an unfair basketball team. I also have to mention J. Valentine because he did some work with us too like Mario’s “How Could You”.

YouKnowIGotSoul: We look at Tank’s “Sex Love & Pain” as a classic album.

Eric Dawkins: It definitely solidified Tank has a bonafide R&B staple. It was just a well rounded project. Lyrically and sonically, it was just great. “Maybe I Deserve” put him on the map, but this was the pin on the map. This album solidified him as one of the go to crooners like Joe and Brian McKnight. That album did that for him.

YouKnowIGotSoul: You’ve worked with a few projects that were released under Blackground such as Tank’s “Sex Love & Pain”, JoJo’s debut and Toni Braxton’s “Libra”. How do you feel about those albums not being available for streaming?

Eric Dawkins: That has to do with the label they’re on. We have history with the label and Barry Hankerson. If you know who Barry is, you know the deal. Going into those projects, we knew it could go either way. It could be like “Why did we agree to this?” and it could also be some great stuff. I think we got some great stuff out of that. It was just an unfortunate turn of events. I’ve sat with JoJo plenty of times and had to hear her frustrations being stuck in that system. Even for me, there would be times where I would want to work with JoJo but I would have to pass because businesswise it wasn’t going to turn out good for me. We’ve reconnected and did some stuff on her last couple of projects, but that whole era was a little weird.

YouKnowIGotSoul: You ended up splitting from The Underdogs around 2007 and formed The Pentagon with Antonio Dixon.

Eric Dawkins: The reason I left the Underdogs is because Harvey and I had some differences in opinions. It got to point where I needed to leave before it turned into something it didn’t have to be. Me and Antonio had a pact and we did a lot of stuff together during The Underdogs era. We made a pact that if either left, the other one would come and we would start our own company. I left and I told him he didn’t have to leave because it was an abrupt exit for me. Within a couple of weeks, Antonio parted ways with them too and we started our production team Anonymous. The cool thing is that the people we had worked with, I had established a relationship with. Artists saw who was doing what in the studio, so it wasn’t like they didn’t know I didn’t do a lot of the vocal arrangements or that Antonio had a lot of the track ideas. We were very capable to go out on our own. We had a nice run doing songs with Chris Brown, Tyrese and some JoJo stuff. Something happened with Harvey and Damon and then Damon asked if he could be part of what we were doing. After that, we named our production team The Pentagon because it was going to be five people. It was going to be me, Antonio Dixon, Damon Thomas, Tank and J. Valentine. Tank and J decided they didn’t want to do that anymore and they formed Song Dynasty. We did that for a couple of years and did some major stuff. After that, Antonio Dixon started working with Babyface and I really wanted to focus on doing some stuff myself. I worked with Mary J. Blige and Tyrese. I’m still being labeled as The Underdogs sound which is not a bad thing. I feel like I can say with all confidence that I helped create that sound.