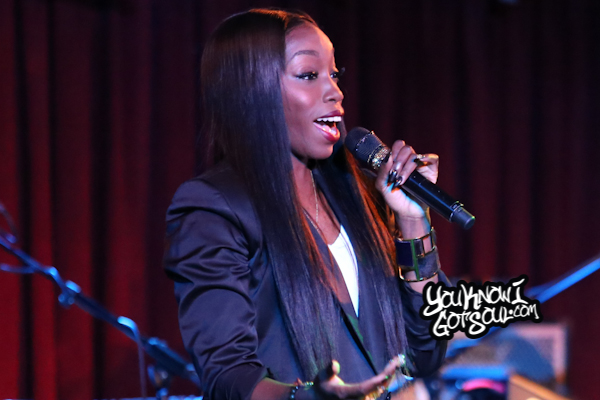 Estelle took her career next level in 2015 when she released her album “True Romance” independently on her own imprint. The album birthed the single “Conqueror” which introduced her to the “Empire” audience and proved that she could make it without the aid of a major label. Now as a veteran who has been in the industry for more than 10 years, she’s looking to build off the success of her past hits and experiment a little bit with her new Reggae album. Estelle has always been known for her versatility and she’s ready to put that on full display. YouKnowIGotSoul had a chance to talk to her about her new single “Love Like Ours” as far as the direction for her upcoming project. We also talk about her grind as an independent artist.

YouKnowIGotSoul: You have the new single “Love Like Ours” which has a little bit of a different sound for you. Talk about the creation of it.

Estelle: No, not really. I don’t think it’s different. I think we’ve done it many times before. Anytime someone does anything that’s concentrated and in one direction, people are like “It’s new!” but I’ve done many reggae records before. This is just one in the lineage. This is part of a new album though and I’m excited about putting it out. I’m a very flow based artist and I roll with how I feel versus the direction and this has been a long time coming. I’ve had songs like “Come Over” which was almost ten years ago and I have records like “Magnificent” and people were like “So are we getting a Reggae album next?”. This is definitely the time.

YouKnowIGotSoul: Your last album “True Romance” had so many strong R&B records on there such as “Silly Girls” and “Gotcha Love”. What made you go in a new direction this time around?

Estelle: Well I have a record on there called “Be In Love” too. I never stopped recording and I had a bunch of Reggae sounding records around that time. Everything after that album ended feeling like this, so we just kept it going. We did it over a period of time and the sound was just building, so we wanted to continue it.

YouKnowIGotSoul: How did the collaboration with Tarrus Riley come together on the single “Love Like Ours”?

Estelle: I went in the booth and it just happened that he was in Miami at the same time. We got to working and they asked me who I wanted to work with and he was one. He has a brilliant voice and he’s an amazing artist. He’s legendary. His songs are in the similar vain of what I do as far as classics 10 years down the line. It’s the same kind of thing and it works. He makes great music, so it’s just par for the course.

YouKnowIGotSoul: Your sound always sounds authentic even though you try different genres. What’s the key to that?

Estelle: I think with me, it’s the truth. I’m not making this up. I’ve lived in all these genres. I grew up default to where I was born. I have a West Indian step dad and an African mother. I lived in London my whole life, so it was planned. It was Queen and Wham! and then as I got older, it was still that stuff but also Queen Latifah, Biggie, 2Pac and Dipset. I’m influenced by all of it and I love it. This isn’t a means to an end or anything, this is actually something I love. This is why I wake up in the morning. It’s believable because it’s the truth. If I did a Rock record, it would be equally as truthful because I love Rock. I had to actually sing to Bon Jovi one time and I felt like he believed me. He’s one of my favorite artists, so there’s nothing better than the truth.

YouKnowIGotSoul: What made you decide to stay away from the R&B this time around?

YouKnowIGotSoul: Do you think your last album “True Romance” got the attention that it deserved? It was an independent project for you after being on a major label for a while.

Estelle: It did what it was meant to do. “Conqueror” was the main single that everybody loved and it did great. I don’t particularly judge my own body work on success of whatever because I don’t make records for that reason. I make the records to touch people and the record did that.

YouKnowIGotSoul: Being that you’ve been an independent artist for a couple of years now, what do you think you’ve learned that will help you along the way?

Estelle: Well I started my entire journey as an indie artist. Ownership has its benefits and it’s just about putting in the work. I’m just working.

YouKnowIGotSoul: You’ve been in the industry for a minute now and you’ve touched on so many different genres. Do you think your fans from the beginning are still here?

Estelle: Oh yeah, absolutely. People that have heard “Shine” and even the beginning of my career, people are still tweeting me about “Love Like Ours”. People are super excited I’m doing a Reggae album and to me, they’re still loving it. For those who were just there for “American Boy”, they’ll come back around or if they don’t then that’s fine. It’s just not their style of music and that’s cool.

You can listen to Estelle’s new single “Love Like Ours” by clicking here.