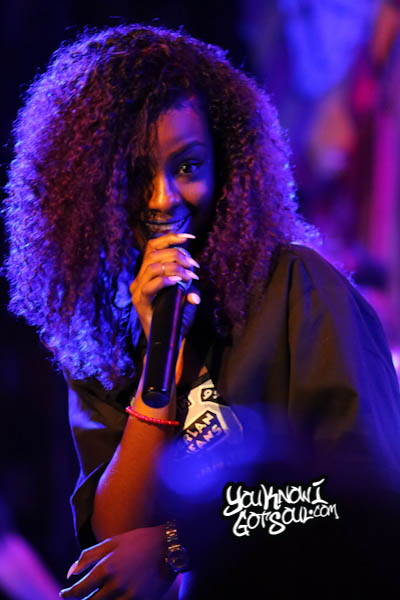 Justine Skye made her U St Music Hall debut Saturday night in Washington D.C. to a crowd full of “Unicorns” eager to rock out with her. Skye instantly brought energy to the stage as she opened the show with her “Skye Mix” of Fetty Wap’s smash single “Trap Queen”. Weaving in and out of both melodic and rhythmic/rap flavored vocals, she took the next couple of tracks to display her skills over hip-hop inspired original and cover tracks that incorporated heavy R&B melodies.

Although the venue experienced technical difficulties at one point, Skye took the opportunity to turn the perceived negative moment into a positive, and perform acapella for the first time at one of her live shows. She not only sang Happy Birthday to some of her lively fans, but also gave them an unexpected treat, taking it back to a song from her 2013 “Everyday Living EP” and performed a very compelling acapella rendition of “Hard Work”.

After a performance of the buzzing song “Scoot Ova” by the rising DMV R&B group 4EY “The Future”, Justine hit the stage to slow it down and sing a couple of songs from her upcoming EP release “Emotionally Unavailable”.  She started with the newly released single “A-Train”, and immediately went into an unreleased track in which the crowd participated in some call and response. On the chorus, Skye sings “You ain’t gotta worry about me baby”, in which the crowd responded “I’m Good…I’m Good”. Skye closed the show with her two biggest songs to date, as her fans not only danced, but sang along word for word to her DJ Mustard produced hit “Collide” and buzzing new radio single “Bandit”.