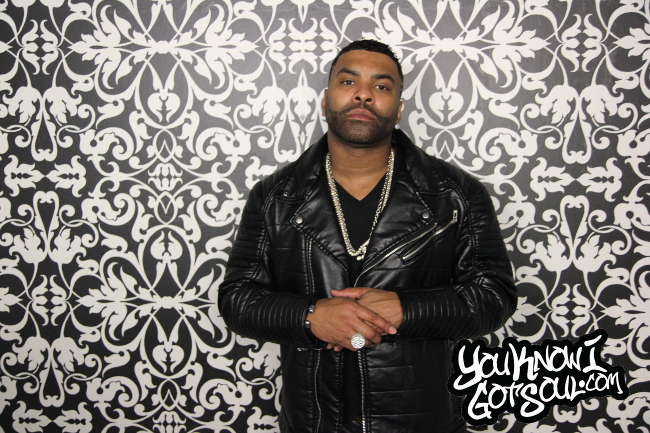 Unless you’re counting TGT’s “Three Kings” album, it’s actually been 5 years since we heard a solo album from Ginuwine. Some of that delay is due to him being on the road constantly to perform “Pony” everywhere he goes, but another factor has been Ginuwine trying to figure out his place in the landscape of R&B today. Ginuwine talks about the progress of his upcoming album “Same Ol’ G” as well his frustrations with the music industry right now. YouKnowIGotSoul also talks to Ginuwine about the 15th year anniversary of Ginuwine’s third album “The Life” and what he remembers about recording the project.

YouKnowIGotSoul: The last time we spoke, you were just in the beginning stages of your new album “Same Ol’ G”. Has there been any progress since then?

Ginuwine: A little more progress. I’ve opened up my own studio back at home. Now I’m able to sit there and create all day. I’m just starting again. I started it, but I didn’t really have any direction. I just wanted to get used to writing and all of that stuff again. We’re going to back on it at the top of the year.

YouKnowIGotSoul: Does music still excite you like it used to?

Ginuwine: No, not at all. What excites me is doing shows now. I don’t really get excitement from doing music because you never know what your music is going to bring. It seems like now it’s all for nothing. It’s more so of a platform to do other stuff which is cool, but back in the day we used to sell records. Now you’re only selling a fraction of what you used to sell, if you sell that. It’s like a fraction of a fraction.

YouKnowIGotSoul: Joe announced that the album that he just put out is going to be his last because he feels like no one cares anymore. Do you feel the same way?

Ginuwine: Absolutely, he’s been in the industry just as long as I have, if not longer, so he’s able to continue to tour on what he’s already done. People want to continue to hear those records, so that’s what I’ve been doing. When you’re in a position where we are, you don’t know where you fit in really. We’re just going to keep touring. In about two records, I’ll be done too because it’s really for nothing now. Radio is saturated with the same old stuff.

YouKnowIGotSoul: A lot of R&B artists focus so much on social media, but I’m not sure if your core audience has transitioned over to Twitter and Instagram. Some of them may still be listening to the radio, but there isn’t an outlet for R&B anymore, so do you think doing shows is the key to connecting with your fans?

Ginuwine: I think doing shows with other R&B artists like myself brings the attention to the crowd. You can’t just do those one artist shows anymore. I don’t like just me being on the show. I like me, 112, Dru Hill and Jagged Edge. Those are the shows people miss. Me and Joe have done stuff too. I think it’s just a different world right now. I believe artists are too focused on the younger crowd. Why would you want to focus on them? Let them do what they do. You continue to do what you do. I’m not going to listen to the hottest Hip Hop station in my city because that’s not where I’m at right now. I’m going to listen to the smooth jams of the 90’s and early 2000’s. That’s where I am and that’s where my audience is.

YouKnowIGotSoul: A couple of weeks ago you were touring in Kentucky with K-Ci & JoJo as well as Smokey and Black from Playa. That must have been fun right?

Ginuwine: That was a coming home surprise. I love those dudes. I came up with Devante and Jodeci, so it’s always a good thing to see those guys. It’s good performing with Black and Smokey too because we all came up around the same time.

YouKnowIGotSoul: This year is the 15th anniversary of your third album “The Life”. What do you remember about that album?

YouKnowIGotSoul: You’ve always mentioned that “The Bachelor” is your favorite album and “100% Ginuwine” is probably your best. What is “The Life” to you?

Ginuwine: “The Life” was really me coming of age and coming on my own. Everyone was saying that I needed Timbaland and I always feel like I need him, but I wanted to prove to myself that I could make a bigger record than “Pony” or just as big. That was “Differences” and I proved myself on that one. That’s what meant the most to me. I think you’re right though. It’s between “The Bachelor” and “100% Ginuwine” and I think it might be the first one because that’s what made me. You don’t alienate what made you. On the second album, it was me letting the world know that I was official. A lot of people can’t come back with the big song on their second record that’s just as big as their first. I did that with “None Of Ur Friends Business” and “So Anxious”.

YouKnowIGotSoul: You only had one song with Timbaland on “The Life”. Was that a scary time for you? You had a distinctive sound but you were working with different producers now.

Ginuwine: It was a little hard for me. Me and Tim weren’t friends at that time. Me and Aaliyah weren’t friends either. It was more so a separation with the business people that we were dealing with. it wasn’t us, but unfortunately we were just kids at the business. We listened and we didn’t really have an opinion of our own. We followed instead of leading. We ended up getting back together.

YouKnowIGotSoul: I feel like this album defined you as an artist and it’s probably your most personable album.

YouKnowIGotSoul: What do you remember about the song “Why Not Me”?

Ginuwine: I was trying to find my way into the music business still, but I didn’t want to portray something that I wasn’t. I really wanted to be just me, so I was like “Why not me?”. Then I made it about a girl, but it was sort of like the music business.

YouKnowIGotSoul: What about the lead single “There It Is”?

Ginuwine: It was a little disrespectful. *Laughs* It was for the guys as well. After that song, the guys were like “I didn’t like you before, but you’re alright now”.

Ginuwine: That was with my boy Raphael Saadiq, that was when the 2 way pager was coming out. I was sitting in the studio and I had it with me. I just went through it and wrote the song.

YouKnowIGotSoul: “Differences” which is arguably the biggest song of your career.

Ginuwine: That was for my then wife and my daughter Story.

YouKnowIGotSoul: “Tribute To a Woman” was a great song.

Ginuwine: I love that song. Everybody tells me about that song, especially the women. I just felt women needed a song like that. It was sort of like “Dear Mama” by 2Pac. When I made that one, I was really trying to get all of the power women like Oprah. It didn’t work out, but the thought was there because I was thinking about it.

YouKnowIGotSoul: What about “So Fine”?

Ginuwine: That was another one that I thought should have come out.

YouKnowIGotSoul: “Why Did You Go?” was our personal favorite.

Ginuwine: That one is self explanatory. I was talking about a girl that left.

YouKnowIGotSoul: What about “How Deep Is Your Love”?

Ginuwine: I wrote that in about 15 minutes. Me and Troy Oliver were really on a mission during that record. he was betting that I couldn’t write the song in 15 minutes and I did. I wrote “Differences” in 15 minutes too.

YouKnowIGotSoul: This is the one Timbaland record on the album which is “That’s How I Get Down” with Ludacris.

Ginuwine: I didn’t want to deviate from what people knew. Even though I was on my get back, I was like “I need you for a song”. I wrote it and then Ludacris wrote his part.

YouKnowIGotSoul: Was Ludacris your choice for the song?

Ginuwine: Yeah because you could actually hear his voice when you listened to the beat.

YouKnowIGotSoul: What about “The Show After the Show?”

Ginuwine: I was looking for something like the “Thong Song”. That’s one of the ones we did.

YouKnowIGotSoul: “Role Play” had a nice concept to it.

YouKnowIGotSoul: What about “Open Arms”?

Ginuwine: That was something I wanted to write and I wanted a crossover song. I wrote that one in 15 minutes too.

YouKnowIGotSoul: What about the Diane Warren record “Superhuman”?

Ginuwine: I wanted a big Pop movie type song, so I went to her.

YouKnowIGotSoul: “Two Reasons I Cry” must have been a hard song to write right?

Ginuwine: Absolutely. I wasn’t really able to finish it that night.

YouKnowIGotSoul: The last song is “Just Because”.

YouKnowIGotSoul: Do you think you could rate your discography?

Ginuwine: The later ones were 7 and below. The first four albums were 8 and higher.

YouKnowIGotSoul: I felt like “A Man’s Thoughts” was solid.

Ginuwine: Oh yeah, I liked that one. I usually don’t even listen to my stuff. I happened to listen to that one and I was like “That was alright!”.

YouKnowIGotSoul: That came at a time when you were gone for a minute.

Ginuwine: Yeah and then I came back with “Last Chance”. It was number one too, so that helped me.