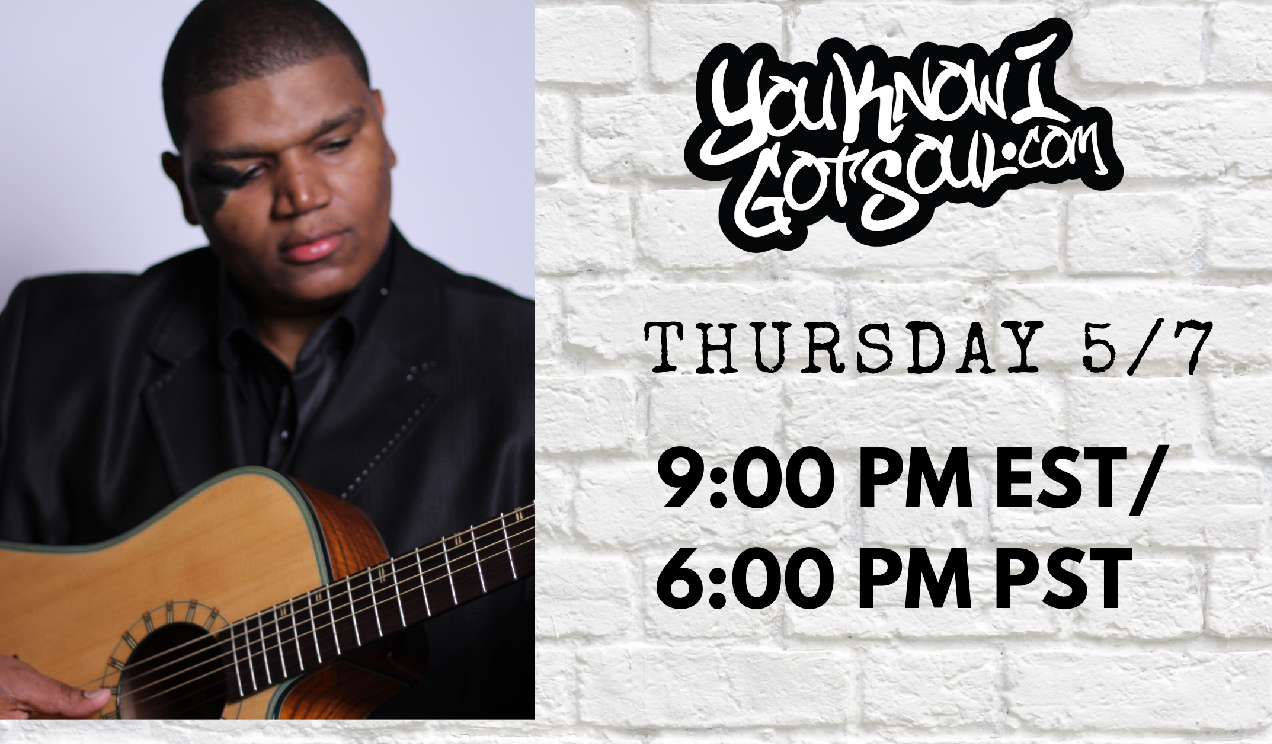 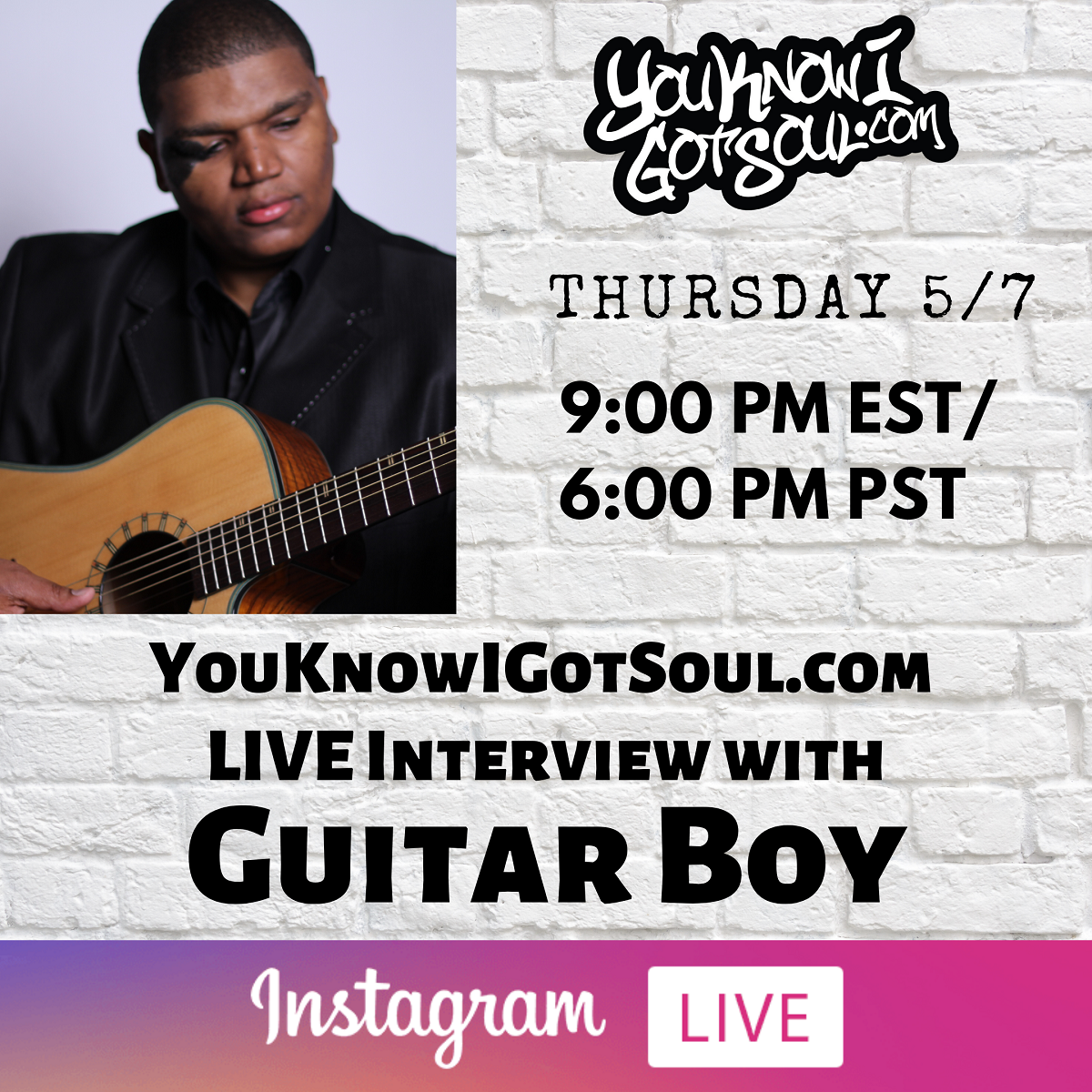 We recently caught up with producer Guitar Boy for an interview on Instagram Live. During our conversation, we talked about his work on a new 112 project, his beginnings working with R. Kelly, getting the opportunity to work with Trey Songz, co-producing with Danja, and what he’s currently working on.

YouKnowIGotSoul: Talk about some of the work you’ve been doing with 112.

Guitar Boy: We’ve been in during the quarantine working and grinding. I’ve actually been kidnapped at my boy Slim’s crib! *Laughs* He has a recording studio in his crib, so I’ve been working out of there. It’s just so incredible to be working with them. Just that legacy alone is incredible. I don’t take any of my blessings for granted, the call come from God. I try to keep him first in everything I do. Just to make sure people can feel it and just touch the world through music. Slim is just such an incredible vocalist. I’m used to working with singers who use auto tune. With him, I wouldn’t even put auto tune. I get spoiled when working with him. He’s such an incredible human being as well. Good energy, we vibe. Even on his last solo record, I was blessed to get three joints on there.

YouKnowIGotSoul: Let’s take it back to the beginning. You’ve been putting in work for many years. You started out working with R. Kelly? That’s an amazing story.

Guitar Boy: Even before R. Kelly, I started in the church, I was a church musician. I learned to play drums, organ, piano, guitar, bass, whatever it was. So I started doing studio sessions from there. But after college and grad school, I moved to Chicago, and it went right back to church. How I met R. Kelly was on a basketball court. He asked me if I knew how to play the box, and what he meant by box was acoustic. I told him I could do it. He invited me to the studio and there were kids running around. It turned out it was B2K! They were little kids running around at the time. Tyrese was there, so it was really amazing. He had just finished making “The Best of Both Worlds” with Jay-Z. I came in on the back end of that.

YouKnowIGotSoul: You eventually worked on his “TP-3 Reloaded” album right?

Guitar Boy: Yea, so that came out after I was there for two years. He worked on it right after “TP-2”. He went on tour right after that album and there was a hiatus. So actually my first record I got placed was with Twista and Do or Die called “Hit Til the Morning”. I was just in the studio and R. Kelly said to just have fun. I played around on the track. They were recording everything. I was excited. So it all started from that.

YouKnowIGotSoul: What was your role when working with R. Kelly? We all know him as a creative genius.

Guitar Boy: When I first got there, I was the new kid on the block. Kendall was already there, and he was the spear head of “TP-2”. Me and him used to play at church together. At that time we had cassette tapes and a dictaphone. We’d record ideas and take them to the studio. It was both ways. R. Kelly would come in and hum the ideas, but he loved the guitar. A lot of the ideas would start at the guitar. Shout out to Donnie Lyle, he was already his musical director when I was there. When you’re new, you don’t want to step on toes. So R. Kelly would sneak me there at night, I would come into the studio, and lay parts down. So that when Donnie came back, he would wonder who it was. R. Kelly had me replacing parts of songs. After Donnie got to know me, he saw I was genuine and ready to work. So we became good friends. R. Kelly would spearhead a lot of ideas. We’d all get into the studio and it was almost like church rehearsal, just get in there and gig, vibe out on some vibes. The engineer would record everything. R. Kelly would just start humming something and we’d vibe to the melody of what he was doing. Then he’d just leave and we’d be working. When he’d come back, we’d have laid the verse and hook. We’re all from the church, so that’s why a lot of the production sounded like church music.

YouKnowIGotSoul: Give us a moment when you witnessed R. Kelly’s genius.

Guitar Boy: I remember working on “TP-3”. I had just did a record called “Remote Control”. They were playing me the record, and I thought it sounded incredible. I built up the track, and I didn’t hear it until after he laid his vocals. He let me lead the way on that song. It was incredible. I came back to the studio and I saw him dress almost like a character, and that’s where “Trapped in the Closet” started. He was these different characters in the room. It was incredible. That turned into a whole movement. So that was my experience of seeing that come into play and turn into a movie. He got into characters and played those parts.

YouKnowIGotSoul: After R. Kelly, you linked up with Trey Songz. Take us to that.

Guitar Boy: Yea so this was around 2008 when I left the Chocolate Factory. I kinda wanted to branch off on my own, it was some differences we were having. I felt like it was time to move on to become the producer that I’m learning to become. I wanted more creative control. I decided to take a leap of faith and start my own thing. When I left the Chocolate Factory, I got a placement with Jennifer Hudson. I had already met a bunch of producers. I remember meeting Polow Da Don and we did the remix of Ciara’s “Promise”. Moving to Atlanta was a faith move. When me and my manager got here, we hit the ground running. I met Troy Taylor, who had been working with Trey Songz. I called him and went over to his crib. I came in and played some tracks. It just sparked a whole relationship. Troy Taylor is my brother for life, he opened the door for me. That’s how we created the songs for Trey Songz: “Neighbors Know My Name”, “Panty Droppa”, “Yo Side of the Bed”.

YouKnowIGotSoul: We’re just celebrating the fact that Trey’s “Anticipation” mixtape finally hit streaming services. You did “It Would Be You” and “Yo Side of the Bed”. What do you remember about creating those?

Guitar Boy: That was incredible. “It Would Be You”, after I built the track, I’d come back to the studio, and Trey had actually recorded himself. They don’t even need an engineer. It was like a movie. Every day we’d create a track and I’d come back the next day and the song was written. When he played me the record, I said “Wow!” Same with “Yo Side of the Bed”. It really turned from a mixtape that helped launched the album “Ready”. That’s how that came about, from that mixtape. I don’t think we would have had a “Ready” album if it wasn’t for “Anticipation”.

YouKnowIGotSoul: What kind of doors did working with Trey Songz open for you as a producer?

Guitar Boy: Oh man. Shout out to Troy Taylor, he showed me a lot of love on that album. That album opened up doors to where I got signed to Warner Bros. That was a big thing for me. I flied back to L.A. to close the deal and it opened up to what we have today. Just meeting so many people. I’ve been blessed to be with them for the last 10 years.

YouKnowIGotSoul: You do a lot of co-production as well. What is that like?

Guitar Boy: I think it all comes back from “The Chocolate Factory”. That’s how I worked a lot, with just bouncing off ideas. In the room there is no ego, we are there to do one thing, make a single and a hit song. A lot of the guys I’ve worked with recently are not producers, they are beat makers, so they don’t know melody or how to play an instrument. When you are in a studio and an artist says play something from scratch, you can’t sit there and bang on drums. You need to grab an instrument. I was just used to taking that lead role with the guitar and coming up with the chords and progressions of the song. If not, going to the piano and playing some melodies. The writer or artist themselves would hum lyrics from there. Once you get a hit song, everybody wants to take lead, it’s about ego. But it’s really about to be able to work together and put your ego to the side. At the end of the day, I don’t care who you are making a track for, if the artist doesn’t pick the track, you have nothing.

YouKnowIGotSoul: You’ve done some amazing work with Danja, on artists like Keisha Cole, K. Michelle and Luke James. They are futuristic types of records with an R&B feel.

Guitar Boy: I met Danja through Polow, when they were down in Miami working on Monica and Bando Jonez albums, back in 2014. Working with Danja, this dude is incredible. He made me step my drum game up. My most incredible moment is when we worked with Britney Spears, at Tito Jackson’s house. We did some incredible vibes there.

YouKnowIGotSoul: Tell us about what you currently have going on.

YouKnowIGotSoul: What advice do you have for upcoming producers who don’t land placements right away?

Guitar Boy: I’d say first you have to love what you do, and be patient. It’s not easy, if it was, everyone could do it. The main thing is to stay humble and stay true to your character. Don’t try to be someone you’re not. That’s the worst thing someone can do. All of the accomplishments mean nothing if you have a bad spirit. The artists feel that in the studio. A lot of the records I’ve been blessed to be a part of is by being a good person. A lot of the artists I work with I become good friends with. I try to establish good relationships with artists.