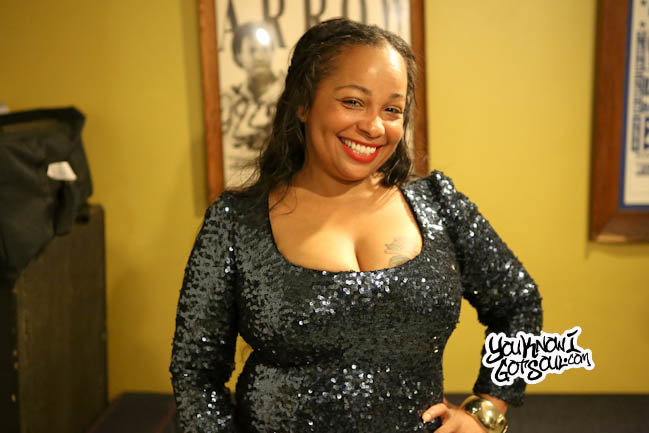 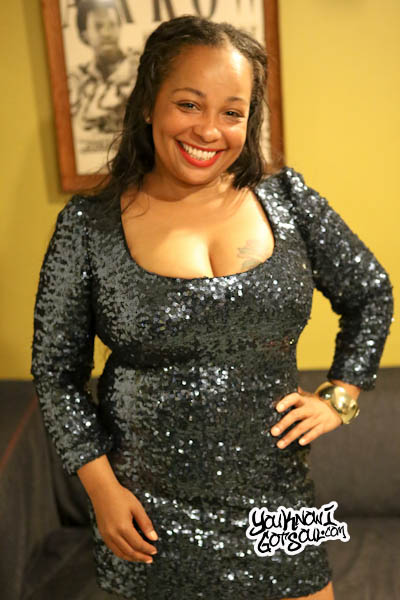 We were honored to have Indira Khan, daughter of the legendary Chaka Khan, grace the stage during our last month’s Sol Village. It’s not fair to compare the two because Indira has clearly carved out her own unique sound and is truly talented with her booming vocals. We sat down with her that night folllowing the performance and discussed the influence of her mother, her new music, upcoming album, influences, and more.

YouKnowIGotSoul: Talk about where you developed that talent for singing from an early age.

Indira Khan: Basically it was by accident. Singing was mostly a hobby for me when I was younger. I stood in for one of the girls in the group Pretty In Pink. From there on, the rest is history. I saw the response I got from the crowd and it was exciting. I began my love for singing and here I am today.

YouKnowIGotSoul: Talk about your situation with Pretty In Pink. How was it like being part of that?

Indira Khan: It was a great experience and I learned a lot. It took me to where I am today. It was wonderful. It was me being part of a group and I think everyone should experience the camaraderie and people having your back. It was really great to be in Pretty In Pink. I have wonderful fond memories.

YouKnowIGotSoul: Do you prefer being in a group or as a solo artist?

Indira Khan: It’s easier to be a solo artist because for obvious reasons. You only have to deal with yourself mostly but I do at times miss somebody having my back and that same set of people. It’s like a family, so me traveling and working alone versus me traveling and working with my family, I absolutely do miss that and sometimes it’s a preference. But it is much easier to be a solo artist.

YouKnowIGotSoul: Talk about the some of the recent music you’ve released like “Bathe Me” and “Lonely”. What inspired those songs?

Indira Khan: “Bathe Me” was a love song. I mostly write about things that are going on in my life. I had just met someone and that’s how I felt. I just felt like I was intrigued by them and I wanted to be submerged in who they were and learn more. I was excited and wanted to just be surrounded by that person and what they were about. That was my inspiration. With “Lonely”, I was actually working in Copenhagen and I was by myself. I was missing my family and my children. I just wrote that song like “I’d do anything to be with these people right now”.

YouKnowIGotSoul: Do you feel like it is added pressure to live up to your mother’s legacy?

Indira Khan: It is pressure. I believe it gets easier to handle. The older I get and the more I discover who I am as an artist and become strong in that, I do feel the pressure at times but the more I do this, the easier it is to handle.

YouKnowIGotSoul: How did your mother Chaka Khan’s music influence you?

Indira Khan: At first, that was my least favorite artist because I heard her so much around the house. I was like “If I hear that woman sing again, I’m going to pull my hair out”. It wasn’t until I got much older and became a mother myself that I began to understand her as an artist and then appreciate her separate from being my mother and be able to listen to her with new ears and listen to her lyrics and just get into her as an artist and not her as my mother singing loudly around the house all the time.

YouKnowIGotSoul: Do you have like you have the upper hand over most artists because your mother is a legend?

Indira Khan: Absolutely not. We’re all even yet unique. I don’t do the comparison thing because for me, I would stop singing if I started comparing myself to everyone I hear. I just try to look at it as “They have their thing and I have my thing”. I don’t see it as competitive but at the same time, it’s getting better and better. It’s exciting for me to see the evolution of music.

Indira Khan: Prince all day. I love a lot of Rock music like the Foo Fighters. I love every kind of music. My biggest inspiration is Prince and that’s because he was such a versatile artist.

YouKnowIGotSoul: What’s coming next for you?

Indira Khan: We’re working on an LP. I’m praying that everything will be finished by this summer. It’s just going to be good music. If you can’t tell, I hate to be put in a box but I’m going to try to tell you in words what you can be expecting. I think it’s just music with integrity and I think that’s the politically correct answer.

YouKnowIGotSoul: What are your biggest goals and what are you looking to accomplish with your music?

Indira Khan: I’m just trying to keep dong music. I don’t want to be a millionaire. I would love to work with Price. That would be awesome. I just want to keep doing what I do. It’s a daily struggle and hustle.