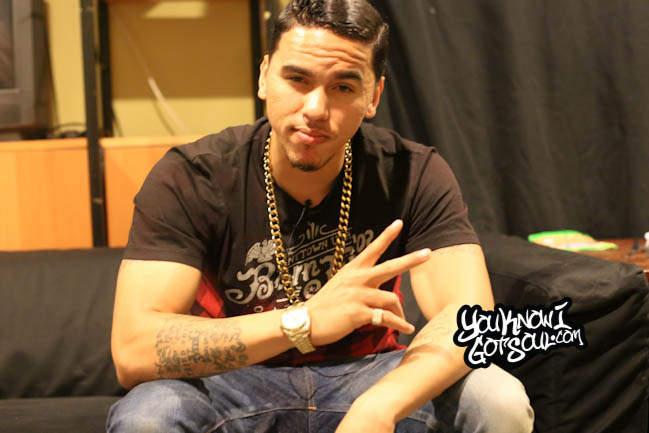 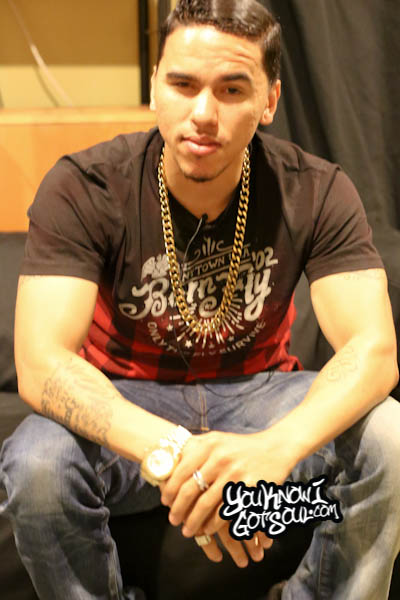 As one of the leaders of the new generation of r&b, watching the growth in Adrian Marcel’s music is definitely exciting. Raphael Saadiq certainly knew what he was doing when he hand picked him as his protege a couple of years ago. When Adrian released his “Weak After Next” mixtape recently we were really impressed with the quality of the music and how much of a step he’d taken from his first mixtape “7 Days of Weak”. The talent is there, and the potential is starting to generate results. It excites us to be able to get behind new artists like Adrian Marcel on the ground floor and help support them on their path to stardom. YouKnowIGotSoul sat down with Adrian before a recent performance in NYC and discussed the growth between his mixtapes, Raphael Saadiq’s involvement in his music creation, his upcoming EP and album, and much more.

YouKnowIGotSoul: Let’s start talking about the “Weak After Next” mixtape you released a few months back. What really stood out was the growth you’ve experienced since “7 Days of Weak”. Talk about that growth.

Adrian Marcel: It was a lot of growth that happened between them. “7 Days of Weak” I put out in early 2013. It the first project I released since my first single and I think that’s where a lot of my fan base grew from. Coming into “Weak After Next”, I was just in a different place. I didn’t want it to be the same as “7 Days of Weak”. I didn’t want it to be compared in a lot of ways. I think in the beginning people didn’t understand that. “Weak After Next” was more of where I am right now and what I’m going through and kinda setting you up for the next. Everything I do is about setting up for the next. I think that my confidence and belief in myself as well as the music and trusting my judgment of my songs really grew the most.

YouKnowIGotSoul: I really noticed how much of a cohesive project this was from the production to the vocals to the writing. When you approached this creatively, how did you feel it was different this time around?

Adrian Marcel: The last time around we had already had a lot of the songs done and worked on. It was all about picking the right ones and putting it in the order that could vibe. A lot of people said that they didn’t have to change a song and I think that had a lot to do with the order. With “Weak After Next” it was a very different process. We had to redo the whole mixtape because I didn’t want it be like “7 Days of Weak”. So we went in top of the year and started writing it and just re-did the whole thing. It just went from “Let’s talk about exactly what I’m going through right now” and that’s what people needed to know. To me, that’s the only way I could have separated the two. We had a whole bunch of songs I could have easily put on there and it could have been the same thing, but it wouldn’t have shown growth. I think that people needed to see a different side and understand that there’s many sides. As we keep going and growing, you’ll see them and find more.

YouKnowIGotSoul: You’re known as the protégé of Raphael Saadiq. How involved is he in the creation of your music?

YouKnowIGotSoul: He’s right there with you?

Adrian Marcel: Nah, he doesn’t have to be right there with me all the time. Ray is the type of voice that comes in right on time. Out of respect, I don’t make a lot of moves until I holla at Ray just for his advice and his expertise. He’s a legend that’s been around for so long and he’s still going strong. He’s still very relevant to my generation and the generation before me. When I do stuff, it’s out of some of the lessons that I’ve learned from him and working with him. I think that Ray trusts what I do and he understands that it’s an equal passion and I take it seriously. When you have somebody who takes their craft seriously, you don’t have to babysit them and be there all the time.

YouKnowIGotSoul: Talk to us about your current single “2 AM”. I noticed that the song has more of a commercial feel than the rest of the mixtape. Was that your intention?

Adrian Marcel: You know what, it definitely was a little intentional. I think that we as artists get caught up in everything that we want to do and we like. I’m very soulful, and my music is very emotional, but we have to remember that there’s a mass of people that have to hear this. There are people who don’t know “7 Days of Weak” or “Weak After Next”, they just know what the radio plays. So you have to have that commercial radio record. Again for me, I never put myself in a box. I like to have various different types of songs and different genres and situational songs. No matter is going on, I have something for that time or era. Even with that, I’m one of the artists that even though I love my soulful stuff, I love to turn up and have a good time and that’s another side of me. As long as it doesn’t veer away from who I am, I’m down with it.

YouKnowIGotSoul: You’ve been really growing as an artist and your movement is growing. You’ve been doing a lot of shows lately. One thing about your live show is how well you command the stage and have so much presence. Talk about growing as a performer.

Adrian Marcel: Oh my gosh, every show it kinda feels like there is a new muscle being built. It’s like working out. You train and train and train and you start off not being able to lift 25 pounds, but you keep going from 25 to 35 to 45. It’s all about building your strength. Every time I hit the stage I try to take something from it. There are a lot of shows and opportunities to be seen like that. I like to just take all of them and allow them to help me build.

YouKnowIGotSoul: When listening to your mixtapes, it feels like these are personal situations that you’ve been through. Is that mostly where your writing comes from?

Adrian Marcel: Absolutely. I don’t like to veer away from the truth because I think that’s what people have fallen in love with about my music. It’s honest. I can’t portray to you something that I’ve never been through or something I didn’t watch someone close to me go through. It’s the best way for people to get to me know. That’s what it’s about. Your fan base wants to be close and feel like they take something from you every chance that they get. With this, it’s no different. I think that I work hard to make my music as a diary for new generations who find out about it years later. They can go through the history and see a trail. It’s straight and narrow, you can see the growth and understand that I’m not afraid to give you honesty and be honest about anything that has to do with my story.

YouKnowIGotSoul: What can we expect next from you?

Adrian Marcel: Now we’ve got an EP that’s going to drop, it’s the last installment to the “Weak” series. We’re looking at calling it “The Last Damn Weak”. It’s a few different meanings for that. That’s in a few months we’re going to put that out. It will be a few records that will for sure represent the album “G.M.F.U” that we’re looking out for top of the year next year. A lot of work and a lot more shows, just keep up.

Adrian Marcel: Thank you for having me and everybody who’s watching and supports. It’s been a lot of grind and hard work, but it’s all worth it because I see you guys constantly growing with me and supporting. I appreciate you guys.