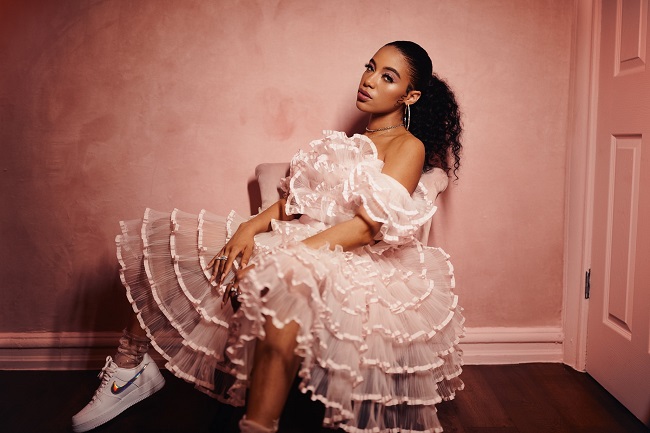 Emerging R&B artist Ayanis caught our ears when she sampled Next’s classic song “Too Close” on her song “Wait A Minute” back in 2018. Since then she’s continued to bring the nostalgic vibes as she most recently sampled Pretty Ricky’s “On The Hotline” for her smooth song “Ectasy”. We talk to the Island Prolific/ Atlantic signed artist about her love for 90’s R&B, her brand new EP “YANI” as well as her R&Bop sound.

YouKnowIGotSoul: Talk about some R&B albums that helped you define your sound.

Ayanis: Definitely Michael Jackson’s “Bad” because my parents played that a lot in the house when I was growing up. They also played Janet Jackson’s “Control”. My dad played a lot of Joe and my sister played Destiny’s Child and TLC. I listened to Aaliyah as well. Those are just a few that shaped the sound of me and what I like.

YouKnowIGotSoul: Your new EP “YANI” showcased a lot of growth from your debut “Direction”. Talk about creating this project.

Ayanis: I took my time on it. I made sure to take time on it so that everybody could hear the growth. I think going into “YANI”, my mindset was to outdo my first project, but it wasn’t so much that. It was also me trying to grow as a person. That was reflected in my music because my first project “Direction” was me trying to figure out what I wanted to say, but “YANI” puts a stamp on who I am. I can be sexy, I can have fun and I can have swag. This project defined me because I was able to identify myself with the music.

YouKnowIGotSoul: When I look back at your debut EP and especially your song “Wait A Minute”. we thought that was an instant smash. That song unfortunately didn’t take off like we thought it would. Talk about being patient and understanding that success may not come right away.

Ayanis: As an artist you have to be patient with yourself. You have to because if you’re not, you’re going to rush the process. Something that’s great is going to take time. I’m super proud of my first project. I believe whatever song or project ignites the rest of them, people are going to enjoy that music. I know it’s all a process and progress is part of it. As I’m putting out more music, I’m gaining new supporters. I think timing is everything because I’m in it for longevity. I imagine myself to have this big career and I’ve always had that thought since I was little. I know it takes time and patience. It’s all part of the process and putting in the work. People are going to catch on if you have something great and I believe I have something great.

YouKnowIGotSoul: Talk about the new single “Ectasy” which samples Pretty Ricky record “On The Hotline”.

Ayanis: The producer Herothaproducer did an amazing job of flipping the sample. My generation grew up on Pretty Ricky, so it was only right that I paid homage and respect to the people that came before me. I used to go to parties and they used to play Pretty Ricky. I always try to find the beautiful balance of making something familiar but not the same. When we heard the sample and it was flipped, we were like “We’re going to put our own spin on it”. It’s like the 2020 version of it. I love “Ectasy” because it just feels really good. It doesn’t matter where you are or who you’re with, the record just feels good.

YouKnowIGotSoul: You had a chance to speak to Pleasure P about that record too right?

Ayanis: I did! We got to be on IG Live and that was such a surreal feeling. When you listen to someone growing up and you’re on IG Live with him, it’s so dope and he was super cool. He knew about my show and I was like “For real?!”.

YouKnowIGotSoul: You also sampled “Make It Hot” by Nicole Wray on the record “One Night”. How do you balance your love for 90’s R&B and also what’s going on right now?

Ayanis: I pay attention to what’s going on. I have to stay true to myself. I have my foundation with 90’s and 2000’s R&B, but I also like to dance so I pay attention to the culture. You just find that balance naturally. I follow a lot of dance pages and different avenues of people making TikToks, I just pay attention. I also know what I like and what my friends like. I think about the songs that we listen to when I’m with my homegirls in the car. That’s why I have songs like “Gumbo”. That’s a very fun song and you need those. I also have a song called “Flex” which is me being very confident and I’m just talking my shit. *Laughs* I call my music R&Bop.

YouKnowIGotSoul: During your creative process when you’re writing music, are you thinking about the choreography early on? You’re always dancing in your music videos.

Ayanis: Yes, I’m so glad you asked that. That’s how I know I love a record because I come out of the booth and I start making dance moves to it or I start visualizing the video. If I can groove to the song, that’s when I know I have something special. I have a full eight count in my head and it’s just a feeling attached to the records that I can’t describe.

Ayanis: I love the bounce and the skating rink vibe. I can see family members getting together at a function jamming to it. The whole point of the remix was to get a male’s perspective. I came out with the record initially with Queen Naija and it was so much female empowerment and I love that. All the guys were like “We can talk big talk!” so I was like “Let me get a male perspective” on it. Jack was perfect on the song. I knew that was the type of beat he would get on and do his thing. That song feels really good.

YouKnowIGotSoul: There are a lot of female R&B things on the scene right now. What do you think will make you standout?

Ayanis: Shout out to everyone doing their thing. For me, what is going to make me standout is that my music has personality and layers. I have a sound that I have defined as R&Bop, so a lot of the production that I choose is not low tempo. I choose mid and uptempos. I’m not afraid to experiment and I feel like that will help me in the long run. I think my music will standout because of the life I bring to it. The music makes you want to dance and it’s refreshing. It’s going to take time for people to understand, but when they do, it’s going to be crazy. *Laughs*

YouKnowIGotSoul: With what you’re trying to do right now with your music, who are some producers you would like to work with? I think you would go well with Rodney Jerkins and Pharrell.

Ayanis: I’m on Atlantic Record’s Christmas project. I have the song “Santa Baby” on there. Along with that, I’m working on new music. I just finished a song with Ne-Yo and I think people are going to love it. Ne-Yo is incredible and he’s someone I’ve wanted to work with.