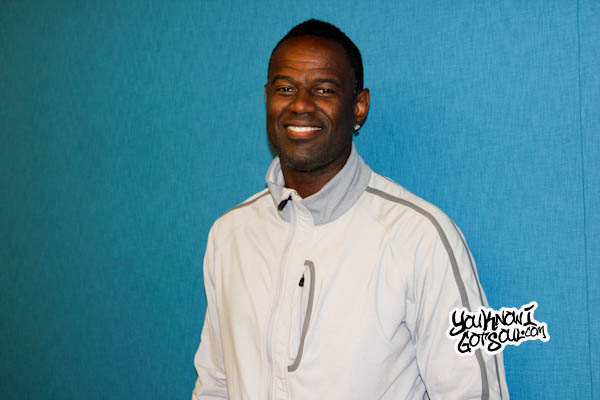 When you think of the career of Brian McKnight, some words to describe it may come to mind such as: timeless, classic, legendary. Although he’s never stopped making quality music over the years, he’s unfortunately suffered the same fate as many r&b acts from his era and been shunned by mainstream radio and TV. That’s never prevented Brian from continuing to create good music and in fact has helped to progress his sound over the past few albums. As an independent artist, he’s always going to have creative control over his music, and judging by the results, he knows exactly what to do with it. His 15th album “More Than Words” is in stores now and represents a milestone in longevity that few can claim. YouKnowIGotSoul sat down with Brian McKnight and discussed the approach on his new album, frustrations with not being in the mainstream spotlight like the past, progression with his sound, how his kids are helping him be creative, and much more.

YouKnowIGotSoul: The new album “More Than Words” is out now. This is your 15th album now. Did you approach this album any differently than your previous ones?

Brian McKnight: I think that if there’s a difference, the songwriting will always be the same, but this album is just a little faster than all of the other ones and a little more fun. *Laugh* I think with each record, the content can be judged by where I’m at in my life at that time. I’m in a really good place right now and this album is more fun! *Laughs*

YouKnowIGotSoul: On this album I heard some more progressive sounds mixed with the classic Brian McKnight. Is that what you were going for?

Brian McKnight: Yea, you know a couple of years ago we went to music in a box basically. We went to Pro Tools and Logic and tried to sort of mix the live stuff that I do with the canned musical thing that’s happened today. Trying to be on the cutting edge but still beckon to an earlier time. I think the last couple of albums I’ve been trying to figure out the balance. I think on this particular album I’ve got it right. So there was some experimentation earlier. *Laughs*

YouKnowIGotSoul: Now that you’re over 20 years in the industry and 15 albums in, what inspires you at this point?

Brian McKnight: Life. I live my life and pretty much every song is personal. The first CD, I was 19 when I wrote and I hadn’t really done anything, so there was a lot of imitating other songs on that. It’s interesting because people are now like “I can’t even listen to your first album!” *Laughs* It’s not that it’s not good, but our ears have been acutely tuned to today’s technology and in 1992, they didn’t have the greatest technology even though it was the greatest we had heard at the time. I just live life and write and whatever comes out will come out.

YouKnowIGotSoul: Talk about the motivation behind the emotional song “How Much You Mean To Me”.

Brian McKnight: I wanted to set out to write out a song that would encapture the feeling of losing people. I don’t know if you can get the right time to say goodbye to somebody because you can’t. Most of the time, you don’t know when they’re going to go. When I had seen Whitney Houston at the party for the Grammy’s two days before she passed after not having seen her in not so long and being so happy to see her in such a great place, to have gotten the notification that she was gone, I don’t think I had even mourned Michael Jackson yet until that moment. Then I started making a list of people for the video and it was virtually endless. The other night was actually the first time I sung the song and watched the video and I felt all of that coming back. Along with my grandparents and my buddy who lost half of his family in a car wreck, we could all try to speculate as to why, but I just think that we’re missing, as a music industry, a call to champion. I think Marvin Gaye in the 60’s with “What’s Going On?”, there were so many other things to talk about except partying, getting drunk and having sex. There’s still a place for that, but after I sang that song on the stage and saw what the audience did that people need something more than just that. I mean there’s a place for that. When I go to the club, I don’t want to hear that song. *Laughs* But I think that’s another reason why music sales aren’t necessarily what they could be because some of that heart and soul is missing. It was great to see that response and it was actually great to feel something for a change.

Brian McKnight: Well let’s be frank, I’ve always had creative control. *Laughs* Where the control sort of dissipates on all the fronts is what happens after you deliver the album. Once you deliver it, you just don’t know whether you’re independent or label. The landscape of music has changed so much that you almost have to change your way of thinking. Whereas fifteen years ago, I can remember stories of people being mad about what the label did and they went up to the label and trashed the office. Now it’s just like “I’ll put this out”. It’s actually more of a promotional tool. I don’t want to say that at the label because I’m sure they’re trying to make a lot of money with this, but as the artist and the creator of this content, I have to look at it as “I have something new and something to talk about to get more people.” I hope they spend $10 to buy it, but at this point in my career I’m more concerned about the $50-250 that they’ll spend to come and see me. It’s funny because the girl downstairs was like “I haven’t seen you do anything since The Apprentice!” and I was like “Well have you been looking for me?” They’re not because the radio doesn’t play the music I do anymore. There’s very few places for them to stumble upon you, so you have to do social media and you have to write songs about vaginas to get people to think about you and then steer them some place else. To answer your question, I really don’t know. I just do what I do and you just let it fall where it falls. Between my team and the label, we can get some traction.

YouKnowIGotSoul: Is it ever frustrating for you as an artist to not be in the spotlight like you were back in the day and the sales aren’t what they used to be?

Brian McKnight: It would be if it was only happening to me, but it’s industry wide. I can be frustrated because music isn’t what it used to be. It would be fine if people still sold the same with this music that everybody loves. I mean Justin Timberlake sold a million but that’s an anomaly. If everything was still the same from an economic standpoint then I would say “I’m in my 40’s, it happens to everyone.” I’m not concerned about myself. I’m concerned about that kid out there who really wants to do something and can’t because he has to go sing with a DJ and even that’s not going to get him where he ultimately wants to go. That’s the frustration. For me, I think I can continue to sing these same songs for years and people will still come and hear them. It would be great if people still revered music the way they used to and they still bought music they used to.

YouKnowIGotSoul: Your sons are also musicians and you have collaborated with them the last few albums. How do they inspire you musically?

Brian McKnight: My children have a different approach. They have the same musicality, but they also listen to everything that’s now and current because they’re young. They also have the benefit of growing up in the house with me to listen to the classics as well. They have a much more well rounded musical sensibility than I do because when I’m not creating music, I’m not listening to it. *Laughs* I’m on the golf course. They’re basically my eyes and ears to keep the sonic sound of what I do as current as possible. At the home studio, they make sure that we can compete in the world of electronica because I have no idea. I was a computer science major and I have no idea what’s going on. I’m just like “Fix it just so I can just do it. I don’t want to fiddle with this or that.” If it weren’t for them, I don’t know where I would be.

YouKnowIGotSoul: You’re now on your 15th album and that’s a lot. Do you see yourself slowing down or are you going to keep on going?

Brian McKnight: I think we’ve talked about how we could better serve the amount of music that I create. I think we all know the demise of the labels as they are is pretty imminent and on the horizon. I think that the power of your own music has to be in your own hands. I was actually going to do that with this album. I think to be completely independent is what the next step is going to be. If you’re going to get it, why not get it straight from me because the avenues now are so clear and there. So why not?

YouKnowIGotSoul: I was reading that “Anytime” wasn’t originally released as a single. How did that whole release go?

Brian McKnight: It’s interesting because at that time the people who worked at Motown between promotion and the people who were up at the top was the best people we’ve ever had. They had some ideas that at the time as the songwriter didn’t make sense to me. It was like “Why do I need to get with Puffy and Mase?” It was particularly to get MTV. Without MTV, “Anytime” doesn’t become what it becomes because “You Should Be Mine” didn’t sell us any records, but it immediately got me on camera with Puff and Mase and on MTV, which then put “Anytime” on MTV and then we started doing 60k a week. That was the actual plan from the very beginning. It wasn’t my time, but what it really did was when “Back At One” came, it was a no-brainer for VH1 and MTV to be all over that. At that time it wasn’t like I could say “No!”. I’m the kind of that guy who is like “If your idea is the best then we’re going to go with that. If it doesn’t work then it’s your fault!” But I couldn’t because it worked. *Laughs* The beginning sucked though.

Brian McKnight: I want to thank you. The fact that people still want to talk to me and see me is pretty awesome.