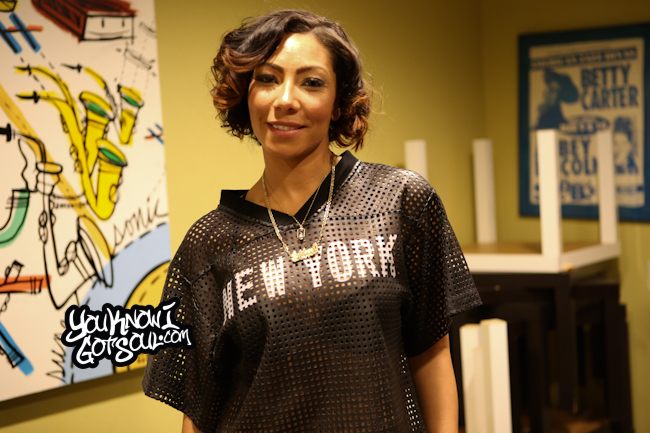 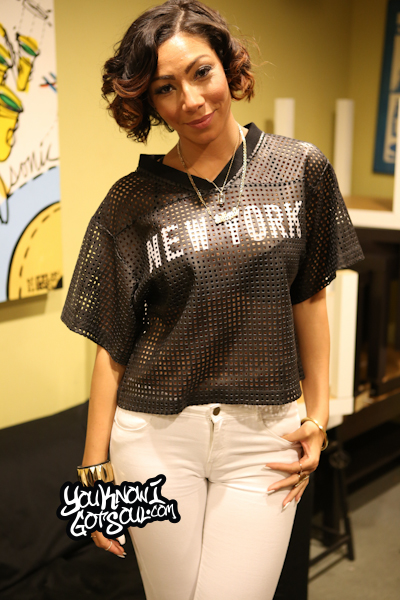 When Bridget Kelly made her departure from Roc Nation, the label she’d been with for 6 years, many wondered what the future held for her. However, judging by the success she’s having on TV and happiness she has being an indie artist, she’s going to be just fine. Despite not having her debut album release yet, Roc Nation gave her priceless exposure and allowed her to build a loyal fan base that will ride with her into this next chapter. With a new found freedom to create the music in her heart, we’re excited to see Bridget Kelly finally live up to musical potential we know she can. YouKnowIGotSoul sat down with her prior to a recent performance in NYC and discussed the progress of her debut album, her departure from Roc Nation, being independent, lessons learned, and much more.

YouKnowIGotSoul: Talk about the progress of your debut album.

Bridget Kelly: Honestly, this is the first time I’m really giving my all to my album. I’ve started and stopped a lot in the last 5 years as I’m sure my fans have seen. Not to say the prior projects were necessarily me, but I think I’m in a different head space. So to have complete creative control over what I’m doing now is really incredible. It’s very liberating.

YouKnowIGotSoul: With the success you’ve had hosting on TV, has that made you more patient with putting out music? Is music still the main focus?

Bridget Kelly: Music has always been the focus. I think hosting on TV is a platform to promote my music when the time comes. I think nowadays it’s really difficult for people that don’t really know you, to find you. As we know, everything is on YouTube and the market is over saturated and it’s very rare people will just stumble upon you. I’m happy that I have enough personality to be on TV and be able to host and kind of converse with people and sort of set the bar pretty high for what my brand is and who I am as an artist.

YouKnowIGotSoul: Talk about leaving Roc Nation. Did you consider it to be a setback for your career?

Bridget Kelly: Leaving Roc Nation was scary at first. I think it’s like a breakup. I was with them for 6 years. I was the first artist they signed. To leave that situation behind was bittersweet. I think for me at least, I’m very happy that I have those relationships today. I’m still able to reach out to those guys today if I need anything or have any questions. Even if I need professional or personal advice, I still have a direct line to them. That’s more important than anything else. They’re happy for me, they wish me nothing but luck and success. It’s great to have their blessing.

YouKnowIGotSoul: In the past we’ve heard your music touch on many genres, including pop, rock, soul hip hop and r&b. What is your direction sonically going forward?

Bridget Kelly: I think it’s very soulful, I can’t leave that behind, that’s my voice and the nature of my tone and really all of my inspiration comes from; which is love. I think r&b has taken on a lot of different faces. I’m kind of lucky to be making the kind of music I’m making now because it’s at the fore front. R&B is back to being popular music and I that’s really great for me. Sonically it’s not that far off. It’s still r&b but it’s pop as well. I think r&b is pop, so I’ll call it pop now.

YouKnowIGotSoul: After leaving Roc Nation, are you looking to sign another major label deal or stay independent?

Bridget Kelly: I don’t really have a preference. I’ve been independent now for almost a year and I think that it’s allowed me to spread my wings and do some more self discovery. Some is voluntary and some is really terrifying and I feel I’ve been forced into some changes! *Laughs* It’s also helped me sift through the garbage and see the forest through the trees. I think a lot of politics that were played early on put certain people in my life and as soon as I left that situation, I could totally see who was riding for me because they liked me and my music and my artistry, and then people who were just riding the wave. It was a blessing but I think overall being independent or being signed to a major, it just has to do with how you play your cards. I think now I know better so either option for me, being who I am and where I am now, would work out fine.

YouKnowIGotSoul: You’ve released a couple of EP’s over the years, including “Cut to…Bridget Kelly” in 2013. How hard has it been keeping your fans waiting who have been anticipating the debut album?

Bridget Kelly: Well “Cut to…Bridget Kelly” was kinda thrown out there which was really upsetting to me because I was on the USO tour at the time it was released so I didn’t have any control or power over how it was promoted or marketed. So it didn’t reach the height I thought it would. Unfortunately I wasn’t able to perform as much as I could have. I didn’t have a band I was working with at the time, I didn’t have any tour support to take the songs on the road. Within a few months I had parted ways with the label. I felt bad because I thought it was a really incredible body of work so to not have been able to push it and promote it adequately kind of set me back. Now that I have such an incredible catalog of new songs, I’m hoping that new fans will gravitate towards it and be attracted as well as the old ones.

YouKnowIGotSoul: What was the biggest lesson you learned coming from that Roc Nation situation?

Bridget Kelly: I think the biggest lesson I learned was that people will only help you if you help yourself. There were signs everywhere and I don’t think I paid enough attention to enough of them of just researching and collecting the information myself and seeking out answers on my own. I think I relied heavily on the teams that were around me and they didn’t necessarily know any better either. I feel like I kinda played myself in a way because I didn’t educate myself enough. I think now my most powerful education has been the experience of it all. It’s a gift and a curse but at this moment and time, I’m the most happiest and most confident I’ve ever been as a woman and as an artist. So anything that I’m doing from here on out is straight from the heart.

Bridget Kelly: I’m excited, I’m really happy. So much thanks to Tom and YouKnowIGotSoul. I think you guys are incredible with what you do and I really appreciate that you guys have a true passion and respect and appreciation for r&b/soul music. I just appreciate that support!