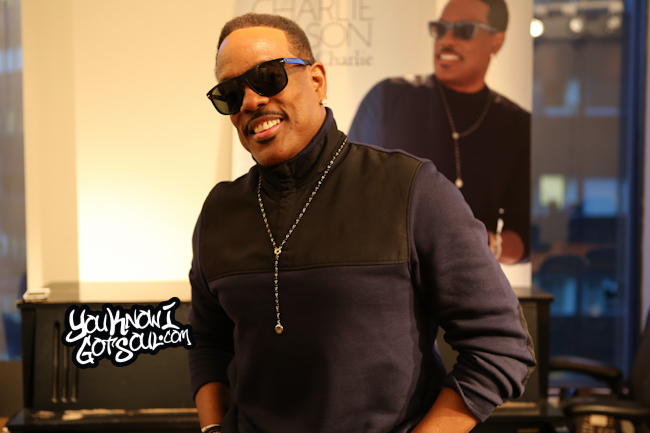 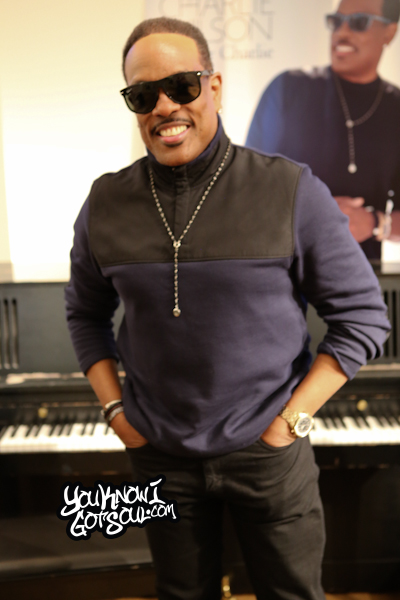 Charlie Wilson is one of our greatest living legends, there is no disputing that. For someone to be successful over the course of the past 5 decades and create quality music at the highest level is unheard of. And he’s done all of this while constantly influencing many who came after him. Oh, did we mention his live show is one of the best you’ll find in r&b? Now that he’s released his new album “Forever Charlie”, which we gave a great review to, it should be cause for celebration of more good music and the career of one of the best. YouKnowIGotSoul sat down with him while doing promo in NYC and discussed his involvement in the creative process, his motivation to keep creating, who influences him now, what goes into his live show, and much more.

YouKnowIGotSoul: Talk about the creation of your new album “Forever Charlie”.

Charlie Wilson: We really actually planned everything out to the tee. It seems like everything is just unfolding like we actually thought it would. I wanted to make records that had a lot of feel to it, substance and meat and potatoes as I always say. I didn’t want to try something that was out of my league, but I wanted it to be something special when people hear it. Each song and how it’s sequenced and how it would feel if everyone listened to the record from top to the bottom, you wouldn’t have to necessarily skip over records until you found one that you liked. On the way down to the one you really liked, it was a nice ride to that spot. We carefully planned and put that together.

YouKnowIGotSoul: At this point in your career, how involved are you in the creative process of your albums?

Charlie Wilson: It starts with me first. *Laughs* I’m at the top of everything and everything has to go through with me on that particular part. I’m feeling the guys that we have signed to P Music Group, I trust these guys. For instance when I give you a word or a concept, these guys come right back to me with something like “No, don’t go out of the lane”. They know what I’m about and what I love to do. It’s a special connection with the people I have around me. This time I even got Jimmy Jam & Terry Lewis which was incredible. We had a lot of fun writing and it was great.

YouKnowIGotSoul: You’ve been doing this so long at the highest level, what’s your motivation to keep making quality music?

Charlie Wilson: I’m not selfish but I’m not finished. I just wasn’t finished and I don’t want to say I didn’t get a chance to do whatever I did when I was 19, but I’m so amped and geeked about continuing this legacy of good music. A lot of people don’t get a chance to give some quality music and I have this passion and this boy spirit inside of me. This boy spirit drives this man and the boy understands the man part of it and the man understands the boy part of it. We protect each other. It’s a fine line between this whole thing and how to be creative and not overstep your boundaries.

YouKnowIGotSoul: You’ve influenced so many artists over the course of your career, but who currently influences you?

Charlie Wilson: Currently, there are so many people out there that are blazing trails. Some of these kids are doing it for the generation and that’s okay. I’m happy for them now and I hope that they can find the time to search themselves really well and set yourself up for the future. You have to find something that’s going to live for 20 years, so the people your age right now, when you guys grow up, they can tell somebody about this particular record or album. When you just have the “now” record, it isn’t going to be around in 20 years. You’re going to have to get something that has some substance and a real song with real nice lyrics and some chord changes. It has to be beautiful stuff. There’s a lot there and I don’t have one person in my iPod. It’s so easy to steal music and when I’m doing a record, my iPod is blank except if I’m listening to some old GAP Band stuff to see how I was singing and how I was feeling. I just try to recreate my life, but I don’t listen to anybody because I might steal something and I’m getting sued because I thought I made it up or created it, but it was something that I heard and got in trouble for it.

Charlie Wilson: It’s just a passion and love I have for music. I love to celebrate women and I love to say something that a woman really wants to hear. If a guy can adapt to some of these lyrics and say that to his girl instead of making a booty call, she’s going to flip out. She’s going to be like “Wow, I don’t need anything else!” That brings tears to my eyes. He’s not making a booty call, he’s making a call to her like “I need you by my side”.

YouKnowIGotSoul: You’re going on tour with Kem and Joe. Talk about the tour a little bit.

YouKnowIGotSoul: What goes into making your live show so good? You always have so much energy on stage.

Charlie Wilson: First of all, it’s the integrity. What I love about performing, I have to be careful because it’s so easy for me to learn how to do something that somebody else is doing to make it look like I’m something that I’m not. I don’t purposely learn a lot of the stuff or dances because it would not be me. I’m going to be sweaty and I’m going to do something gritty. I’m going to give my all, but it’s just the love and passion that goes into it. We’ve worked really hard to figure out what the next thing is for me on the stage. I’ve got a great family around me and everyone pitches in.

YouKnowIGotSoul: What are your future goals?

Charlie Wilson: I have a list of things that I expect from myself to do and achieve. That list, some of the list has already been achieved, there’s some things that I’m going to do and that I will do and then there are some things I want to do. I’m just going to knock them off one at a time.

YouKnowIGotSoul: How do you capture “a good time” in your music?

Charlie Wilson: Like I said before, it’s the passion that I have for wanting to record and wanting to sing. My wife is like Quincy Jones. She really gets on my nerves sometimes. *Laughs* I could start singing for the first hour and then she’ll come in the other room with a finger up like this and then she’ll say something to the producer or engineer. Then I’ll just say “Okay, push the button down so I can hear what she’s saying”. She’ll be like “Could you put a little more feel to that because you’re not giving all you have. I’m a woman, so sing to me. You’re just going through the motions, will you sing this with some passion?”. She’s like right there and maybe 20 minutes later, she’ll be like “That’s what I’m talking about. Now you’re singing!” There’s no way around it, so every aspect I’ll have somebody there to lift me up. It’s so easy to go through the motion and just put something on the record, she won’t allow it. I have a great team, Team Charlie is really great.